Raymundo Escamilla isn’t interested in taking shortcuts. When we meet outside his tortilla factory on San Antonio’s West Side in February, Escamilla, 62, is dressed in a striped button-down shirt, with a pair of reading glasses folded and tucked into the collar. He’s wearing wrinkle-free jeans with an uncreased brown leather belt, and polished cowboy boots. The overall effect is sharp but not fussy, giving Escamilla the air of a gentleman who is refined but unafraid to work. That could mean hauling bags of Texas-grown corn to the factory’s small back room to get the nixtamalization process started. This is the long, slow, difficult way to make tortillas—and it’s the reason that the San Antonio Colonial tortilla factory has such a loyal following in San Antonio and Austin, plus a growing mail-order business that even ships internationally.

The factory is an unassuming yellow stucco building on the corner of Guadalupe and Cibolo streets. Inside, a couple of metal troughs are filled with corn kernels and an alkaline mixture of water and calcium hydroxide that’s sometimes called slaked lime. Burners under the troughs heat the water and cook the corn. The tortillero (tortilla maker) uses long metal paddles to swish around the corn and water, allowing for even cooking. All the while, the temperature of the water is closely monitored. These are the first steps in the overnight nixtamalization process.

The next step is to allow the corn to steep in the liquid, with occasional stirring. After the cooking has separated the hull from the inner kernel and released the corn’s locked-away nutrients, the water is drained from the tanks and then milled into masa (corn dough). The masa is squeezed into the feeders of mechanical tortilla machines that flatten the dough and cut and par-cook the tortillas into miniature, three-inch discs ideal for doubling up for the ever-popular street-style taco. Escamilla’s team also makes larger discs, some of which are flavored with powdered nopales or chiles. Off to the side are trays of chicharrones—large twists and blocks of fried pork skin with crunchy outer layers and soft luscious interiors. Fat chiles rellenos might also be available. Escamilla wouldn’t have it any other way. This is family tradition.

“My father was a tortillero. I’m a tortillero, and my children are tortilleros,” he says. Escamilla grew up in Mexico and moved to the United States at age fifty. “I saw what was likely my last opportunity to move here and took that opportunity,” he says. “I didn’t want to live with regret.” When he first opened his tortilla business in 2011, Escamilla had the capacity to make only 15 packs of tortillas per day. Now Colonial produces 20,000 to 25,000 packs of tortillas per month.

The Colonial tortilla factory takes its name from the previous occupants of the building, whose façade is decorated in the hand-painted lettering that has come to be characteristic of Mexican businesses on both sides of the border. The words and the style, known as rotulista in Spanish, announce “100% Nixtamal” and “Especialidad tortilla para mini taco” (or specialty tortillas for mini tacos) to passersby. The screen door shuts with a sudden clack when let go, but more importantly, it allows for the earthy, ancient fragrance of fresh corn tortillas to waft onto the street, tempting anyone who might be walking by the shop to enter to purchase a package for a home taquiza (a taco party) or a family feast.

I was easily tempted, and so are the occasional retail customers who slowly and quietly amble in while keeping their distance. Even during the COVID-19 pandemic shutdowns, Escamilla and his staff, including family members, continued to turn out packs of tortillas for home use and for commercial clients, among them street-style taco specialists El Remedio and Taquitos West Avenue, both in San Antonio, and Cuantos Tacos in Austin.

At Taquitos West Avenue, Colonial’s mini-taco tortillas are a straightforward choice for classic fillings such as al pastor sliced from an umber-hued trompo, glistening cabeza, and the workhorse of the taqueria world: chopped bistek. Tortillas made from nixtamal lack the chemical additives that give shelf-stable commodity tortillas their long life, not to mention their lingering bitter chemical flavors. “They’re more natural and don’t have the bad preservatives,” says Taquitos West Avenue general manager Gustavo (who declined to give his last name).

That’s what Escamilla is going for. “This type of tortilla had become foreign [in Texas]. It had been forgotten,” he says. “We had to create a demand for the traditional Mexican tortilla, which is the one made from nixtamal, the one made without preservatives, that isn’t harmful to your health,” he says.

It’s at Taquitos West Avenue that Luis Robledo, an Austin-based taquero, encountered the perfect foundation to the Mexico City–style chorizera-cooked tacos that would become the signature of his food truck, Cuantos Tacos. “I could smell the whole nixtamal process from the tacos on my plate. I was halfway through my order and thought, ‘These were it,’” he explains. “So I talked to the taquero to see if I could figure wherever they’re from. He was really cool, told me the name of the place, and gave me the business card. … I went straight to the factory and knew right away. Even the lettering was straight out of Mexico.” Robledo has made twice-weekly trips to San Antonio to buy hundred-count packs of mini tortillas from Escamilla.

As recently as February, he thought the drive would go from ninety minutes to a few minutes down the road. Before COVID-19 restrictions closed restaurant dining rooms in March, San Antonio Colonial Tortilla Factory was a few weeks away from opening a second location in East Austin on Manor Road. Now plans are on hold indefinitely.

But what is certain is that San Antonio Colonial, although new to the Alamo City’s packed tortilleria scene, is making a lasting impact with a product that maintains the ancient tradition of tortilla-making. “Little by little people are remembering their forefathers and the people are returning to the tortilla, to its flavors and healthfulness,” Escamilla says. “In turn, they’re serving tortillas with their meals. They’re making tacos, chilaquiles, flautas, tacos dorados. They are discovering traditional Mexican cuisine.” 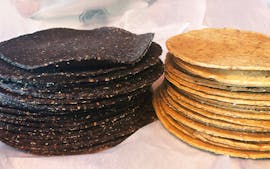 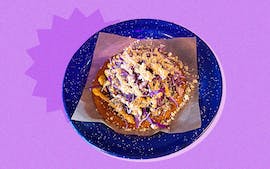