I jockeyed my car into a parking space on the street, sauntered down the sidewalk, and smugly flung open the aluminum screen door. Wait! What?! Nooooo! Ten people were in line at my hole-in-the-wall taqueria! “The nerve!” I sputtered. “Where did they come from?” Since its opening early last fall, tiny Nixta Taqueria and its house-made corn tortillas and unconventional toppings—soy-and-citrus-cured tuna crudo with chipotle mayo, roasted butternut squash with pickled Fresno chiles—had been a secret known only to a lucky few. Or so I thought. Obviously, since my last visit, somebody had spilled the refried beans. Annoyed, I joined the line, praying that the kitchen wouldn’t run out of its decadent duck confit tacos before I had a chance to order.

Nixta occupies a squat cinder-block building about a mile away from Interstate 35 in a part of East Austin where new condos and modern homes seem on the verge of overtaking the older modest dwellings in a close-knit neighborhood. The taqueria’s thirtysomething owners, who are partners in business and life, live in the area but inevitably spend most of their time at the restaurant: chef Edgar Rico presides over the semi-open kitchen, while congenial manager Sara Mardanbigi runs the front of the house, taking orders and pouring aguas frescas. The dining room is small—about twenty seats—with a striking mural depicting multicolored ears of corn splashed across one wall. As its name implies, corn is the patron vegetable of Nixta. Every day, kernels sourced from Oaxaca and Dripping Springs’ Barton Springs Mill are soaked and ground into masa, a process called nixtamalization (“nixtamalli,” in the Aztec language), to make superlative tortillas.

My order placed, I joined my friend Karen, who had found a table and was nursing an horchata, the smooth cinnamony rice drink popular in Mexico. To placate myself after my long wait in line, I had opted for something a little stronger, a glass of natural red wine from Fredericksburg’s Southold Farm + Cellar. In just a few minutes, our food arrived. Because the menu is so short—eight savory offerings plus two paletas, a.k.a. creamy popsicles, for dessert—the kitchen turns out orders in record time.

I bit into the edge of my first taco (technically the beet “tartare” tostada), and the fragile thing shattered into a million little pieces. But the remains were just as good eaten with a fork: crunchy shards of fried yellow-corn tortilla, lush avocado crema speckled with grated horseradish, deep maroon squares of chilled roasted beets. The beets had been tossed in aioli punched up with nutty, spicy salsa macha. My second taco (duck—yay!) was relatively uncomplicated by comparison. The moist fowl had been slow-cooked in its own exquisite fat, then tricked out with pretty slices of onion, red-tinged radish, and dewy green cilantro.

Duck fat made a return appearance in the first of Karen’s orders, the enchilada potosina. It’s named for the Mexican state and city of San Luis Potosí, which is home to members of Rico’s extended family. The enchilada came layered with velvety, duck-fat-laced refried beans and was topped with dollops of pureed potato and chorizo. The bright garnish featured shredded red cabbage, a splash of roasted-tomato salsa, and the crowning glory, grated curls of a super-funky, chile-rubbed cheese that is made by an artisan in SLP who was friends with Rico’s late grandmother.

For her second dish, Karen went with the daily special, a chile relleno wrapped in a tortilla. Crisp-fried in crunchy tempura batter, the small Anaheim was stuffed with ground beef, raisins, aromatics, and spices and strategically dabbed with avocado puree. Like almost all the tacos here, it came on a dark blue enamel plate, a savvy Instagrammable touch. Also, like the other tacos, it was not cheap. Nixta’s prices range from $5 to $8, but the tariff is justified by quality and quantity.

The first couple of times I visited Nixta, I was so besotted with the seductive and surprising flavors that all I did was eat. But after I’d tried everything once, I was ready to ask questions, beginning with, How does Rico come up with this stuff? What’s his story? 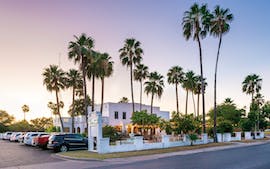 Turns out the man’s a highly trained chef masquerading as a taquero. Now thirty years old, Rico grew up in the Central Valley of California and started cooking when he was a kid (when he was twelve, he took over the family’s Thanksgiving dinner). After graduating from the Culinary Institute of America, in Hyde Park, New York, he worked for several of Los Angeles’s most prominent restaurants, including Trois Mec and Sqirl. Then, one day, he did the equivalent of postgrad field research: he climbed aboard a bus to travel the length of Mexico, prowling through markets, eating, learning. Although he had visited relatives in Mexico as a child, it was his first trip to the country as an adult. “When I got to Mexico City,” he says, “I literally knocked on the back door of Pujol,” which was and still is the most famous restaurant in the country. “I asked if they needed some help. They said, ‘Who have you worked for?’ Half an hour later I was in whites doing prep.”

Rico spent several weeks in the kitchen at Pujol before returning to the States. At loose ends, he made a decision. “I had been to Austin once, and there was just something about all the taco trucks there and how much people appreciated tacos,” he says. “I knew where I wanted to go.” It didn’t hurt that once he arrived, he met Mardanbigi, whose enthusiasm for food matched his own. They started dating, and in February of last year, when a small vacant restaurant on the East Side became available, they went for it. Eight months later, Nixta was ushered into the world.

When I was a kid in mid-century Texas, crispy tacos were just another snacky part of a Tex-Mex combination plate. A few decades later, immigrants had introduced us to a whole new world of exotic fillings (pork carnitas! beef tongue!). Now tacos have achieved perhaps their highest and best purpose: a platform for international cultural exchange.

So the next time I walked into Nixta after my lunch with Karen, I was not surprised to find a new daily special: a Persian mole taco. It was based on a beloved Iranian chicken stew called fesenjan and was rich with fragrant spices and sharp, musky pomegranate molasses; Texas pecans stood in for the more usual walnuts. Rico created it as an homage to Mardanbigi, whose heritage is Iranian. Given that Muslim culture prevailed in both Persia and Spain for centuries, a kinship between fesenjan and mole seems more than plausible. The next time I go back, I thoroughly expect there to be something else on the menu that’s both rich and strange (to paraphrase Shakespeare). I can’t wait to try it.

This article originally appeared in the February 2020 issue of Texas Monthly with the headline “Nixta Takes Tacos to The Next Level.” Subscribe today. 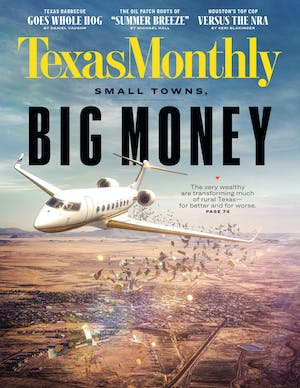