Few things in life are as satisfying as a superbly constructed sandwich. A sandwich can be a meal or a snack, suitable for breakfast, lunch, dinner, or bed at 2 a.m. Thanks to its endless range and versatility, there’s a sandwich to fit every palate. For some, a smear of creamy peanut butter between two slabs of brioche is enough to sate the appetite, while others prefer mounds of warm pastrami dripping with melted Swiss cheese. Whether you throw together the nearest meats and cheeses or spend hours braising a brisket filling, there is no wrong way to build a sandwich. The weight of the bread in your hands, loaded with fillings of your choosing, should provoke joy—and if it doesn’t, Texas chefs are here to help.

2020 left many people to their own devices in the kitchen, and many of us sought solace in the foods we chose to cook. Luckily for weary home chefs, assembling a sandwich doesn’t require an extensive set of culinary skills. Sandwiches don’t call for a bunch of fancy kitchen gadgets, so you can forget about a sink piled with dirty dishes. Sandwiches are fun. They’re straightforward. They don’t take themselves too seriously. And above all else, sandwiches are a comfort food. They can make you nostalgic for simpler times or provide an opportunity for innovation.

Most of us have a few go-to sandwich recipes (doesn’t everybody have a preferred way to make a grilled cheese?), but sometimes, especially after a year of at-home lunches and anxiety-fueled midnight snacks, the repertoire needs something new. To elevate our collective sandwich game, we asked seven Texas chefs from around the state to share a recipe that reflects their cooking style. There are melted leeks atop thick slices of bacon, mangoes that mingle with peanut butter and mint, and, yes, even a take on grilled cheese. The results are personal, playful, and most important, delicious. Here’s hoping they provide you with a taste of perfection.

The old-school combination of peanut butter and jelly has never appealed to Anita Jaisinghani, the chef and co-owner of Houston’s Pondicheri. “It’s too sweet, and I found myself wanting to add something spicy to it,” she says. After playing around in her kitchen, the chef came up with her own rendition of the classic pairing, drawing upon the ingredients and spices of Indian street food she uses at her restaurant. The result is the PBP sandwich: warm slabs of sourdough slathered with crunchy peanut butter and then layered with sliced mango, chopped herbs (cilantro, basil, or mint, depending on what’s available), and masala-coated Indian pickles. This sandwich is bursting with complementary flavors and textures and is way more fun to eat than the brown-bag lunch staple that inspired it. 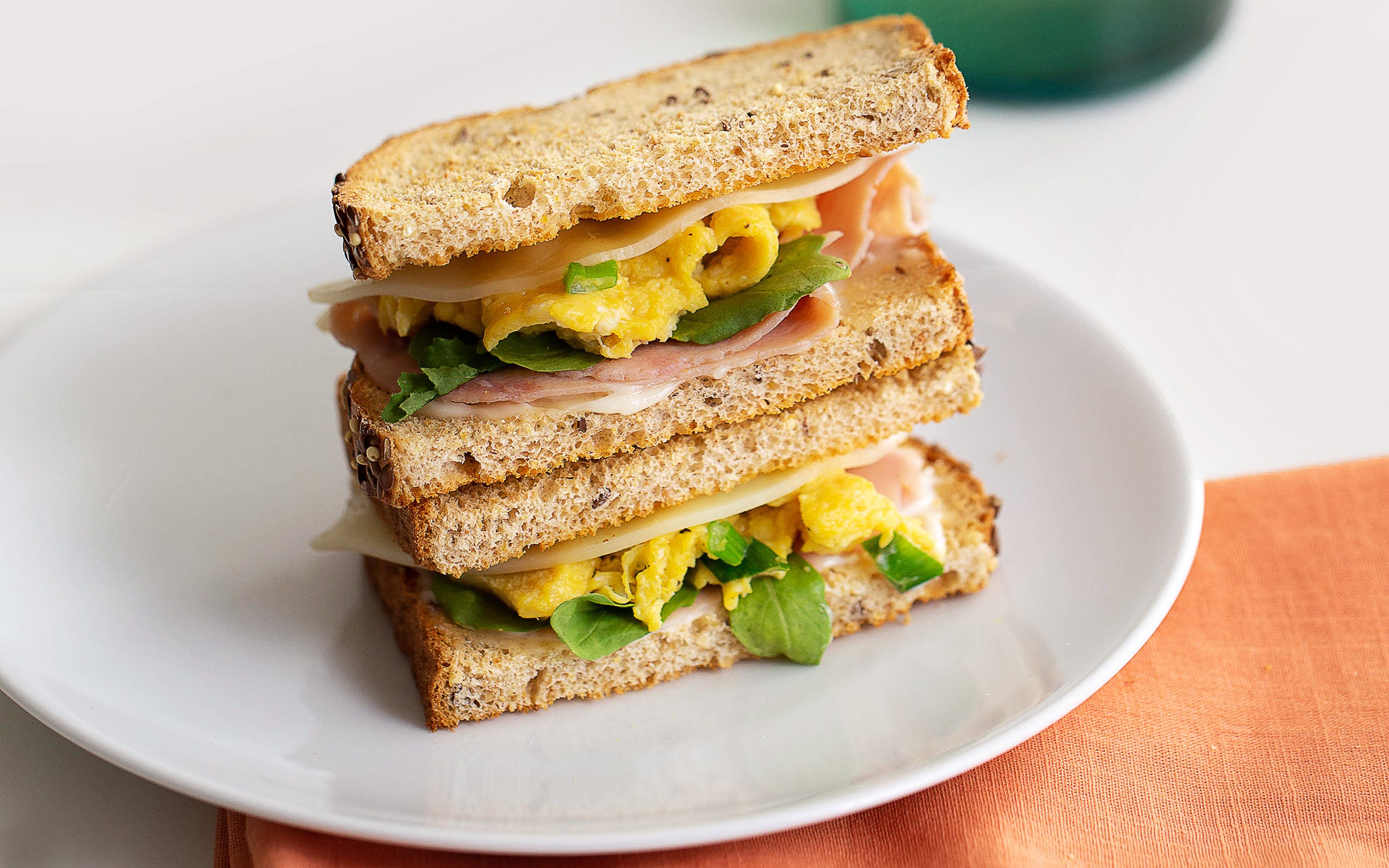 Scrambled eggs served over rice with soy sauce was a breakfast staple in Donny Sirisavath’s Laotian home growing up. One morning, when the chef was around seven years old, he recalls scooping up the sauce-drenched eggs with two pieces of bread as he ran out the door to catch the bus. Even as a child, he was taking inspiration from his mother’s dishes and forming them into his own. His Dallas restaurant, Khao Noodle Shop, is an homage to those formative years spent in the kitchen learning her cooking techniques, and this sandwich is a slightly reimagined ode to those egg-filled mornings.

2 pieces of wheat bread
1 garlic clove, chopped
Oil of your choosing
2 eggs
1 scallion, chopped
1 teaspoon soy sauce
Freshly ground black pepper, to taste
Mayonnaise (however much you’d like on your sandwich)
1 lime wedge
1 or 2 slices of provolone cheese
1 or 2 slices of Vietnamese ham (regular ham is fine too)
1 tomato, sliced
Handful of arugula

Iliana de la Vega grew up eating tortas. She praises the Mexican sandwiches for their versatility, as well as their portability. “Anything can go inside a torta the same way that anything can go inside a taco,” she says. “And they travel well—you can eat them in the streets.” While the former is true for her torta de pollo adobado, the latter is up for debate. (You might want to have a tub of baby wipes and a spare shirt handy if you plan to eat this while walking.) This gussied-up torta touts a piquant blend of poblano peppers, mashed avocado, refried black beans, and marinated chicken. It’s a nod to the traditional Mexican fare served at the chef’s Austin restaurant. “I think it combines a little bit of everything we like and what people expect from Mexican cooking,” she says. “It’s easy to make and it’s also super delicious. The flavors are out of this world.”

The most important component of a BLT, according to Houston chef Mark Clayton, is the tomatoes. But there are times, for instance in midwinter, when getting one’s hands on ripe, garden-grown beefsteaks or luscious Black Krims isn’t possible. This sandwich, which the Houston chef describes as a “slightly reimagined version of a BLT,” takes the stress off finding the perfect, plump tomato. The fruit is sliced thin, making it suitable for all seasons. Melted leeks, marinated tomatoes, and toasted tomato paste surround thick cuts of crisp bacon. While the sandwich is based on a simple classic, the recipe requires a bit of patience, a smidgen of skill, and lots of pots and pans. It’s just the type of elevated comfort food you might find on the upscale European menu at Squable, which we named one of Texas’s best new restaurants in 2020.

For the braised bacon:

For the toasted tomato paste:

For the melted leeks:

For the marinated tomatoes:

To assemble the sandwich:

John Russ doesn’t mess around with boring cheddar. Not even when he’s building a grilled cheese at home for his wife and kids. “It’s not within the realm of what I do,” he says. And so, when a sample of Tickler cheddar arrived at his family-owned, Southern-oriented San Antonio restaurant last year, he was instantly sold on its sharpness and depth. He had a surplus of duck confit at the time, having just taken it off the restaurant’s menu, and this sparked an idea: he would make a sandwich. “It’s just such a fun way to utilize two products that would generally not meet.” Tender shredded duck and melted cheese meld together on toasted sourdough bread. Russ suggests pairing it with a light salad. We suggest licking your fingers clean.

Brisket and Egg on a Roll

Mark Scott fell in love with the bodega-style egg sandwich while in Manhattan on a work trip last February. After returning home to Marfa, he realized there wasn’t anything like it in town. “If I wanted it, I would have to make it myself,” he says. And so, he did, but with some Texas tweaks. He says he often has extra brisket lying around in his fridge (must be nice!), and one day he sliced some up and added it to the sandwich. He also added cream cheese, hot sauce, and fresh basil from his wife and business partner Kaki’s garden. Being a pitmaster at a popular barbecue joint like Convenience West is laborious, and some days he’s on his feet for fifteen hours with barely enough time to cram in one quick meal. He’s found that this sandwich is substantial enough to hold him over while also satisfying his desire for something delicious. New York bodegas got nothing on this.

Misti Norris, Petra and the Beast

Growing up, Dallas chef Misti Norris’s favorite sandwich was American singles and turkey on white bread with mayonnaise. Now that her palate and skills have evolved, she’s pushing the boundaries of bread and cheese. The result is a sandwich she terms the embodiment of solace squished between two slices of bread. “It’s just a comfort food kind of thing,” she says. “It’s everything I like.” Rich and fatty pork rillettes are fried and topped with collard greens, cheese, and a dill pickle emulsion, then stacked between pan de cristal, or a country loaf if you prefer. The dish is rich, acidic, and akin to the locavore fare Norris serves at her Dallas restaurant.

For the pork rillettes:

For the dill pickle emulsion:

To assemble the sandwich: