In the waning years of the twentieth century, Schlotzsky’s was a winner. The chain, launched in 1971 from a spot on Austin’s South Congress Avenue, didn’t have anybody named “Schlotzsky” involved, but it did spawn a franchise model that spread nationwide. By 1981, there were one hundred stores. At its peak, in 2001, there were more than 750.

Things went south after that. The company declared bankruptcy in 2004 and was acquired by Atlanta’s Focus Brands—which also owns Cinnabon, Auntie Anne’s, and Seattle’s Best Coffee—in 2006. Schlotzsky’s hasn’t been Texas-based in more than a decade, but it’s touting its Austin roots with a rebranding that it began testing three years ago.

According to the Austin Business Journal, over the next three months, the 350 or so remaining Schlotzsky’s restaurants will be renamed Schlotzsky’s Austin Eatery. The chain has experienced success with the concept at more than a dozen stores in a handful of markets, including one in Bee Cave, since 2016. On its website, the Georgia-based company explains that, “We were born and raised in Austin since 1971. We’re not just Austin-inspired. We are Austin. And we needed a name that no one would soon forget.” With its new menu, Schlotzky’s Austin Eatery will be a place “where we experiment with flavors. Where we mix things up. Where we live, breathe, and devour what this town’s all about.”

That sounds pretty good, so we decided to take a look at the menu to see how well Schlotzsky’s is encapsulating Austin. Let’s consider these offerings:

The Pastrami Stacker is exactly what it sounds like: pastrami, Swiss cheese, sauerkraut, Thousand Island dressing, and Schlotzsky’s “signature sauce,” on dark rye bread. It doesn’t sound bad, but it doesn’t sound all that Austin-thentic either. Our state’s capital isn’t known for its New York-style delis.

Fun fact: The French dip sandwich doesn’t come from France. Sadly, however, it doesn’t come from Texas either. The history of the sandwich is notoriously contentious, but the two restaurants that claim to have originated it are both in Los Angeles. While some variations use brisket, which would be a nice Austin-y twist, Schlotzsky’s menu just says it uses “roast beef.”

Austin-ticity Rating: 3/10. Giving an extra point on the off-chance you can get it with brisket.

This is more like it. The brisket is hickory-smoked—more East Texas than Austin, but we’ll allow it—and served with a host of toppings that you’d never find at the Salt Lick (let alone Franklin Barbecue), like cheddar and mozzarella, roasted red peppers, lettuce, chipotle mayo, that “signature sauce” again, pickled jalapeños, and salsa verde. It’s not exactly an Austin specialty, but “Austin-inspired” sounds about right.

Austin-ticity Rating: 6/10. A brisket sandwich is as Austin-y as claiming to have invented the breakfast taco, but the toppings are bit much.

Getting weird here, with these sliders. The hickory-smoked brisket is back, this time with provolone, jalapeños, and—wait for it—apricot cream cheese and jam. That sounds…not terrible, maybe? Austin’s proud of keeping stuff weird, so putting cream cheese on your brisket slider fits the city’s aesthetic in a certain way.

This is a “tin,” according to the menu, which is like a bowl, but, uh, served in tin? Whatever a tin is, mac and cheese + brisket + jalapeños + BBQ sauce = yep, absolutely. This one also adds roasted red pepper (less common, but not shocking), cilantro (more California than Austin), and chipotle pesto (ehhh), and house-made garlic breadsticks. We could imagine encountering this at any number of slightly overpriced restaurants, so we’re feeling it.

Austin-ticity Rating: 8/10. We’d order it after waiting way too long for a table if we saw it at a restaurant in Austin.

Adding tacos to the menu is a must if you’re marketing yourself as an “Austin eatery,” but Schlotzsky’s doesn’t go traditional with their three taco options. The “Hawaiian” in this one’s name refers to the pineapple kale slaw, which is wrapped into a tortilla with brisket, mozzarella (weird cheese choice, but OK), BBQ sauce, and crunchy tortilla strips. It seems like something you might find at one of Austin’s more experimental taco spots.

Austin-ticity Rating: 7/10. Could imagine ordering this at Tyson’s.

Maybe this is for all the people who moved to Austin from Los Angeles? It’s a flatbread—a pizza, basically—with chicken, bacon, mozzarella and cheddar cheese, cream sauce, avocado, red peppers, cilantro, and—sure—chipotle mayonnaise. It’s a holdover from the previous Schlotzsky’s menu, but it’s decidedly out of place in a place that aims to emphasize its Texas roots.

Austin-ticity Rating: 1/10. What Texan doesn’t put mayonnaise on their pizza?

Not a whole lot to say about the salad—chicken, bacon, goat cheese, avocado, jalapeños, tomatoes, cilantro, and croutons—all of which are things that any number of restaurants in Austin or anywhere else might serve. 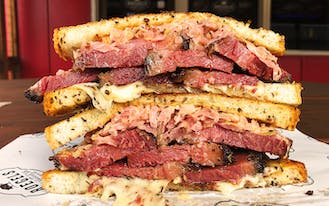 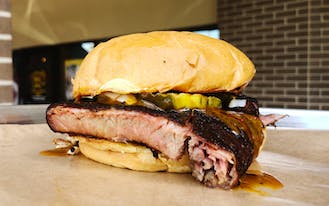