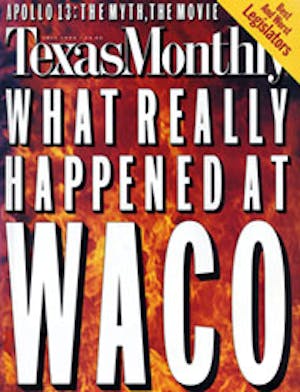 On Memorial Day, most Texans lounged around the back yard in their shorts, popped open some beer, and flipped a few burgers. For Sarah Bishop, the chef at the Governor’s Mansion, the day was a little different. She arrived just after six that morning and prepared what she calls a simple breakfast for the bush family: scrambled eggs, homemade buttermilk biscuits, and scones. Around noon, she made a quick lunch for George W. and Laura Bush, and then she really got to work. The governor was hosting a luncheon for 13 people the next day and a party for 24 at the end of the week. The holiday didn’t matter.

Bishop, 34, got used to working traditional days off quite a while ago. Slim as a reed despite the constant temptation of buttery little puff pastries and other party good, she has cooked at the mansion since 1987, when she was hired by then-chef Larry Adams. When Adams left in 1989, Bishop stepped into his position, and she has run the kitchen ever since—meaning she has prepared meals not just for the Bushes but also for Bill and Rita Clements and Ann Richards. For several years, she did lunch and dinner; these days she does lunch, another chef, Katy Russell, handles dinner, and the two collaborate on parties and banquets.

On a balmy spring day, Bishop sat calmly at a round table in the surprisingly homey, high-celinged kitchen of the mansion as sunlight poured into the room. She smiled a lot, didn’t fidget, looked at her visitor with clear hazel eyes, and never referred to any of the governors by their first name. She spoke with the confidence of someone who has catered to a succession of chief executives with very different tastes.

“I did a traditional, continental type of cooking for the Clementses,” she said. “Cream sauces and French demiglace-based sauces, green peppercorn sauce-that sort of thing. When it was just Governor and Mrs. Clements, though, I would do simpler dishes, like baked or broiled fish. Also, he loved meat loaf and apple cake.”

When Richards was elected in 1990, Bishop adapted to a boss who ate out many nights and like to try a variety of cuisines. “Eclectic is how I would describe Governor Richards’ taste,” she says. “For her, I was doing nouvelle California, Tex-Mex, things with a Thai influence, like soft spring rolls. I also tended to do more salads, more one-plate lunches. She has a real sweet tooth, so we mad lots of desserts; one of her favorites was crème brûlée with a candied-ginger topping.”

Bishop hasn’t yet figured out what the Bush clan like since they’ve been in the mansion for only a few months, but she’s trying. “For Governor Bush, we do American food with a little Asian and a little Tex-Mex, like, say, a tomatillo sauce. We mix it up, maybe some Southwestern cuisine and some French for the fancier stuff. Of course, a lot depends on who’s coming to lunch.”

Despite her high-profile job, Bishop never intended to be a chef. But looking back, she sees that the seeds for her future career were planted early, while she was growing up in Houston. “My mother and grandmother laugh because when I was little, I was always in the kitchen,” she says. She picked up the fundamentals from her mother, but as a child her real passion was art. “I was completely focused on it. I remember once when some friends were visiting, my mother said, ‘Sarah, you’ve got to stop painting now. Your friends are going to get bored and leave.’”

The obsession has eased considerably, but Bishop likes to keep a hand in the art world. She has some interior design work and a commissioned painting going on the side, and she recently did the interior of Dolce Vita, an upscale gelato and espresso bar in Austin’s historic Hyde Park neighborhood. The walls are painted in bright elongated diamonds, precise and playful at the same time. In keeping with her avocation, Bishop also has a bohemian streak. She wears a jeweled stud in her nose (and has for seven years), which prompted Governor Bush to wonder if she were making a statement of some sort. Contrary to rumor, he did not request that she remove it.

Although Bishop earned a bachelor of fine arts degree from the University of Texas at Austin in 1983, one of her first jobs after graduation was at Jeffrey’s, the upscale Austin restaurant. She stayed there nearly ten years, waiting tables, doing food prep, working as a line cook, and eventually running the pantry, where the appetizers, salads, and desserts were prepared. “Texas was just on the brink of discovering food back then,” she says. “It was the time of that food explosion, and it was great to be part of it. I learned a lot at Jeffrey’s, and I was also reading cookbooks and food magazines, just diving into it.”

A few years after she started at Jeffrey’s, she began to work at the mansion as well. She brought a spirit of experimentation, but she found tradition, if not stodginess to be strongly ingrained. “The food was like hotel food, you know, heavier, cheesier—dinosaur food,” she says. Little by little, she changed the status quo, never pushing, never doing anything too outré. “I like to think I have brought the kitchen here up to speed and added a flair, at least in terms of the way the food looks, lightening it up and bringing it into this century, she says.

At the same time, she’s found that her own attitudes have changed. “I was a bit of a food snob. I would say, ‘Oh, look at the gelatin in that.’ But given the nature of this job, you don’t do cutting-edge things. We put more of a Southern graciousness into our cooking because this is the mansion.”

Even after six and a half years, people often ask Bishop where she gets her ideas. Her answer is: everywhere. She regularly consults Bon Appétit and the New York Times Magazine and keeps dozens of cookbooks in the mansion kitchen, but her most reliable sources are the loose-leaf binders of recipes that she and her predecessors have collected over the years. From those files, here are four favorite recipes she prepared governors Clements, Richards, and Bush.