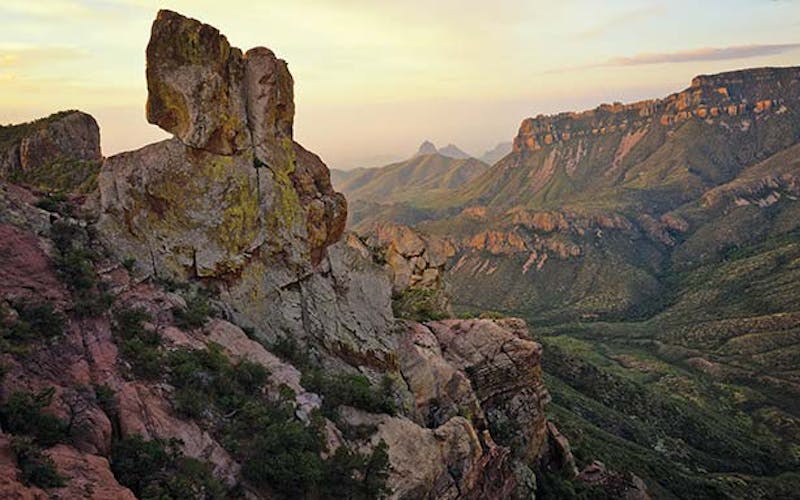 For a lot of my neighbors in Houston, the very notion of climbing 1,100 feet over two and a half miles is reason enough to have one’s head examined. But what do they know? Lost Mine Trail’s terrain may be rugged, but you don’t have to be an expert to tackle it. Switchbacks lead up through a cool forest of mixed oak, pine, and red-bark madrone—a line of trees that marks the start of a mountain ecosystem unique to Big Bend—and loaner booklets available at the trailhead offer lessons on the other flora and fauna you’ll encounter, including the drooping (or weeping) juniper, a wilted-looking specimen found nowhere else in the U.S. Then there’s the exhilarating finale: a wide stone saddle at 6,850 feet, from where you can stare out in all directions.

There’s so much territory to cover in the park that, as a general rule, I avoid retracing my steps, but a recent visit to this apex prompted me to rethink my strategy. To the southwest rose the backside of Casa Grande, a massive volcanic butte that stands guard over the Chisos Basin; to the southeast stood Lost Mine Peak, where rumors of secret stores of gold and silver ore, discovered by the Spanish and then hidden by Indians, have prompted many (fruitless) searches. Exhilarated by the jutting cliffs and top-down view into lush Juniper Canyon as well as by the sudden appearance of a red-tailed hawk, I quickly reversed another rule: my moratorium on selfies.