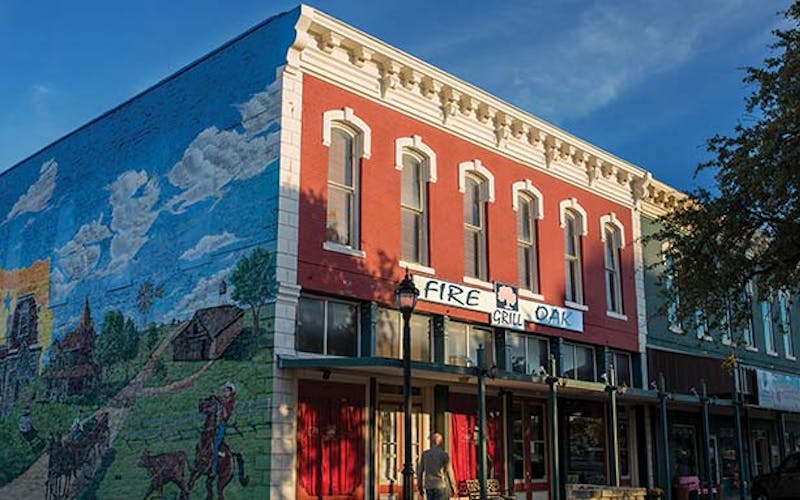 It’s hard to compete with the beautifully restored Second Empire–style Parker County courthouse. But the red-brick facade of Fire Oak Grill will likely catch your eye as you wander the square in the town of Weatherford, birthplace of Peter Pan actress Mary Martin and final resting place of cattle driver Oliver Loving, thanks to a very long haul at the hands of his dedicated friend Charles Goodnight.

In the dining room, heavy red drapes and Western oil paintings complement the creaky wood floor and pressed-tin ceiling; the bar area is outfitted with taxidermy and antlers (never mind that some of the cocktail names, like the Flirtini and the Kosher Pickletini, might prompt a real cowboy to swear off drinking). At the helm of the seven-year-old restaurant is chef Eric Hunter, who brings both skill and thought to his menu of loins and filets and chops of all stripes. Loaded baked potato soup, too often a crowd-pleasing cliché, comes gloriously amped up with house-cured bacon; a peppery New York strip is seared to a beautiful medium-rare and served with savory bread pudding; pecan-coated trout arrives with perfectly cooked haricots verts, garlicky whipped potatoes, and a jalapeño cream sauce.

Bringing it all home is the attentive service: a wedge salad split in the kitchen, silverware replaced with each course (wonders and miracles). Throw in live music on Thursdays, enticing lunch offerings (like cornmeal-crusted-redfish po’boys), and a mighty fine cucumber-jalapeño margarita and you’ve got a small-town restaurant that’s much better than it has to be. —Courtney Bond

Stay: Ten minutes from downtown is Pecan Bottom Ranch, a lovely retreat on fifteen acres of pastureland. Your domicile is one half of a stone horse barn, in which you may detect a whiff of eau de equine, but it’s a clean and tastefully decorated space that includes a king bed, a kitchen, and Wi-Fi ($110–$145, 817-797-3477).

Play: When you’re done marveling at the courthouse, take a stroll in the beautiful Chandor Gardens, designed by Douglas Chandor, English-born portraitist to the political stars (Winston Churchill, Franklin Roosevelt, Queen Elizabeth II), for his Weatherford wife; visit Mr. Loving and cowboy Bose Ikard (both of whom inspired Lonesome Dove characters) in Greenwood Cemetery; or go treasure hunting at the First Monday Trade Days (which should be called the Friday, Saturday, and Sunday Before First Monday Trade Days).