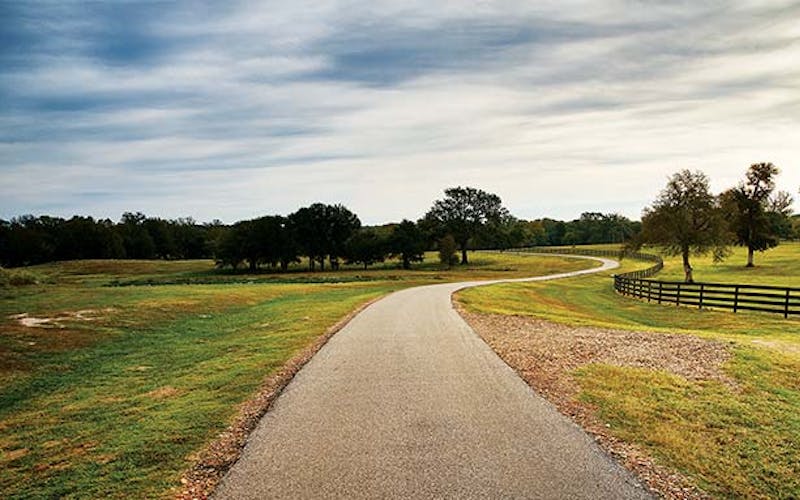 “I could get used to this,” murmured my friend as we drove along the narrow winding road, past open fields and stands of oaks, cypress, and pecan trees. Patterns of light and shade flickered across the windshield. We rolled down the windows and let the breeze in. The trees moved imperceptibly closer. What was that?! Oh, it was silence—I hardly recognized it.

But silence is obviously thriving here in East Texas, on 313 secluded acres that are home to the Inn at Dos Brisas. A luxury resort that boasts its own organic produce farm and seven-thousand-square-foot greenhouse, this oasis offers both serious pampering—wine tastings, spa treatments, carriage rides—and serious eating, in the form of a seven- to ten-course tasting menu courtesy of chef de cuisine Eric Fullem. The nine cottages were all booked, so my friend and I simply made reservations for dinner, pulling up to the Spanish-style main hacienda in the gathering twilight as a crescent moon made a grand entrance over the trees. Though Dos Brisas has been in existence only since 2004, the white stucco walls and red-tile roofs give it a historic veneer, an illusion that continued for us in the dining room, which is built around an eighteenth-century fireplace salvaged from France’s Loire Valley. We settled in at our table, happily distracted from our conversation each time a new jewel-like course arrived. The menu is eclectic but classically based, with a nod to the Deep South, and draws on the bounty of fruits and vegetables grown on the inn’s property. My favorite plate was the grilled branzino, with beautifully crisped skin, in a light and foamy jus composed of ricotta whey and a rich fish fumet. My friend loved the rare fallow venison medallions with sweet potatoes three ways (one of which was a clever multilayered roll). A warm, soft-cooked yard egg came shingled with thin-sliced Burgundy truffles, but the most adorable course was the amuse bouche, a teeny glass of warm, creamy pear soup. We were seduced and delighted. Next time, we vowed, we’d stay the night. —Patricia Sharpe

Stay: The four casitas start at $450 and include a continental breakfast; the five haciendas start at $890. If Dos Brisas is booked or too pricey, stay at the classy vintage Ant Street Inn, in Brenham, 14 miles away, or at the updated 120-year-old Red Velvet Inn, in Navasota, 18 miles away.

Play: Between the horseback riding and spa you may not want to venture off the property, but if you do, take a quick drive to the birthplace of Texas, Washington-on-the-Brazos State Park; ogle heirloom flower varieties at the Antique Rose Emporium, near Brenham; or shop in downtown Brenham and Navasota (don’t miss the latter’s eclectic French Market & Tokoly Tables Antique Shop). In Brenham, a tour of Blue Bell Creameries is mandatory.