No. 3 Tending the Ranch

How to wrangle a rattlesnake. 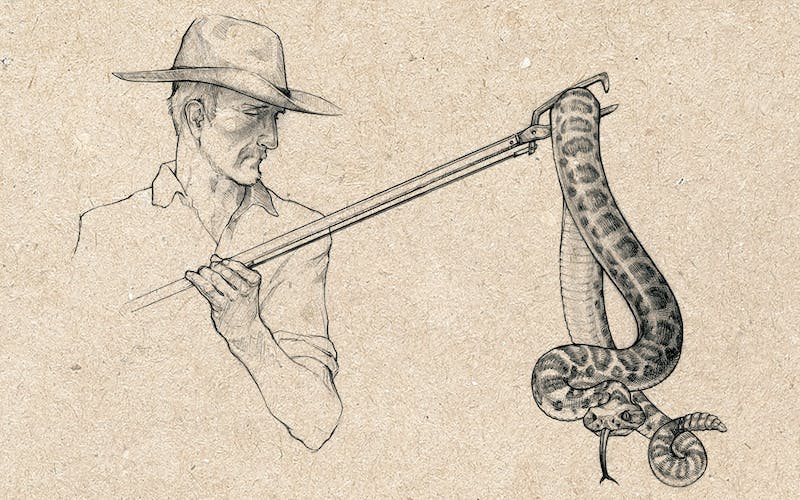 With some ten species and subspecies of rattlesnakes calling our state home, chances are you’ll find yourself face-to-fang sooner or later. “Essentially, if you’re in West Texas, don’t sit down until you’ve checked the ground within a three-foot radius,” says Tom Henderson, a former president of the Sweetwater Jaycees, the organization that hosts the World’s Largest Rattlesnake Roundup. So why wrangle a rattlesnake? Simply put, the catch-and-release method is more humane than a hoe to the head.

According to the American International Rattlesnake Museum, in New Mexico, about eight thousand bites from venomous snakes are reported in the United States each year. But don’t say your Hail Marys just yet; less than one percent result in death. Plus, a rattlesnake will usually warn you before it strikes with a low-pitched and unmistakable rattling sound.

Henderson insists on protective clothing if you’re traipsing around West Texas—leather boots (hard to penetrate) and long pants (preferably jeans). Also, invest in the right equipment. Professional snake handlers use a pinning hook, but amateurs should employ snake tongs, a long bar with a handle and a set of jaws on the other end. Depending on the snake’s length (they range from 36 to 60 inches), use the tongs to grip it around its middle or a third of the way down from its head to limit the striking distance. With your other hand, grab its tail above the rattle and carefully guide the snake into a large, lidded bucket.

If you’re going to dispatch the venomous thing, waste not, want not: have a tanner fashion the skin into a chic accessory, indulge in the delicacy of chicken-fried rattlesnake, or hire a taxidermist to memorialize the snake’s last tango. But don’t allow negative mythology to dictate your actions; snakes, after all, control rodent populations and rodent-borne diseases, so let your bleeding heart beat and release it into the wild.

Tags: Andrea Valdez, How to be Texan, Rattlesnakes, The Manual