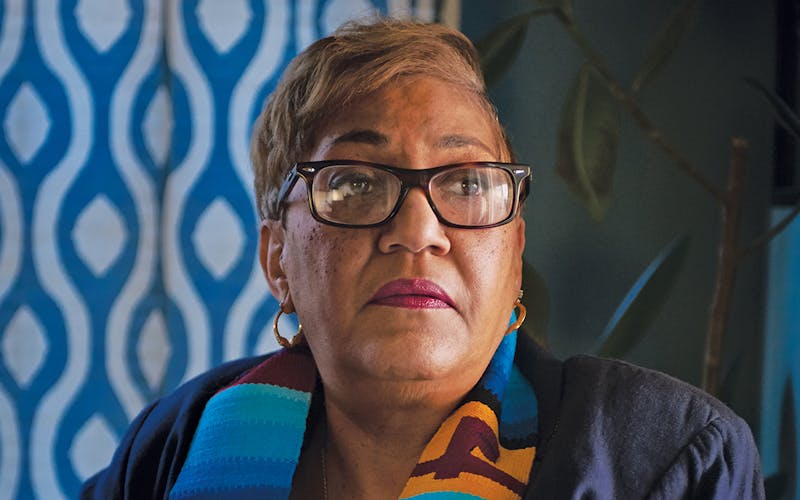 I grew up in Charleston, born and raised. When Martin Luther King came to Charleston, back in the late sixties, they had a banquet at the auditorium for him. I remember listening to Martin Luther King—not really being able to see him because I was sitting way in the back—but I remember thinking to myself, “One day I want to be able to stand up and talk to people like that.” I didn’t know it then, but that seed was planted in my spirit about being a communicator and being able to talk to people.

I have not lived in the city of Charleston in over 35 years, since I went away to college in North Carolina. I moved to Texas to attend Austin Presbyterian Theological Seminary. I started working at Parkland [Memorial Hospital, in Dallas] as a trauma chaplain in 2012. When a level one comes in to the emergency room, that’s my cue to get to the trauma area. Every two weeks, I see probably seven to eight patients who have had some kind of gun violence committed against them. And a lot of these guns that these people are using are not guns that were bought legally. They’re guns that were bought off the street. A lot of the time, you’ve got people who are being hurt by guns who are brought to Parkland, where there is no insurance required but they can get world-class care. So think about the amount of money that Dallas County is spending on people because of gun violence and because guns are readily available.

Last June 17, I was at work helping a family whose grandpa had died. I needed to go back to my office to get some paperwork. I had left my phone plugged in on my desk, and the spirit of the Lord said, check your phone. So I went over to my phone, and I had six missed calls from my daughter. I called her back, and she said, “Mom, there was a shooting at the church.” So I asked, “What church?” She said, “Granny’s church.”

My mom, Ethel Lance, joined Emanuel A.M.E. Church in 1974. If you were under her roof, you were getting up and going to church. She started working as a sexton there to make extra money less than five years ago. Her heart and soul were in that church, and she was proud to keep it clean and nice.

When I heard that something had happened at Mother Emanuel, there were going to be two possibilities: that my mom was going to be a witness or that she had gotten shot, because there’s nowhere she would have been other than that church. But I had to go back upstairs to the family who lost granddaddy without knowing really what happened.

When I finally got off work, I had to stop twice on the way home because I was too nervous to drive. I knew in my heart my mom was dead, but it wasn’t until about 2 a.m. that I had confirmation. For the next two days, I was in my apartment moving around in a damn fog. I was watching TV. I just had to see everything, because I kept thinking, “Maybe this wasn’t real.” I felt like I couldn’t miss anything, so I sat there by myself and watched TV.

That little boy [Dylann Roof] was just pure evil, that’s just all there is to it. I just don’t think, as a human, if you had planned to do something like that, and you went into that church where those people invited you, they opened their arms to you, and you sat there and listened to the word of God, and then you shoot them when they’re praying? That’s evil. My mother was the last person that he killed, the last one. And he also killed my cousins, Tywanza Sanders and Susie Jackson. I will never be the same person, my family won’t ever be the same. Whatever we thought we had, it won’t ever be the same.

There has to be some kind of accountability with guns; gun laws need to have some reform. I stand up for every American’s Second Amendment right to bear arms. But if someone is going through legal channels to obtain a gun, they should be required to complete all the steps in order to purchase a gun. In [Roof’s] situation, the background check ultimately was not completed, but the gun dealer still had the legal right to sell this gun due to a loophole in the law, and then that gun was used to kill nine people.

I’m always going to come from a religious context, but when I started getting involved with gun reform, I thought to myself, “God has put me in Texas, one of the craziest states with their gun laws, to fight against guns.” How crazy is that? That I’m here, trying to get things to change in a state that is bound and determined to have guns as an everyday part of people’s lives without any, I feel, moral accountability. Just look at the new open carry and campus carry laws. The UT campus system is allowing college kids to have guns! I mean, they’re trying to arm teachers. I just don’t understand this.

I jumped on the Everytown for Gun Safety [a gun-control advocacy group] bandwagon after Lucy McBath, the national spokesperson for one of their campaigns, sent me a handwritten letter. Lucy is the mother of Jordan Davis, who was killed in Jacksonville, Florida, by a white man who thought the music in the car he was riding in was playing too loudly. I felt compelled that somebody would reach out to me that way, so I called her, and from that conversation, I knew that this group was one I needed to be a part of. This group, along with Moms Demand Action for Gun Sense in America, has become my support network. Those have been the people that I know that I can call anytime because they know exactly how I feel—someone has been taken from them the same way, unnaturally, so everything that you feel, they already know. Everybody’s circumstances might be different, but the feelings and the grief and the pain are the same, and by talking to them, you start to realize that you ain’t the only one.

The next thing I knew, they were flying me out to D.C. to go to a rally on Capitol Hill and booking me for an interview with CNN. Now I’ve made six trips to D.C. and New York for this work. I kind of knew that I had the power to reach people on a small level, because in ministry that’s what you do, and because I’m a chaplain, I know the impact that my work has had on people. And that’s why it is so important to me, because you have an impact when you’re dealing with people in some of the most difficult times they’re ever going to have. The kind of care that they get from a chaplain will set the tone for their whole experience.

This fight about guns sometimes seems overwhelming and daunting. And you say to yourself, just like other people are saying to you, “You’re not going to change anything.” But I beg to differ, because I feel like one less gun on the street means one less person has to die.

So if there are positive things that have come out of this—even though Momma and my cousins and everybody else died—good things are going to come. Just like what they say in the Bible, what you meant for evil, God meant for good. —As told to Sonia Smith