If it’s possible to have a nexus between firearms phobia and gun nuttery, this week’s anxiety over the public release of plans for 3D printable firearms developed by Austin’s Cody Wilson is that intersection.

Eight states this week received an injunction to prevent Wilson’s company—Defense Distributed—from releasing plans today for making an AR-15 without serial numbers by using a 3D printer. As of this morning, Wilson’s website Defcad.com dramatically declared: “This site, after legally committing its files to the public domain through a license from the U.S. Department of State, has been ordered shut down by a federal judge in the Western District of Washington.” (Wilson’s wording was in all caps.)

On the one side, it is OMG, he’s going to release the plans to allow anyone with access to an $8,000 3D printer to manufacture a gun out of plastic. There would be no regulation of gun sales to criminals or domestic abusers. On the other hand, the libertarian Wilson has said that publicly releasing the data code for the printer will make gun control obsolete forever—no longer will the government be able to know who owns what guns.

There’s a certain amount of truth on both sides, but here’s the secret: the 3D plastic guns are not necessarily durable, and they can break easily. And Wilson’s company already is selling the means of making something called Ghost Guns out of aluminum for less than $3,000 for the first gun—and far less for each gun after that.

On a website called ghostgunner.net, Wilson’s company sells the Ghost Gunner 2 manufacturing machine for $2,000; basic firearm parts for $67 to $120 each; and a thumb drive that contains the controversial software for $10. All the federal court order did was prevent Wilson from posting the software on the internet. Because the receivers and frames, as the gun parts are called, are only 80 percent complete, they are not regulated. The other parts also can be purchased without having to go through the federal background checks. The DIYer can legally convert the 80 percent-complete firing mechanism into the working part of a gun without a serial number, which is why it is called a Ghost Gun. They just can’t sell the weapon or give it away once complete.

A homemade, one-shot zip gun can be manufactured for less than $30 with pipe parts from the local home improvement store. Zip guns are illegal in Texas. That doesn’t stop the posting of plans on how to build them from being all over the internet. A zip gun is a complete, smooth-bore weapon without rifling to make the bullet spin for increased accuracy.

What’s lost in the public debate on Wilson’s Ghost Gun 3D printer software is that the process does not create a complete gun. Whether a receiver is created by a 3D printer or on the lathe of the Ghost Gunner 2, all the user gets is the receiver. The receiver is the part that will hold the trigger and the spring and the extractor mechanism. The at-home gunsmith still would need to purchase barrels and slides and stocks to have a working firearm. A couple of years ago, Wired did a very good look at making a Ghost Gun to show how even someone with limited skills could manufacture a weapon.

I’ve been trying to reach Wilson for several days to no avail.  But Wilson last year discussed his system and lawsuit at length with The Truth About Guns.

Wilson notes that the expense would keep your common criminal from making a homemade gun. But for some evildoers, this might be an easy way of creating an arsenal on the cheap without serial numbers. And for the anti-government gunners who do not want the government to know what firearms they own, there is already no federal firearm database and the records at the Alcohol, Tobacco and Firearms offices are almost unusable.

Texas Monthly first introduced you to Wilson back in 2013 when the second-year law student at the University of Texas announced that he planned to use a 3D printer to create a pistol. “The goal is really a different kind of world, where the question of gun control is really off the table,” Wilson said. “The powerful will just have to accept that they will live in a world where everyone has access to firearms. It’s about giving it to as many people who are interested as possible and harnessing that wiki ethic.” 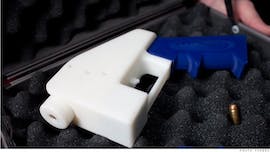 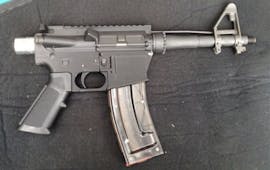 Print Your Own Gun?