Editor’s note: This post has been updated to include the secret “1905 Room” that H-E-B asked us to keep under wraps until the employees discovered it.

In February 2018, H-E-B acquired Austin-based food delivery startup Favor. Since then, both companies have grown in exactly the way that COO Martin Otto told Texas Monthly he hoped they would: Favor has grown from a little over 100 employees to nearly 350, while H-E-B has seen its delivery and curbside pickup services flourish. As H-E-B reinvents itself to operate more like a tech company, it’s moving both Favor and many of its own digital employees into a new space in East Austin on Monday. Favor CEO Jag Bath, who also took on the role of H-E-B chief digital officer after the acquisition, says that the innovative office will allow the two teams to both collaborate more closely and remain separate. “The space has a side for Favor and a side for H-E-B, because the teams are working on different things,” he says. “They are stand-alone brands that, when they need to come together, they come together. And the connection in the space is the Texas heritage.”

From the art on the walls to the actual layout of the floor space, Texas looms large in the design of the new East Austin Tech Hub, which will house 400 employees when it opens and is expected to accommodate more than 650 soon. But alongside the nods to heritage, the space also provides all the amenities you’d expect from a tech company—a fact that Bath hopes will help him recruit and retain top talent.  Part of operating as a tech company is the ability to act quickly and nimbly. To that end, the East Austin Tech Hub came together with lightning speed—Manuel Navarro of IA Interior Architects, who designed the space, was initially approached about the project in mid-June 2018. Just over a year later, the project had been conceived, designed, constructed, and furnished. Here are some of the key features:

The space is wide open, with a walkway heading north and south through the center of the building. On the west side of the office, Favor’s team will work out of a giant, open area with rows of desks without so much as a cubicle divider; on the east side, H-E-B’s digital team will do the same, in a space designed, Navarro says, to conjure the flat, open space of East Texas. 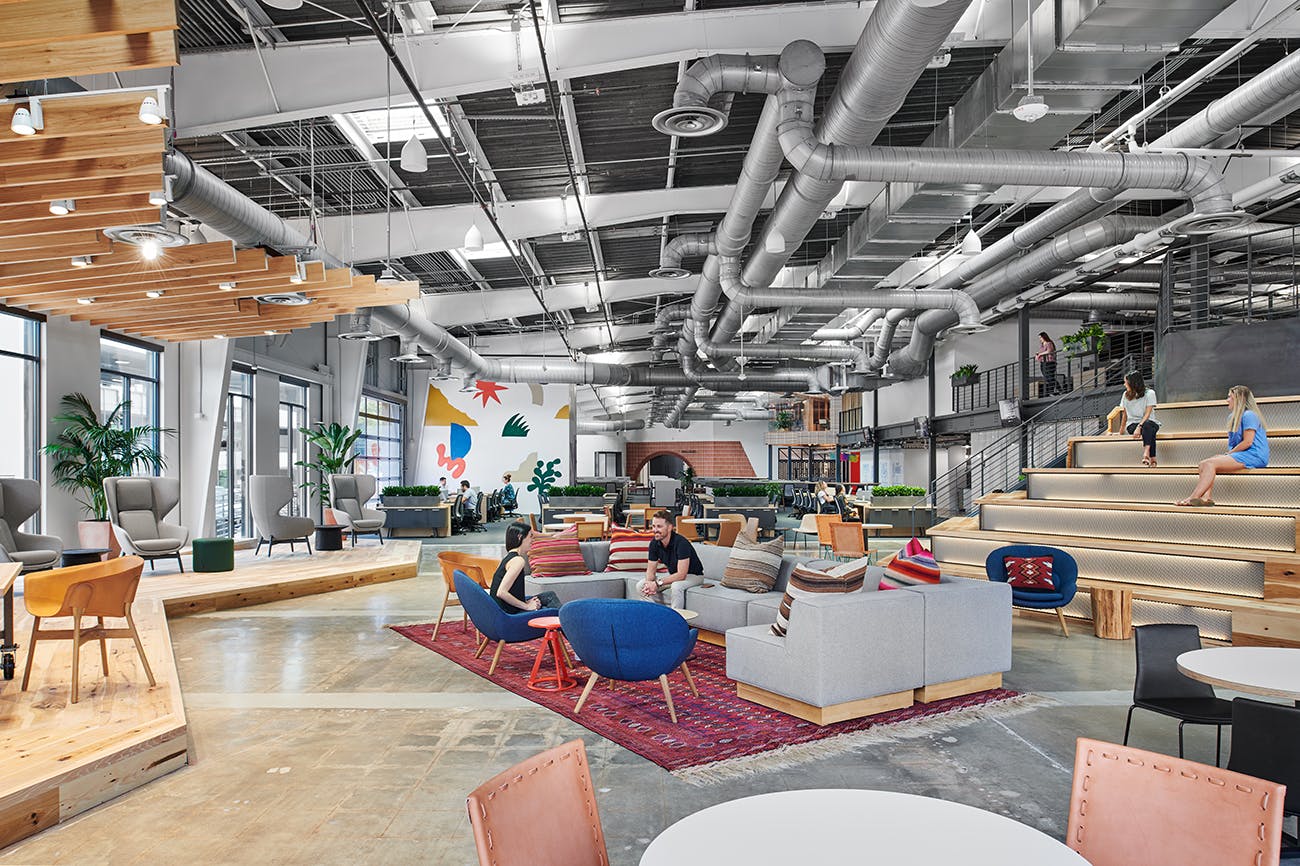 A Layout Inspired by Texas

The flat stretches of East Texas aren’t the only part of the state to get adapted to the office space. The southwest end of the building is intended to recall the mountains of West Texas—an amphitheater space (complete with garage doors that open to E. 6th Street, for public events) at the building’s corner includes stacked, stadium-style seating on a fixture that, if you squint, looks a bit mountainous. The southeast side features light fixtures that resemble what you might find on a boardwalk on the Gulf Coast in the office’s “living room” area. The northwest side, meanwhile, features a photo studio for product photography that’s built to resemble a Panhandle grain silo. (Somewhat incongruously, the Panhandle area also gets a rock climbing wall in the company gym.) 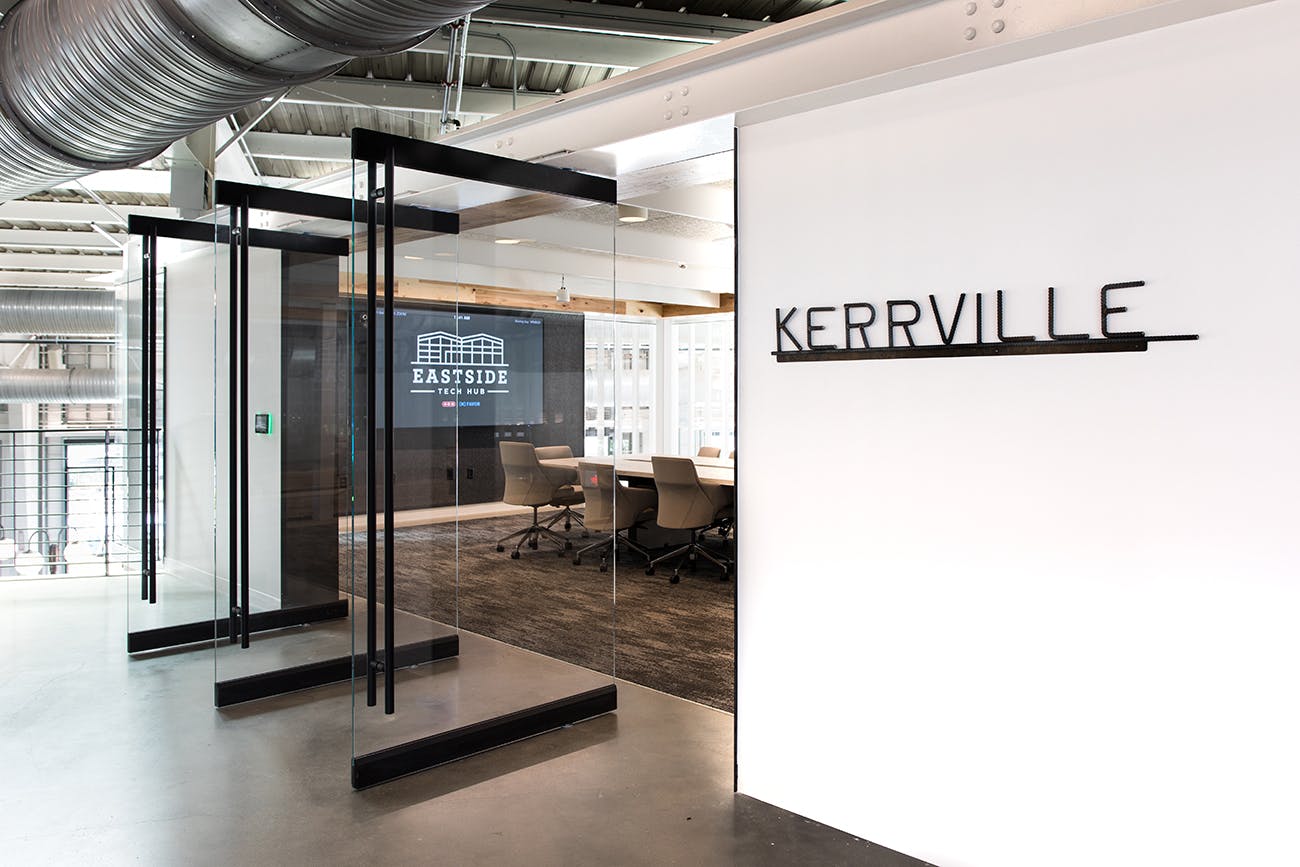 The second floor “Kerrville” conference room, at 750 square feet, isn’t just another space named after a Texas city. Every conference room bears either the name of a Texas town or natural landmark; an H-E-B house product (“I’ll meet you in ten minutes in Creamy Creations” is a thing someone might say); or a famous assistant from pop culture (Favor seems to consider Batman’s butler Alfred a spiritual antecedent to the company’s mission). But Kerrville is unique—the space is designed to recall Kerrville’s original C.C. Butt Grocery Store from 1905, with the same dimensions and some visual markers (including a nod to the four posts that supported the original structures) that take the company back to its very first days. 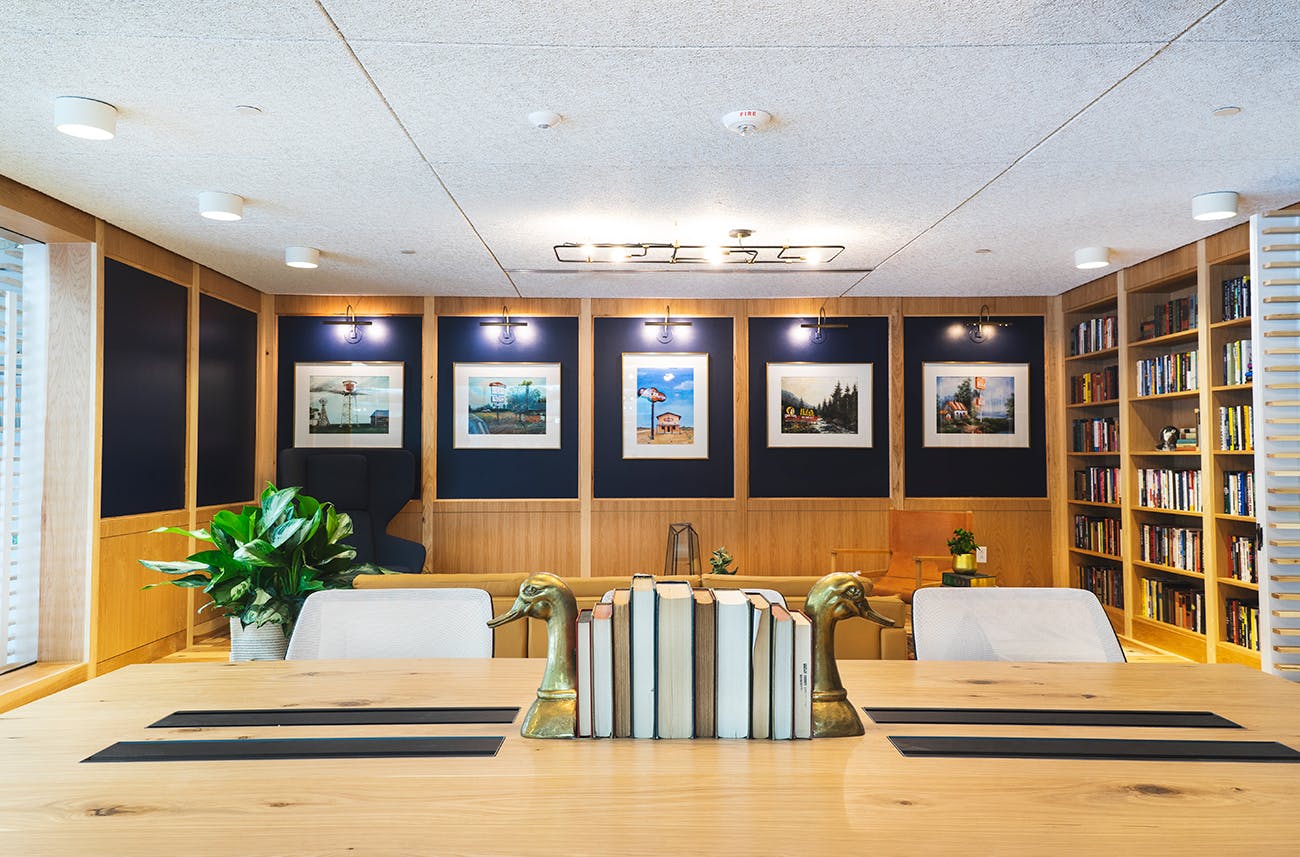 A Whole Lot of Texas Art and Design Elements

Austin artist Will Bryant painted a mural that features abstract images that conjure Texas in different ways; Marfa’s Cody Barber brought metalwork to the building’s outdoor “front porch” tables and chairs; Austin’s Ellen Bruxvoort created rope art with a nautical theme to summon the spirit of the Gulf Coast on each side of the office; the work of San Antonio painter Michael Esparza, whose idyllic vision of famous Texas chains has been covered by Texas Monthly before, is on display in the “library” section of the office (a soundproofed workspace for those who need to get away from the bustle of the open plan), while the artist is at work on a new piece featuring an H-E-B store almost certainly nestled away in a pastoral location. The details of the spaces are well-curated, too—Bryant’s mural, which appears on a wall in front of an electrical closet, features a whimsical warning sign, handpainted by Austin signmaker Joe Swec; the entrance to the library includes a neon “fireplace” by Austin artist R.F. Alvarez, to properly set the mood.

It’s not just art, either. The various design elements in the space were curated from a number of Texas artisans. The “living room” space features furniture from Garza Marfa; the signage in and outside the building comes from Austin’s BIG; the brick and tile throughout the space comes from D’Hanis Brick & Tile from San Antonio; the hammocks on the exterior porches come from Austin-based Kammok, which is located just a few blocks away from the office. 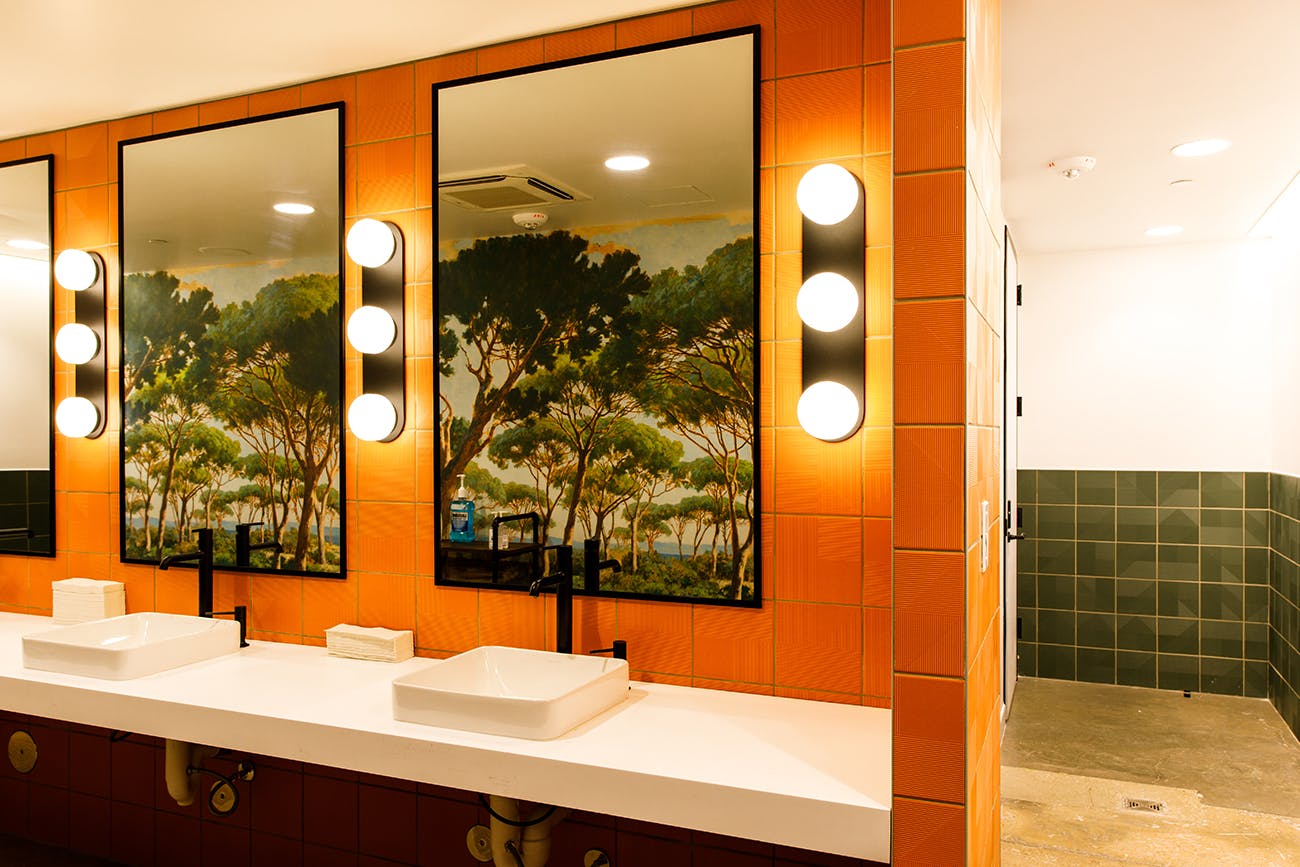 I mean, sure? Why not. The bathrooms are all themed to Wes Anderson movies—Bottle Rocket, Rushmore, The Royal Tenenbaums, Moonrise Kingdom, and The Grand Budapest Hotel all get represented in the spaces where employees go to relieve themselves, just for some added whimsy. 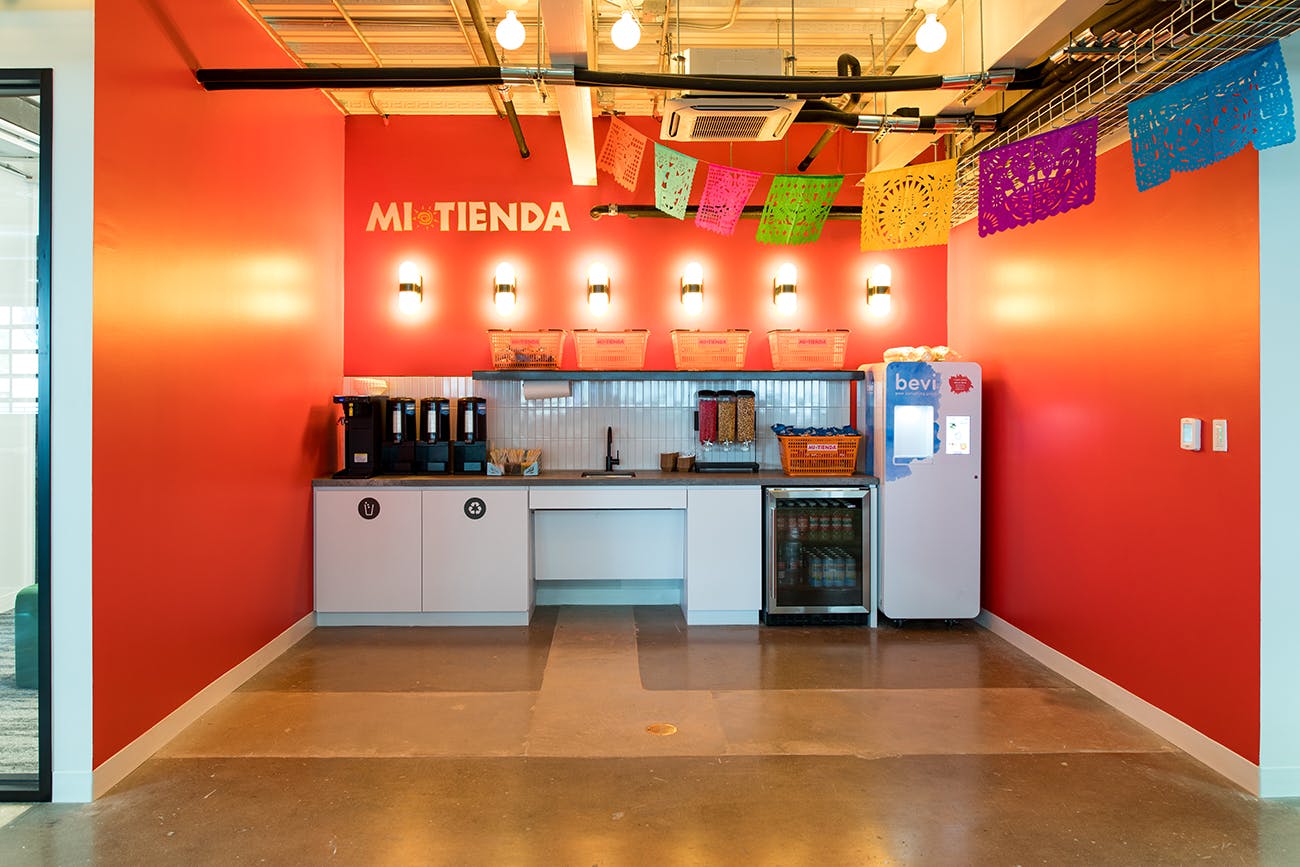 A Half Dozen “Pit Stops,” Themed After Various H-E-B Stores

H-E-B and Central Market are the marquee brands for the company, but in Houston, H-E-B also operates Joe V’s and Mi Tienda supermarkets. All four make an appearance in the office as “pit stops,” or break rooms with snacks, coffee, sparkling water fountains, and various treats that are on-theme for the brand the “pit stop” is named for—organic granola bars at the Central Market space, Mexican Cokes for the Mi Tienda spot. Additionally, there’s a larger break room with more options on the first floor, with a kitchen packed full of snacks in H-E-B curbside delivery carts. 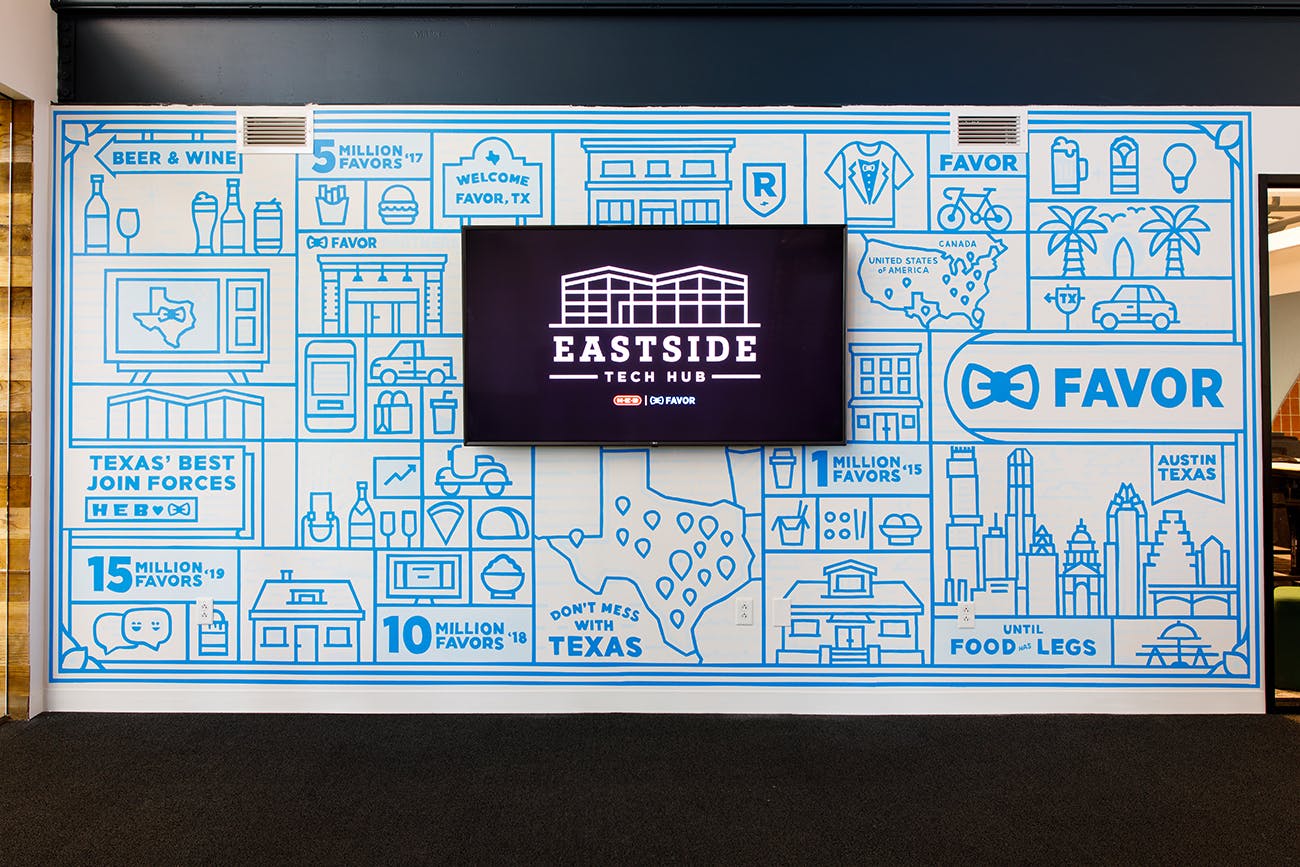 A Nod to the Two Companies’ Respective Pasts—and Shared Future

Favor has long had a visual depiction of the company’s six-year history in its headquarters, created by company art director Chris Rogge. Walking through the center strip of the space, about halfway down, you’ll spot that piece on the wall of a west-side conference room. Glance in the opposite direction, and you’ll get a piece commissioned by H-E-B by Austin designer Nathan Walker that traces the 110-year history of the supermarket chain. The H-E-B piece moves from left to right, while the Favor piece tells its history from right to left—meaning that the two histories meet right there in the middle.

Push the right panel on a wall near the entrance to the building and you’ll get a chance to see one other piece of H-E-B history re-created inside the office space: a replica of the original C.C. Butt Grocery Store that launched the company in Kerrville back in 1905. The vintage setup is a clever novelty that the company waited for employees to discover on their own, by stumbling upon the hidden entrance. 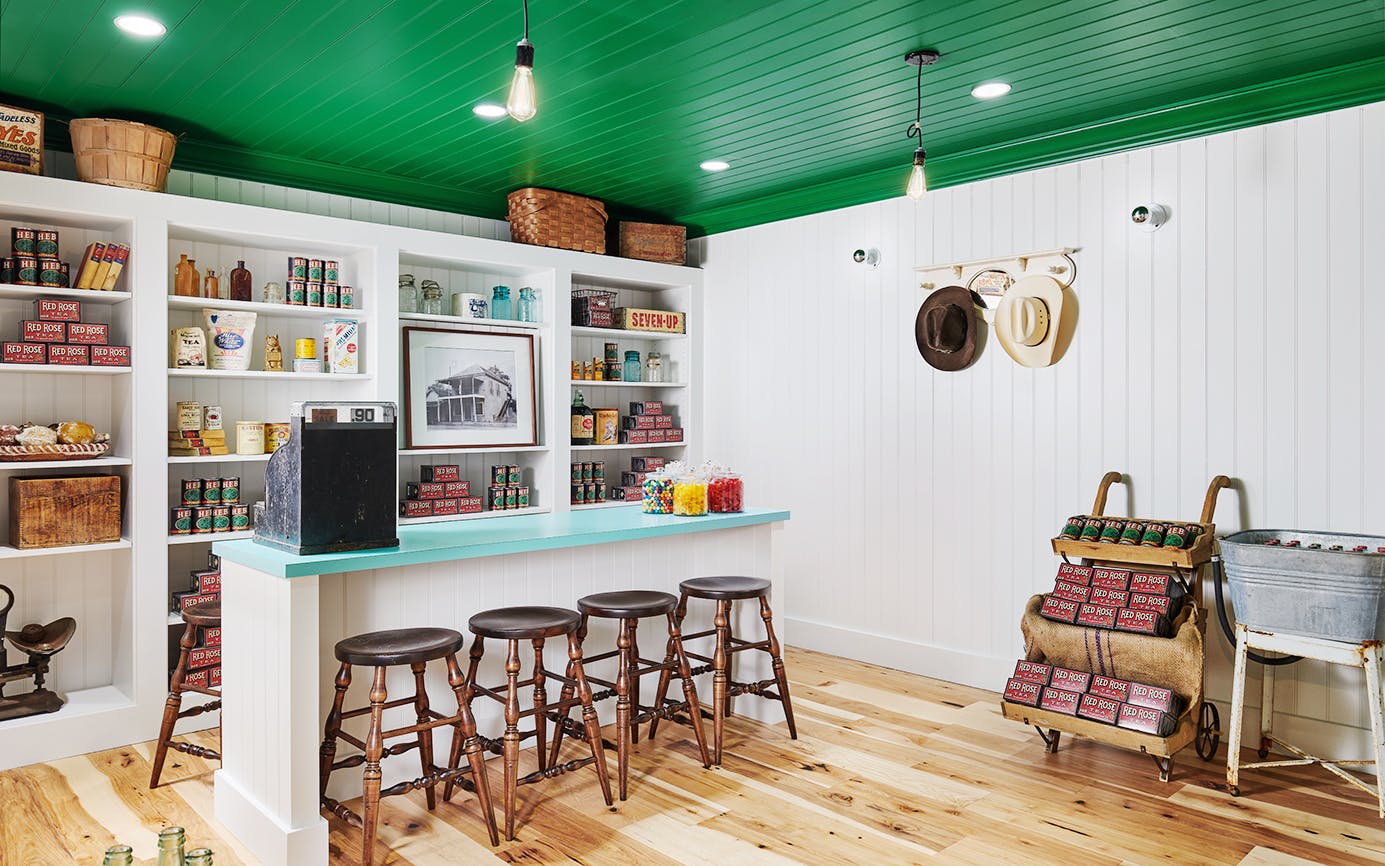