A depressing and predictable series of events seems to follow mass shootings like the one that took ten lives Friday at Santa Fe High School. First, we learn that an unspeakable act has occurred in a place where we imagine we, or someone we love, could have been—a church, a movie theater, a shopping mall, a dance club, or, in this case, a school. Then we begin seeing the killer’s picture on our smartphones, tablets, laptops, and televisions, along with images of the stunned and tearful survivors. Next come the calls to strengthen America’s gun control laws, as people convince themselves that the latest incident is the one that will finally bring change.  Our legislators tweet their sympathy while doing little else. And amidst the furor, those who own guns, roughly a third of the U.S. population, quietly go out and buy more ammunition, if not another gun.

To understand why, after decades of massacres, there aren’t stricter gun laws in this country, one has to understand gun culture. And nowhere is gun culture more evident than in Texas. Guns here, as in many parts of the country, aren’t just about self-defense. They’re also about history, identity, and community. Experts say that ignoring, dismissing, or denigrating that fact is what dooms any discussion of gun control.

The fight for Texas’s independence, like the fight for American independence, was a plucky pushback against government overreach. Back in 1835, the dictatorial ruler of Mexico dispatched troops to seize a small cannon from settlers in Gonzales, Texas. The settlers, who had been using the cannon to fend off Comanches, then turned it on the Mexican soldiers. And to make their feelings as clear as an extended middle finger, they raised a homemade flag with a picture of the cannon on it and the words “Come and Take It.”

Today, some 183 years later, it’s hard to drive anywhere in Texas without seeing a “Come and Take It” bumper sticker. Only, instead of the words paired with a cannon, you’re more likely to see the silhouette of an AR-15, which is America’s most popular gun—and, notably, the weapon used during the mass shootings in Newtown, Las Vegas, Orlando, Sutherland Springs, and Parkland. (Friday, Governor Greg Abbott stated that initial reports that an AR-15 was used at Santa Fe were erroneous—a shotgun and a revolver were used.)

The ubiquity of that bumper sticker is a not-so-subtle reminder of how Texans feel about the right to bear arms.  And the sentiment cuts across class, gender, and race lines. Whether it’s a beat-up pickup truck in Gonzales or an Aston Martin in Dallas, one would be wise to assume the driver has a gun in the glove box, if not holstered at the hip.

Which is why horrifying mass shootings—even those uncomfortably close to home, such as those in Fort Hood, Dallas, Sutherland Springs, and now Santa Fe—don’t dent Texans’ resolve to keep their proverbial cannons. Particularly when the incident seems to confirm the belief, dating back at least as far as the Texas Revolution, that the only thing that stops a bad guy with a gun is a good guy with a gun. Recall that a resident of Sutherland Springs chased down the assailant while firing multiple rounds from his own AR-15.

“This notion of cultural competence, of being cognizant and sensitive to cultural differences, is something that we typically talk about in terms of race, ethnicity, gender identity, and religion,” says Daniel Webster, the director of the Center for Gun Policy and Research, at Johns Hopkins University. “But one of the starkest cultural competence problems we have in this country has to do with guns.”

Webster says that many gun control advocates claim the moral high ground while calling gun owners “redneck idiots.” They question gun owners’ intelligence for ignoring gun violence research but fail to note that, despite the terrible number of mass shootings in recent years, homicides and other violent crimes have actually decreased significantly nationwide over the past 25 years, even during periods when gun sales have spiked, as routinely happens following mass shootings.

The interpretation of gun violence statistics—what is or isn’t “fake news”—seems to depend on whether you’ve ever used a pistol to shoot a rattlesnake menacing a family pet or scared off a trespasser just by standing on the porch holding a shotgun (perhaps pumping the forestock to show you mean business).

“One common denominator in all these mass shootings is the shooter was in complete and total control to selectively and casually put bullets in the heads of cowering people,” says Jerry Patterson, a former Marine, Texas state senator, and land commissioner, who pushed through the state’s concealed carry law in 1995, which was signed by then governor George W. Bush. “The first time someone returns fire, the shooter is no longer in complete and total control.”

In Texas, as elsewhere in the country, there are gun owners who identify as redneck and play up the stereotype that their opponents deride. But gun owners are also in the highest echelons of government and industry. They carry pistols in their briefcases and go on hunting trips together to forge alliances and strike deals. Indeed, hunting camps and leases are often equipped with airstrips to accommodate private jets.

“It’s a ritual of having a couple of drinks and cooking supper and getting up early in the morning to go sit in a deer blind or walk the hills and hunt for birds,” says the prominent Houston attorney Dick DeGuerin.

Those who study gun culture say it’s not only attitudes and beliefs that drive gun ownership; it’s also activities and communities, which give gun owners a sense of identity, connectedness, and meaning. Harel Shapira, an assistant professor of sociology at the University of Texas at Austin, says that during his three years embedded with gun enthusiasts in Central Texas, he’s learned it’s a mistake to harbor the liberal East Coast condescension that people in states like Texas who carry firearms are those “crazy people down there.” It’s a belief he himself held prior to conducting his research. “Gun culture is not just a Texas story, it’s an American story,” he says. “Until we understand and appreciate that and start consensus-building, people are just going to get further entrenched into their identities.”

Hunting and plinking at cans are recalled fondly by many in Texas as bonding activities with their parents. Guns are heirlooms passed down through generations and are used to hunt the Thanksgiving turkey and Christmas goose. Moreover, millions nationwide participate in tactical or sharpshooting competitions and belong to gun clubs that are the focal points of their social lives. Those enmeshed in gun culture take pride in their safety-mindedness and technical skills as well as their ability to protect themselves and their families if necessary.

“I put up in my garage the target that I got while training to get my concealed handgun license,” says Gerry Brown of New Braunfels, a sixty-year-old grandmother of ten and accompanist for a local high school choir. “So if anyone tries to break in, they’re going to go, ‘Oops, wrong garage.’ ”

She, like virtually everyone, is appalled by mass shootings and was devastated by what happened in Sutherland Springs, not far from where she lives, as well as in Santa Fe, not far from where her daughter lives. And yet she says such incidents only stiffen her Come And Take It stance, particularly regarding calls to ban or confiscate certain kinds of weapons or gun accessories. “Try that in Texas,” she says. “It won’t work.”

All this has Jerry Patterson, the gun rights advocate and former elected official, surprisingly in agreement with Daniel Webster, the gun control advocate. “We’ve have gotten too invested in our clichés,” says Patterson. “There are things we can do if both sides can just come to the table with an open mind and be willing to accept the validity of the other person’s point of view.”

Points where both sides can possibly find agreement:

Garen Wintemute, an ER physician and director of the Violence Prevention Research Program, at the University of California–Davis, who has spent almost $2 million of his own money studying gun violence, says that what opponents and proponents of gun control share, whether in Texas or elsewhere, is that they don’t want innocent people hurt. “We can start the discussion there,” he says.

Kate Murphy is a journalist in Houston who has written for the New York Times, the Economist, and Agence France-Presse. 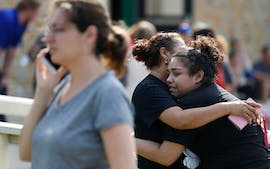