About four miles west of the road that runs into Nuevo Progreso, Mexico—a hugely popular destination for retirees visiting South Texas—just south of Military Highway, are the seventeen graves that comprise the Balli Cemetery, the last vestige of what was once a seven-thousand-acre cattle ranch granted by the Spanish crown in 1790. A thousand yards to the north of this historic site, roughly a dozen construction workers are busily stripping away all plant life, including what was a thick copse of trees, to level a swath of land a mile long and 150-foot wide as the first step in building the Trump administration’s long-sought border wall.

Similar construction activity is underway this week about thirty miles west, in Mission, on the other end of Hidalgo County. Instead of despair, there’s growing anger among some of the wall’s harshest critics, who claim this reduction of acres of verdant land down to dirt is all just for show ahead of next year’s presidential election.

“It’s striking that CBP [Customs and Border Protection] is again jumping the gun and announcing construction and the awarding of contracts for a project that will be on land they don’t even own,” said Scott Nicol, co-chair of the Sierra Club Borderlands Campaign. “They’re starting construction just to say that they’ve started construction. It’s a political gimmick that is designed to create billboards for Trump in 2020.”

When I asked CBP officials this week about the heavy construction equipment and activity I’d observed along the federally owned earthen levee that runs about a mile north of the Rio Grande, they acknowledged the work had begun September 30 in preparation for the construction of about thirteen miles of border wall. The clear-cutting of a 150-foot “enforcement zone” on the south side of the planned 30-foot wall is designed to accommodate all-weather roads for Border Patrol vehicles, lighting, cameras, and the deployment of other related technology.

If a wall ultimately is completed at this location, it would mark the completion of the first stretch of new border wall anywhere in the country during the Trump administration. As of the end of August, sixty miles of replacement wall had been built along dilapidated sections of the existing 654 miles of wall built by the George W. Bush administration, but not a single mile of new wall has been completed under Trump’s tenure. A total of 65 miles of new wall is planned and funded, at a cost that will run somewhere between nearly $400 million and $800 million, through the Rio Grande Valley.

Stepping up on the earthen levee that overlooks the activity this week, the first thing I noticed, just across a narrow dirt road where construction was happening, was an existing stretch of 18-foot-high border wall that extends westward atop the levee and borders Las Palomas Wildlife Management Area, three-thousand acres of state-protected nesting habitats and wetlands for white-winged doves. I was soon approached by a man in a pickup wearing a hardhat and safety vest. In the most cordial manner, he told me that I was trespassing. When I asked what was going on, he directed me to call CBP. The same man had threatened another reporter with arrest just minutes earlier.

It remains an open question whether all the work this guy and his crew are doing will prove to be for naught. Since 2017, various polls have shown that between 55 percent and 60 percent of Americans oppose the building of a border wall. Congress has already been forced by popular sentiment to carve out exceptions to forbid construction through more environmentally sensitive sections of South Texas, including the Santa Ana Wildlife Refuge; the National Butterfly Center; and Bentsen-Rio Grande Valley State Park.

Most importantly, most of the area through which CBP is looking to build the wall is private land. Texans are fiercely protective of their property. More than eighty eminent domain cases are still being litigated, for example, from the Bush administration’s 2008 effort to build a border wall. Nicol believes landowners are no less likely to avoid a court fight in this case. One Starr County official told me she expects virtually all of the private landowners in her county to battle eminent domain proceedings.

Early estimates suggest that it would cost taxpayers more than $24 million to build each mile of wall that is planned. Nicol claims that figure will only rise as long as federal officials insist on starting construction for a mile or two of wall, then stopping construction until court cases are resolved, as he expects to be the case with this latest preparation work. “The most efficient way for contractors to build is to go in with equipment and supplies and do it all at once,” he sad. “Right now, the federal government is clearing out space for an enforcement zone. Who knows when they can start construction. If they end up building this little piece of wall this way, that’s one way to ensure it drives up the cost.” 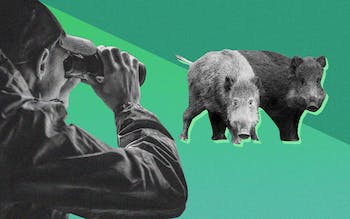