In a grey-toned conference room in the Capitol extension on Thursday, a woman handed the mic to Kyle Chandler, an actor who is instantly recognizable as Coach Taylor from the TV series Friday Night Lights.

But in this case, Chandler quickly ceded the spotlight to two fifth-grade* girls: his daughter, Sawyer Chandler, and her friend, Sam Matthews.

The trio were in the conference room, which had been reserved for the day by the national chapter of the Humane Society to promote a bill that would make the trade, sale, and possession of shark fins illegal in the state of Texas. Gathered with them were a number of volunteers from the organization. It was the humane society’s day to lobby the legislature, and later in the day, the volunteers would swarm the capital in teams, meeting with individual legislators in an effort to promote various animal welfare bills.

The subject at hand was the welfare of sharks.

“I’ll give you moral support,” said Chandler, as he introduced the girls to the group. He explained that they both want to be marine biologists when they grow up.

“I don’t like speaking in front of large groups,” Sawyer said as she took the podium.

Her friend, Sam, apparently felt the same, but was resigned: “I really like sharks, so I guess I’ll do it.” 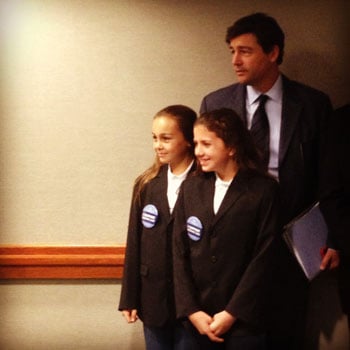 Nerves aside, the girls delivered a moving speech about the horrors of sharkfinning, a practice in which fishermen cut the fins off of sharks and dump the creatures back into the ocean to die. Though the practice is banned in the US, there is still a market for the fins; sharkfin soup is a delicacy in China. The girls were asking legislators to take things a step further and pass a bill by Larry Taylor, a Republican senator from Friendswood (and no relation to Coach Taylor), which would ban the possession, trade, and sale of sharkfins.

Sawyer said that she first became aware of the problem when she watched Sharkwater, a 2006 documentary by director Rob Stewart. “It has a lot of blood,” she said. “But it was very educational.”

Both Sam and Sawyer said they knew that something had to be done.

“We both liked sharks for a really long time and then once we knew what sharkfinning was…” Sawyer began.

“We thought it was really barbaric,” Sam concluded.

“And we wanted to learn how to stop it. And we realized that even though we’re this young, we could,” Sawyer said.

Sawyer created a website, which her father mentioned when he made an appearance on the Ellen show. The Humane Society of the United States saw the interview and contacted Chandler to see if Sawyer would like to speak at the lobby day.

So far, as part of the lobbying effort, Sawyer has met with her hometown legislator, “Mr Isaac,”—that is, Jason Isaac, a Republican representative from Dripping Springs—and Representative Eddie Lucio III, a Democrat from Brownsville, who authored the Senate bill’s House companion. And, as her father helpfully reminded her, she has a meeting with Governor Rick Perry next week.

The girls, who wore matching jeans, sneakers, polo shirts and dark blazers (the sneakers had different-colored soles, for good measure) hope to take their effort to other states. “We plan to go to Louisiana, because we know that’s not a state that has banned it,” Sawyer said.

As for Sawyer’s father, it was clear that Chandler’s passion is less for sharks than for supporting his daughter. He spoke up rarely, mostly to explain state government to the girls or to offer an informational flyer, by Sawyer, which featured a few facts and more than a few exclamation points. At one point, he told Sawyer and Sam that the bill being bipartisan meant that it was “even better, because both Democrats and Republicans support it.”

Both the Senate and the House versions of Taylor’s bill were left pending in committee after public testimony earlier this month.

In the interim, both Sawyer and Sam said they were happy to have found a friend in each other.

“It’s been very helpful that we both like sharks,” Sam explained.

“We learn things from each other,” Sawyer added. “I just learned a fact from her about why sharks are important.”

*A previous version of this story misstated the grade level of Sawyer Chandler and Sam Matthews. They are fifth graders, not seventh graders. We regret the error.