Is that gurgling sound you hear the death rattle of Ron Paul’s campaign? A string of bad news for the Texas libertarian is pointing to yes.

Last week, Politico‘s Dylan Byers noted that Paul, that “lonely delegate hunter,” lost his sole full-time embedded reporter when NBC News pulled Anthony Terrell off the trail. “Ron Paul is officially embedless,” he wrote. Paul has just 50 delegates, according to the Wall Street Journal‘s latest tally, and has yet to win a single state. This led Mediaite‘s James Crugnale to quip, “Like the Yangtze River Dolphin, embedded Ron Paul reporters are going extinct.”

Paul’s campaign is also hemorrhaging cash. According to the latest campaign finance filings, Paul had only $1.37 million on hand at the end of February, an amount Politico‘s Dave Levinthal dubbed “a pittance for a political campaign competing nationally.” The campaign spent $3.55 million in February and only raised $3.27 million.

To put this in perspective, Slate‘s David Weigel pointed out that Paul had $1.6 million on hand at the end of January, compared to the cool $6 million left in his account at the end of January 2008. “2012 isn’t 2008,” Weigel wrote. “2012 is an old-fashioned slog. The caucuses are over; expensive primaries in New York and California are coming next month and in two months. And Paul’s ability to spin gold out of straw has faded, as he’s proven unable to pip Romney or Santorum in the caucuses — Maine, North Dakota, Hawaii — that supporters thought he could win.”

The Christian Science Monitor‘s Peter Grier was of the mind, however, that Paul still has enough cash to coast to the GOP convention in August. After all, “the Paul campaign is leaner than your average presidential bid,” Grier wrote.

But, was Ron Paul ever really out to win the presidency? While Brian Montopoli of CBS News agreed that by that metric, Paul’s campaign is a “failure,” but he’s had his eye on another prize the whole time: “As Paul’s team will openly admit, his presidential run has doubled as an effort to advance the Libertarian movement. And on that measure, there are reasons to already view it as a success.” 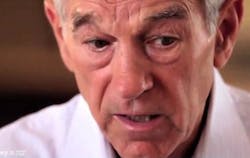