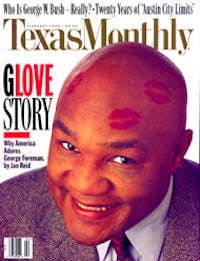 Just as a vociferous Republican revolution is under way in Washington, a quiet one is taking place in Texas. Even before he took office on January 17, George W. Bush made it clear that he intended to redefine the role of governor. The Texas constitution of 1876, written in the twilight of Reconstruction, established a weak chief executive and a strong legislature, and that imbalance of power has prevailed for more than a century. But if Bush had his way, he will be more involved in the major issues of the state—especially the budget, traditionally the near-exclusive province of the Legislature—than any governor since the reviled scalawag E.J. Davis fled from office in 1874.

Bush’s opportunity to expand the power of his office comes from a unique combination of three sources: party, promises, and personnel. The Republican Party, while still a minority in the Legislature, has established new high-water marks in both the House (61 out of 150 members) and the Senate (14 of 31). Moreover, Republicans are far more united than their Democratic counterparts. The promises Bush made in his issue-oriented campaign, and his surprising 350,000 vote margin, give him the clout to make changes in the four areas he stressed: education, welfare, crime, and tort litigation.

As for personnel, Bush—unlike most of his predecessors—will be able to take control of key state agencies near the beginning of his term. In the past, governors have had to wait until their third year in office before they could appoint a majority to the boards that oversee the agencies. But the Legislature passed new laws to allow Ann Richards to wrest control of the bureaucracy from appointees of departing GOP governor Bill Clements, and Bush has been able to use those same laws to oust Richards’ appointees.

The climate is right for Bush to succeed. There is no competing agenda. For the first time in more than a decade, the state has enough money in the treasury that the Legislature won’t have to resort to new taxes or other desperate measures. Education reform, Bush’s top priority, is already on the table because the 1993 Legislature decided to phase out most school laws after this year. Here is what Bush wants to do—and what is likely to happen.

Bush has compared education in state government to defense in the national government: the number one responsibility. Unfortunately, the schools aren’t doing as well as the military in carrying out their mission. Bush’s solution is deregulation. He wants to liberate local school districts from state requirements and let them choose their own curricula, teaching methods, textbooks, classroom size, emphasis on athletics, you name it. “The regulatory burden is crushing you financially and strangling creativity with a one-size-fits-all approach to education,” Bush told educators in a campaign speech. Bush’s deregulated system would feature “home rule school districts,” which would remain free of state control as long as they met achievement standards. The theory is that each district will be innovative and design its own plan.

Maybe so. But it’s just as likely that many districts will be taken over by factions: the religious right, athletic boosters, teachers’ rights activists, tax protestors, or patronage-hungry politicos. The ideal of citizens coming together to achieve academic excellence may work in small private schools, but in public education, the majority of citizens eligible to vote in a school board election have no children in the schools. They are more often concerned with the realities of politics—emotional issues, selfish interests, or control over public money—than educational ideals.

Such concerns are the main reason why legislators are unlikely to approve wholesale deregulation of school districts. Bush hasn’t even been able to persuade a key fellow Republican, Senate Education Committee chairman Bill Ratliff of Mount Pleasant, to sign on to his program. Ratliff does not favor getting rid of the limit of 22 students per teacher in the elementary grades; the no-pass, no-play rule; and other state requirements he regards as beneficial.

Deregulation of education will be Bush’s toughest fight. The likely outcome: He will get partial deregulation—not as much as he wants, but enough to proclaim a victory.

Bush’s reform plan is similar to the welfare reform proposals in the congressional Republicans’ “Contract With America”: require able-bodied recipients to get a job or attend school; cut off benefits after two years on the dole; and limit benefits to two children per mother. Because welfare is a federal program, Bus will have to ask the Clinton administration for a waiver to institute his policies. His main legislative initiative is the Dead-beat Dads bill. It tackles a small part of the welfare problem—fathers who won’t take responsibility for their children. The idea is to cancel all state licenses for parents who are behind on their child-support payments: no driver’s license, no license to practice a profession, no permit to hunt or fish or carry a handgun. The bill is expected to win approval.

The traditional get-tough approach of Texas politicians has been to build more prisons and impose longer sentences. The trouble is, the longer sentences keep the prisons overcrowded (resulting in the release of violent criminals to make room for new inmates), and the new prisons cost a fortune to operate (resulting in frenzied competition among legislators to have new prisons—and jobs—located in their districts). To his credit, Bus recognized that the building program has been driven as much by pork barrel as by necessity. Now he’s looking for ways to cut it back. He wants to reopen the Ruiz prison-reform case to let some inmates be housed in tents when prisons are overcrowded and to contract with counties to house excess state prisoners.

Bush won the crime issue during the campaign by capitalizing on public fear of youth gangs. The centerpiece of his juvenile-crime program is to lower the age at which a young criminal can be charged as an adult from sixteen to fourteen. Those found guilty would be incarcerated in juvenile facilities—which, if Bush had his way, will get more capacity—until they reach eighteen.

The likely outcome: Bush will get just about everything he wants.

For most of the eighties, plaintiff’s lawyers controlled the Texas Supreme Court and the Texas Senate. Now the pendulum has swung, and business interests are bent on undoing the laws, decisions, and practices that made Texas a worldwide haven for big-dollar lawsuits. Bush has embraced the eleven-point program of Texans for Lawsuit Reform (TLR), a Houston-based group whose board of governors numbers in the hundreds and is virtually a who’s who of the Texas business and political establishment (T. Boone Pickens, Walter Mischer, Ray Hunt, Bill Hobby, Charles Duncan, and Ken Lay, to name a few).

The main targets of the tort reformers are large awards for punitive damages, forum shopping by lawyers to get their cases heard by plaintiff-oriented judges and juries, and the deep-pockets theory that requires one defendant who is only partially at fault to pay most or all of the damages in a case if he has the money but other defendants don’t. The abuses in these areas have been widely publicized, but one could make the case that the real problem isn’t Texas law—which for the most part is in the national mainstream—but Texas judges. They are supposed to make the system work by reducing outlandish awards, cracking down on forum shopping, and throwing out frivolous lawsuits. But powerful plaintiff’s lawyers are very involved in judicial elections, and many judges are either too cozy with them or too afraid of them to stand in their way.

The plaintiff’s lawyers were hoping that Democratic lieutenant governor Bob Bullock would save them. But on the second day of the session, he endorsed the TLR package. Texas is about to have a litigation revolution.

The Texas constitution has a requirement that governors submit budget information to the Legislature, but their budgets have been ignored with regularity. The chief executive’s influence has been limited to vetoing individual items, and even that power has been exercised sparingly. So why has Bush amassed what amounts to a nuclear arsenal of budget talent by raiding the Legislative Budget Board for experts? As the cold war proved, nuclear weapons are a useful deterrent. What does Bush want to deter? Answer: smoke-and-mirrors tactics that legislators use to manipulate the budget and justify more spending. Bush’s experts give him the leverage to challenge legislative estimates of the costs of programs, the savings of cuts, even the amount of revenue the state will take in. They make him a player in the budget by keeping the Legislature—and comptroller John Sharp, the front-runner to challenge Bush in 1998—honest. If the cold war precedent holds, Bush will never have to use his nukes. The threat will be enough to rein in the Legislature.

Bush’s toughest decision is whether to urge Senate Republicans to block the confirmation of Ann Richards’ appointees who have yet to be approved by the Senate. More than six hundred people are in this limbo, but only a handful are serving on the boards of major state agencies. The peril for Bush is that by busting Richards’ appointees, he will risk Democratic retaliation against his own.

One obvious target is Peggy Garner at the Texas Natural Resource Conservation Commission (TNRCC)—mainly because Bush can’t gain rapid control of the state’s main environmental agency unless he can fill her slot. But the Senate’s most powerful Democrats (including Bob Bullock) take an intense interest in the TNRCC’s actions. Pre-session maneuvering by Bush to get Garner to step down and take an appointment to a different board didn’t work out.

The Garner confirmation highlights the main obstacle between Bush and his redefinition of the governor’s office: his personal relationship with Bob Bullock. The masterful but moody lieutenant governor has made all sorts of friendly gestures so far, giving Republicans the chairmanship and majority of two committees vital to the governor’s interests, Nominations and Education. He endorsed the tort reform package. But Bullock keeps score. Now Bush owes him something. It might be the TNRCC; it might be the budget; it might be something else. But the payment will come due, and how George W. Bush decides to make it will be the greatest determinant of his ability to expand his power.