News outlets across the country devoted considerable ink (and pixels) Wednesday morning to announcing the arrival of San Antonio Mayor Julián Castro onto the national political scene. And Castro’s keynote address prompted the media to remember the last Texan to enjoy that plum speaking slot, then-state treasurer Ann Richards, who dazzled the crowd at the 1988 convention in Houston with her rousing keynote.

John Balzar of the Los Angeles Times praised her performance at the time: “Ann Richards, the syrup-voiced and silver-haired statehouse pol from Texas, pulled off a stem-winder of a keynote address rooted in family experience. She raised memories of growing up in small-town, Depression-era Texas where kids sat at night on quilts under the stars and listened to grown-ups, and where Mom put Clorox in the well when a frog fell in,” he wrote in 1988.

And Richards’ speech, packed with folksy one-liners, has held up in the 24 years since she delivered it. (Quotes you may remember from the speech include “Poor George. He can’t help it. He was born with a silver foot in his mouth” and, on the fact that she and Barbara Jordan were the only women to give the keynote in 160 years, she remarked “[I]f you give us a chance, we can perform. After all, Ginger Rogers did everything that Fred Astaire did. She just did it backwards and in high heels.”)

Richards was well aware she would be facing her largest ever audience that night, her political adviser Harrison Hickman told Wayne Slater of the Dallas Morning News, and, despite her confident exterior, she was nervous:

Here’s something few people know about the moments following Ann Richards’ famous keynote convention speech, the night she introduced “Poor George, he can’t help it …” into the political lexicon.

On stage she was the epitome of confidence and authority — a sassy, tart-tongued Texas woman in the Dairy Queen hairdo who was all splash and dazzle.

But when she stepped off and went behind the curtain where a few people were waiting, she seemed suddenly full of doubt and second-guessing.

In June 1988, a month ahead of the speech, Richards explained, using her trademark wit, how she landed the keynote: ”I have been making speeches at the Madisonville Cattlemen’s Association and the McAllen Mexican American Democrats convention, the Nacogdoches Chamber of Commerce and any number of places that you think of, and it’s kind of like, how do you get to Carnegie Hall? You just practice,” she said.

Watch Richards’s speech below or read the transcript here:

Richards, some six years after her death, has seen a “resurgence” in recent months, Slater wrote, with a a new documentary, biography, and play revisiting her life. Why all the renewed interest? Slater offered this explanation:

Maybe it’s because she seems in our rearview mirror like a rare commodity, a politician who was honest and direct and got things done as a matter of principle.

Her daughter Cecile Richards, the president of the Planned Parenthood Action Fund, will be among the speakers on the convention stage.

She said recently that the conventions always stir memories of the straight-talking Texan.

“There’s a lot of, ‘I wish your mom was around because she would say exactly what needs to be said,’” Cecile Richards said.

On the podium that night, Richards, “a progressive feminist with a Texas twang,” “metamorphosed from third-rung public official to a sought-after national figure, the toast of the Democratic Party throughout the U.S.,” Patricia Kilday Hart opined at the Houston Chronicle. Kilday Hart looked to the reaction to Richards’ speech for lessons about what the keynote could do for Castro’s polical future.

[L]ike Richards, he may parlay his speech into an enduring public role by representing a unique voice: young Hispanic elected official. We got a glimpse of that Tuesday, when Castro suggested that Mitt Romney was out of step by suggesting that young people who want to start a business should borrow capital from their parents.

Joked Castro, who was raised by a single mom: “Gee, why didn’t I think of that?”

By offering a counter­point to Republican Hispanics like Florida Sen. Marco Rubio and Texas Senate nominee Ted Cruz, Castro may earn a place on the national stage as important as the one Richards held.

That will enable him – like Cruz – to tap into national sources of campaign funds for future races. Then, when Texas swings from red to blue, Castro will be ready.

But while Castro did not mention Richards by name in his speech, he looked to both her speech and Barbara Jordan’s 1976 keynote (which he described as being the “most meaningful for the progress of the nation”) when preparing for the spotlight, he told Slater Tuesday night before taking the stage.

Earlier in the day, Castro met with Slater and described meeting Richards as she campaigned for governor:

“She was exiting the event and we were saying hi to her. She stopped and asked me my name. ‘Julian, I want you to promise me that you’re going to graduate from high school and go to college, and you’re going to make your mama proud.’ And my mama was right there, so I said of course, yeah. I was like 15.”

“I’m thinking about where Texas is today and where Texas was with Ann and the vision she had for investing in people and creating a stronger Texas by believing in education, in our universities and economic development linked. She was inspirational. And I think about the missed opportunity we’ve had in the last 20 years because she has not been in office.” 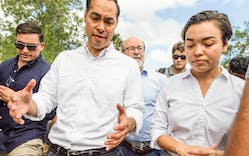