Editor’s Note: There’s nothing the media loves more than a media story, except maybe a media story with the strong whiff of abortion politics. And so it was that the firing of Houston radio talk show host Scott Braddock by News 92 in Houston became a blogosphere and Twitter cause celebre, with coverage everywhere from the Houston Chronicle and the Dallas Morning News to the Quorum Report, Raw Story and the Texas Observer.

Because Braddock’s firing occurred shortly after an interview he did about Texas’s new sonogram law for women who are considering getting an abortion, some of those outlets were to quick to see an element of censorship to Braddock’s dismissal. Strictly speaking, that did not appear to be the case, though Braddock has said the station’s current acting program director seems uncomfortable with hard-hitting topics of any kind. And the station’s rationale for the dismissal—that Braddock’s guest appearance on a non-commercial radio station, during which he re-aired a portion of the interview he did for News 92, was in violation of his contract—either seems like an overreaction or an excuse to get rid of someone that they wanted to get rid of anyway.

But what was ultimately most striking about the the aftermath of the firing is how support for Braddock, who has previously worked for KTRH in Houston Newsradio, 1080 KRLD in Dallas and CBS Radio and the Texas State Networks, came from all points on the political spectrum – something that is pretty hard to come by in Texas politics (or the media) these days. As much of the coverage noted, Braddock’s dismissal was protested not just by his colleagues and progressive bloggers, but also Texans for Life, and the Tea Party group Americans for Prosperity. All sides praised Braddock’s program as a truly open and substantive forum.

Below is Braddock’s own retelling of the past two weeks, which was originally printed yesterday on his own website. Braddock is currently looking for his next job, which may or may not mean moving to another state.

“I love radio and I love Texas,” he told the TM Daily Post. “I hope I don’t have to choose.”

I stood in my kitchen at home in Houston and tried to assure a woman who recently had an abortion that I would be fair to her if she appeared on my radio program.

As I talked to Carolyn Jones, who had called me from Austin, she was very nervous about what questions I might ask her on the air.  As has always been my policy, I didn’t give her any specific questions, but I let her know she’d get the chance to tell people about her experience with new restrictions on abortions in Texas.  She’d get a fair shake, which is all I ever promise anyone.

We did the interview on News 92 FM.  Jones didn’t come with talking points.  She didn’t come with spin.  One reason an interview like this is compelling is you can hear how the person with no broadcast experience isn’t ever quite sure how to begin their answer to a question. There’s a nervousness there that just isn’t an issue for someone like me who lives his life on the airwaves.  She wasn’t comfortable at all, but she stayed with it and told total strangers all about some of what would otherwise be some of the most private moments of her life.

Right after the interview, one of my colleagues dropped by the studio and said “Oh my God that was hard to listen to.”

“It was just too real,” they said.

You can judge for yourself whether the interview was fair.  Take a listen.

Later that day, as a favor to my friend Geoff Berg, I filled in for him on his show on community radio KPFT in Houston.  On Geoff’s show, I did what I always do: Cover the news.  Carolyn’s interview was included in my coverage of the news on Geoff’s show. After that, I was fired from News 92 FM.

When I was fired, it was surreal.  News 92 News Director Denise Bishop had the look of someone headed to a family funeral when she asked me to join her in our boss Doug Abernethy’s office. Doug is the Regional Vice President for the company in Houston.

Abernethy told me I was in breach of contract for having appeared on another radio station and for playing the Jones interview that had originally aired on News 92.  The trouble with that argument is I had not signed my contract.  I was still reviewing the paperwork and no one at Radio One (the owner of News 92) had made it a priority to get me to sign it.  The bosses also made the argument that the interview was their intellectual property, which would only even apply if I had used the interview to make a profit somewhere else.  KPFT is non-profit and I was not paid for my appearance on that station.  It was a favor for a friend.

As a journalist, I never assume I know the reason anyone does anything.  My role is to present facts and facilitate discussion.  Since the stated reason for my dismissal made no sense, many started guessing what the actual reason might be.

On Twitter and other social media, one idea started to drown out all others about why the bosses felt I should be out the door:  Abortion politics.  As one tweeter put it:   “If @scottbraddock had interviewed a MAN that was affected by an invasive government mandate, would @News92FM have fired him?” The Dallas Morning News, the Quorum Report and the Houston Chronicle also posted stories suggesting the firing could be politically motivated.

The Texas Observer asked “Why was Scott Braddock Fired?” and the national website Raw Story went with this headline: “Texas reporter fired after shocking interview on transvaginal sonograms.”

Others said that if the radio station was done with me, they were done with the station.  A twitter feed and a Facebook page were established to support me and give my former listeners information about anything they might be able to do.  I did not start those efforts.  It’s my understanding that News 92 managers have been bombarded with phone calls and emails from upset listeners for a solid week.  Some of them have been forwarded to me.  Here’s one of those emails:

I was enjoying the new 92.1 news radio station until your recent firing of Scott Braddock and how you handled it. Therefore, I will now turn off the radio station that I had grown fond of.

Just so you know my demographics: I’m white, female, age 52, professional working woman, married for 23 years and have 3 children. I am well educated and have an advanced degree. I do not know Scott Braddock, nor have I ever met him.

As I would with any issue, I’ve covered the new abortion restrictions from all sides.  I have the support of both Texans for Life and Planned Parenthood Gulf Coast.  The presidents of both groups have asked News 92 FM managers to reconsider their decision to fire me.

My future is unclear, but I’d like to get back to covering the news.  So, let’s do that.  The reporter in me wanted to know:  How does the subject of this news story feel about how things unfolded.  I emailed Carolyn Jones to ask her why she was hesitant to go on the radio in the first place:

“Writing an article about my experience was something that I had control over: I could choose the words and the tone and decide how much or how little I wanted to say. On live radio, I have less control and I can’t go back and revise my words till they’re right. To speak about something as personal and painful as abortion, one that is also a hot-button political issue, was really scary. I wasn’t sure how Scott would handle it and whether I’d find myself on live radio having to defend my choices. As it turned out, his warm and approachable style meant that the interview was less terrifying than I’d expected it to be. He let me tell my story — with no editorializing from him — and for that I’m very grateful.”

I’m grateful she was willing to be “terrified” with me live on the radio.  The terrified need a place they can share their stories.  I hope they’ll always have one. 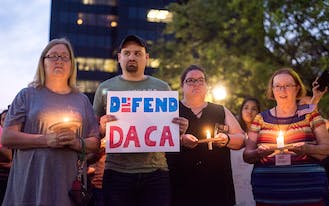