The touring show “The Intergalactic Nemesis” is an adventure story featuring robots, aliens, time travel and magical powers. But its special effects take place exclusively in the audience’s mind, created through an alchemy of old media and imagination. “Twin Infinity,” the third book in the trilogy, premiered Friday night at Austin’s Long Center for the Performing Arts. The first book, “Target Earth,” will play in Houston on Sept. 30.

An homage to the pulp fiction of the 1930s and ’40s, “Intergalactic” follows a Pulitzer Prize-winning reporter, her wide-eyed assistant and her time-traveling love interest in their quest to save the Earth from sludge monsters from the planet Zygon. Originally a serialized radio play performed in an Austin coffee shop, the show now tours as a “live action graphic novel.”

In the last four years, the first two books in the “Intergalactic” trilogy have been staged before more than 70,000 people at more than 100 venues worldwide, including the Kennedy Center in Washington and the New Victory Theater Off Broadway. The producer and director, Jason Neulander, 44, describes the show as a radio play that replaces the narration with visual images, or a comic book that replaces the dialogue balloons with live actors.

Three actors voice all the characters, each performing up to 15 roles in a single show. Next to them, on stage, a sound effects artist creates live effects with props, and a pianist plays an original score by Graham Reynolds of Austin, who composed the soundtracks for Richard Linklater’s “Before Midnight” and “Bernie.” Behind them, comic book panels projected onto a giant screen set the scene.

“I think we like the fact that all of the individual elements are a little archaic,” said Buzz Moran, 44, the show’s sound effects designer since 1996. “All of these simple elements together turn into something complex and different.”

The first iteration was a 1996 collaboration between Neulander and his friend Ray Colgan, who wanted to stage a science fiction radio play at the now closed Little City Espresso Bar & Cafe, where he worked. The two outlined a story and assigned writers to flesh out specific episodes. Over five breakneck weeks that summer, 10 episodes were staged. Each was written, cast and rehearsed over a few days and included Moran’s sound effects, created using household objects from a friend’s kitchen.

That story “didn’t necessarily flow since you were trying to stump the next writer with a crazy, weird cliffhanger,” Colgan said. “We weren’t setting out to do a really well thought-out, well-written radio play. It was more about this experimental process using all these familiar character types and plots.”

Neulander and Moran condensed the sprawling script into a single night’s performance in 2000. They mounted several iterations of this live radio play before Neulander thought to add comic book artwork. Immediately, he and Moran said, audiences responded because they could follow the plot more easily.

“Part of me is a little sad that people can’t just close their eyes” and imagine the story without the slides, Colgan said. “But we’re a visual culture, and I can’t deny that it’s way more popular.”

Adding the slides meant revising the script, since the images set the scene and eliminated the need for a narrator. The pictures also enhanced the sound effects, said Chad Nichols, who collaborated with Neulander and Colgan on the original “Twin Infinity” script and worked with Neulander on later revisions. (Full disclosure: Nichols is married to Texas Monthly executive editor Pamela Colloff.)

In the radio drama version, he said, “You would have to announce that you were going into a tunnel, because you didn’t have a picture of a tunnel.” The sound effects artist would change the timbre of the characters’ footsteps, but such a cue was lost on the audience unless accompanied by dialogue that described the setting. “It was really freeing to be able to do the graphic novel version,” Nichols said, because the characters could talk about their actions and emotions instead.

Moran still uses household objects and children’s toys to create many of the sound effects, which are as much a part of the show as the dialogue and images. A perennial audience favorite is the sound of a chugging train, created by blowing on a toy train whistle and rhythmically shaking a box of macaroni and cheese turned on its side.

Neulander, who produced earlier versions of “Intergalactic” at the Salvage Vanguard Theater, the Austin company he helped to start and ran for 14 years, has devoted himself to the “Intergalactic” world full time since 2008 (even his personalized license plate and email address reference the planet Zygon). He is now expanding the story into new media with a podcast, digital comic books and a web series developed in partnership with the Austin PBS affiliate KLRU.

The web series, which assembles footage of the actors, the pianist, the sound effects artist and the comic panels into a single screen, comes closest to replicating the cinematic experience of a live show. Chris Gibson, an actor who has performed in “Intergalactic” since 2007, said that after shows children often compliment the actors on their “movie.”

“Clearly something is happening in audiences’ brains to pull it all together and to create something more than the individual parts,” Gibson said. 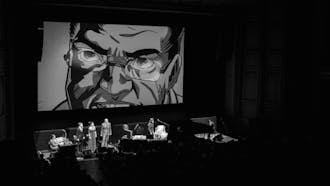 Watch The First Episode of the Intergalactic Nemesis Web Series 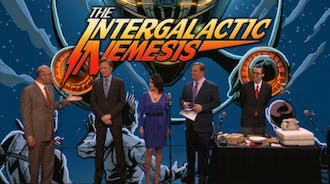