Lifetime is making an Anna Nicole Smith movie, and Lindsay Lohan is the early–if completely speculative–first choice to play the tragic Mexia native.

TMZ first broke the story of producers’ casting calls for all the major parts, and Gawker‘s Louis Peltzman promptly put together his own casting wish list.

Anna Nicole Smith, “a pretty, but plain girl growing up in small town Texas [who] transformed herself though sheer willpower.” Lindsay Lohan. She’s not old enough (though she looks it) or blonde enough (that can be fixed), but if Lindsay can be Lifetime’s Liz Taylor, she can be their Anna Nicole. And everyone would appreciate the metatextuality of a fallen starlet playing another cautionary tale.

Andrew Reiher of Zap2it also suggested LiLo (while joking that it’s more likely to end up being Erika Eleniak), as well as the elder Douglas for the role of Marshall.

But he had William Hurt as Pierce (it’s not like Lifetime can land Michael Douglas, after all) plus Michael Imperioli (The Sopranos) as Stern, and Aaron Paul (Breaking Bad) as Daniel.

The obvious problem with these lists: no Texans. Peltzman had that covered with his most inspired choice, Jacksonville native Margo Martindale, who won an Emmy last year for her work on Justified, as Smith’s mother Virgie.

As Hilary Busis of Entertainment Weekly pointed out, there has already been “a truly awful direct-to-DVD biopic” of Smith starring a sorta Texan: the soon to be former Mrs. Mike Modano, Willa Ford.

And it’s not like Howard Marshall can’t be played by somebody in makeup. Come back to the U.S., Randy Quaid! 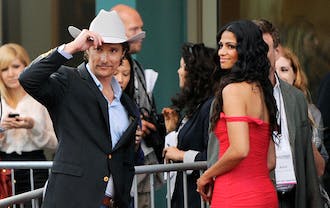