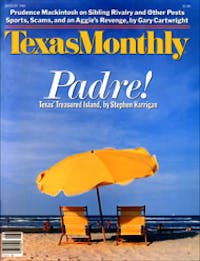 The stars are big and bright. The music is kicky, with a loping, offbeat cadence. The dancers press close, embraced in a peculiar bent-kneed hunch. Across the open-air dance floor they whirl and glide, moving in a mystical communion, floating in a state of grace, like skaters, motionless above the waist. Legs intertwined, hips swinging, they step together ahead of the beat, hesitate as it catches up, rock back on their heels, turn, and turn and turn. This is Texas country dancing, dancing unlike any other.

Writing about dancing is a little like trying to show how a guitar sounds by pointing to the wood and strings. Dancing doesn’t work if you think about it, and good dancers often cannot describe what they do. In Texas, dances are handed down through generations, with older children teaching younger children where to put their feet and how to hold their arms. After decades of weekly practice at community halls, dancing becomes an instinctive movement, indivisible into parts.

But it’s not the steps that make Texas dancing special. There are only a few basic dance steps in the world. What makes some people dance differently is the rhythm of their music, their cultural history, and their style. The distinctively Texan dances are the relatively modern country-swing dances—the one-step, the shuffle, and best known of all, the dignified and sensual two-step—done to traditional Texas country music.

The Texas two-step is the same step known to ballroom dancers as the international fox-trot. Except for the one-step, which is just that, most Texas dances are variations on the two-step, also called a half-step, which is simply a step-close-step. The Texas two-step is generally done with two long steps and a step-close-step to two-four time. Speeded up, it’s a shuffle or double shuffle, but still a two-step. The ever-popular polka, reportedly invented by a Czechoslovakian peasant in 1830, is a two-step with a hop. The once-scandalous waltz, as it is done in Texas, is a fancy Bohemian two-step called a redowa, a name derived from a Czech word meaning to steer or whirl around. And the jitterbug, or Western swing, is a jazzy descendant of a two-step danced by blacks in the plantation South.

Those are all couple dances, mysteriously accomplished with a subtle squeeze of that hand, a cast of the eye, a turn of the shoulder, and a little pressure at the waist. Texans also do line or pattern dances, which are versions of nineteenth-century European folk dances. They include the bastardized cotton-eyed Joe (it’s similar to a Norwegian polka), the German schottische, the put-your-little-foot, and the John Paul Jones.

Country-swing bands, big bands with as many as fifteen pieces, began in Texas, so naturally Texans were the first to dance with them. In the early thirties Milton Brown and Fort Worth fiddler Bob Wills took country string instruments and traditional rhythms of the Old South, jazzed them up, and created Western swing, the country version of the big band sound, influencing generations of country-and-western musicians. “What Bob Wills did was take a heavy-accented two-beat, come in on it slightly early, and lay on the intricate rhythms in between,” says Ted Daffan of Houston, a retired Western swing bandleader and songwriter. The odd, syncopated phrasing, with all that rhythm, is what makes good country music unusually danceable, upbeat, exciting, and tricky.

As the music changed over the years, the style of Texas dancing changed too. People tend to dance straight ahead, in a great counterclockwise mass, instead of in box steps and more intricate foot patterns. Couples have moved farther apart and have stiffened their legs and arms. They even pump their arms back and forth in a style that flourished during the country dancing craze several years back, a curious aping of an action that was once considered an embarrassingly hick thing to do.

Scholars (yes, even Texas dance has them) have debated the origin of the characteristic crouch and gait of the Texas dancer. Some speculated that it was inherited from the spurred and bowlegged cowboy. In fact, the posture is the result of dancing on the ball of the foot, in boots of course, with a very bent knee. With loose knees the dancer glides and catches the beat, for in the knees and legs live all the sweet and wild rhythms of the bluegrass South and the old country, of blues and jazz, of the horse, the train, the wind, and the West.