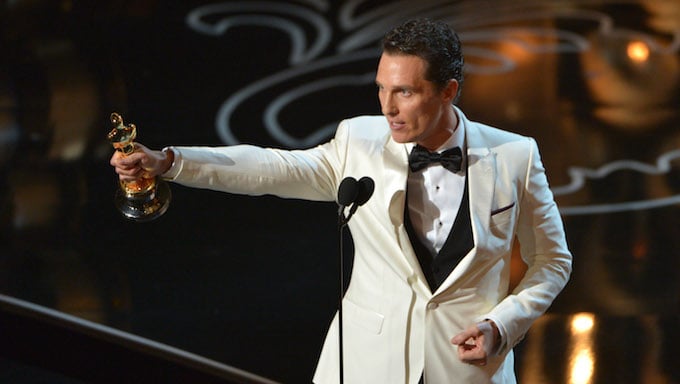 Trying to figure out what to wear to the McConaissance Faire? Try an article from the man’s clothing line, which absolutely does exist and isn’t just something that you hallucinated in a Rust Cohle-like fever-dream. The just keep livin line of men’s casual fashion—which will henceforth be described as JKL, because even McConaughey, in a decision that we’ll choose to interpret as a matter of humility, seems to prefer the acronym himself—actually launched way back in 2008. But given the ongoing McConaissance, which culminated in Sunday night’s unfathomable-even-three-years-ago Best Actor win at the Academy Awards, it’s worth revisiting, especially given that he’s capitalizing on the acclaim to deliver “Alright, Alright, Alright” t-shirts.

Given the attention on McConaughey right now, it seems inevitable that someone would be releasing “Alright, Alright, Alright” t-shirts, so give the man credit for knowing precisely how to own his moment. And the new shirt will probably be the flagship in the “all-journey performance wear” line that, a quick peek through the online outlets that sell it show, isn’t performing all that well.

In the U.S., JKL clothing is sold exclusively through Dillard’s. The lineup available to consumers, however, is not exactly extensive: There are only 15 items listed on the website, and more than half of them enjoy a “permanently reduced” pricing arrangement. That jacket up there? It’s now 60% off, which suggests that the McConaughey revival magic that transformed him from the star of Surfer, Dude to an Oscar winner does not extend to his nylon windbreakers. Graphic t-shirts, meanwhile, with McConaughsisms like “Be a lot cooler if you did” or “Satisfaction is a science” seem to do a bit better among the Dillard’s set. At the very least, they maintain their full price, which bodes well for “Alright, Alright, Alright”: The T-Shirt.

Of course, the somewhat slim promotion for JKL clothing at Dillard’s just means that U.S. shoppers face limited options when trying to demonstrate their inner McConuaghty by way of their sartorial choices. The Canadian line, available at Sears stores in the frigid north, features three times the catalog that Dillard’s does. It’s in Canada that the McConaissance truly extends not just to film and television (when next year’s Emmys roll around, look for the man to be halfway to an EGOT), but also to menswear.

In Canada, if your hero is Matthew McConaughey circa ten-years-from-now, you can show that through a number of clothing options: khaki utility cargo pants, a variety of cable-knit sweaters, puffer vests, multiple performance fleece pieces, and more. The graphic tees extend their wisdom to aphorisms like “closer to the root, hotter the pepper,” “keep your eye high,” and “at home in the world,” and all of the plaid shirts—of which there are many—will surely look even better unbuttoned. In true McConaughey fashion, in fact, even the extensive Canadian version of the line only offers a mere two pairs of pants, which is surely not an accident.

McConaughey is one of our truly weird movie stars, and plenty of pixels have been spilled on screens remarking on just how unlikely it is that, at this point in his career, he’s evolved from Ghosts Of Girlfriends Past and Sahara to serious-leading-man status. The class of Hollywood blockbuster he’s pursuing now has jumped up considerably, as well—prior to the recent reinvention, the idea that a director with as much cachet as Christopher Nolan would tap McConaughey to headline his sci-fi adventure film would have been ridiculous. But as delightful as it’s been to watch him inspire change in Dallas Buyer’s Club, teeter on the edge of oblivion in True Detective, or get Leonardo DiCaprio to ruin the world in The Wolf Of Wall Street, the real joy of McConaughey is the fact that he’s such an iconoclastic weirdo. Of course he would also have a line of middling menswear available at mall department stores throughout the United States and Canada, and of course that line would offer t-shirts that say, “Alright, Alright, Alright.” It was the McConaugheyest of times, it was the McConaugheyest of times, after all.