Jerry Jones provokes a complex ball of emotions for Cowboys fans. On the one hand, he is the man who fired Tom Landry and Jimmy Johnson and led the team to a decade-plus of mediocrity. On the other—with the help of his son, Stephen—he assembled the league’s best offensive line, its most promising rookies, and brought the tantalizing prospect of a return to glory to the team’s fans.

In Latin, they have four words for “love,” and maybe one of those would be more effective in pinpointing how Cowboys fans feel about Jones. You know who we should ask? The Pope.

Jones was part of an envoy from the NFL that was granted an audience with His Holiness at the Vatican on Wednesday. The Cowboys owner was joined by his wife, Gene, as well as (non-Cowboy) Hall of Famers Curtis Martin, Chris Doleman, Franco Harris, Jim Taylor, Ronnie Lott, and Floyd Little. Jones, naturally, presented the pontiff with a gold football helmet signed by the assembled gridiron greats.

It’s unclear if the helmet has found its home in the Vatican’s secret archive, next to the Papal Bull excommunicating Martin Luther, Michaelangelo’s Last Judgment, and the documents from the trial of Galileo.

According to a press release issued by the Pro Football Hall of Fame, the Pope’s remarks to the assemblage of Hall of Famers were as follows:

“I am pleased to greet you, the members and directors of the American Pro Football Hall of Fame and welcome you to the Vatican. Teamwork, fair play and the pursuit of personal excellence are the values — in the religious sense, we can say virtues that have guided your commitment, on and off the field. These values meet the needs of our brothers and sisters and combat the exaggerated individualism, indifference and injustice that hold us back from living as one human family.”

This wasn’t the first time that Pope Francis has expressed an interest in America’s game. Before this year’s Super Bowl in Houston, he offered a message to fans of the NFL, explaining via a video his belief in the importance of sports.

On this special day, we bring you a very special message from Pope Francis (@Pontifex). #SB51 pic.twitter.com/LtNlcpCnYy

Meanwhile, let’s hope that this Texas Monthly cover from 2001 wasn’t prophetic in any way. 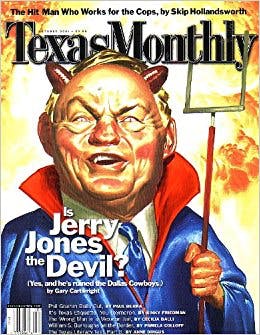