As crowds in Dallas gathered last week to peacefully mourn police killings of two black men—Alton Sterling in Louisiana and Philando Castile in Minnesota—they would soon find themselves seeking safety from another gunman. Reports of multiple snipers shooting from elevated locations came in, along with pictures and videos of the horrifying event. Amid the chaos, the Dallas Police Department’s Twitter account, which had previously been giving updates about the Black Lives Matter protest, soon posted a picture of a smiling black man with a rifle slung over his shoulder. “This is one of our suspects,” the tweet read. “Please help us find him!” 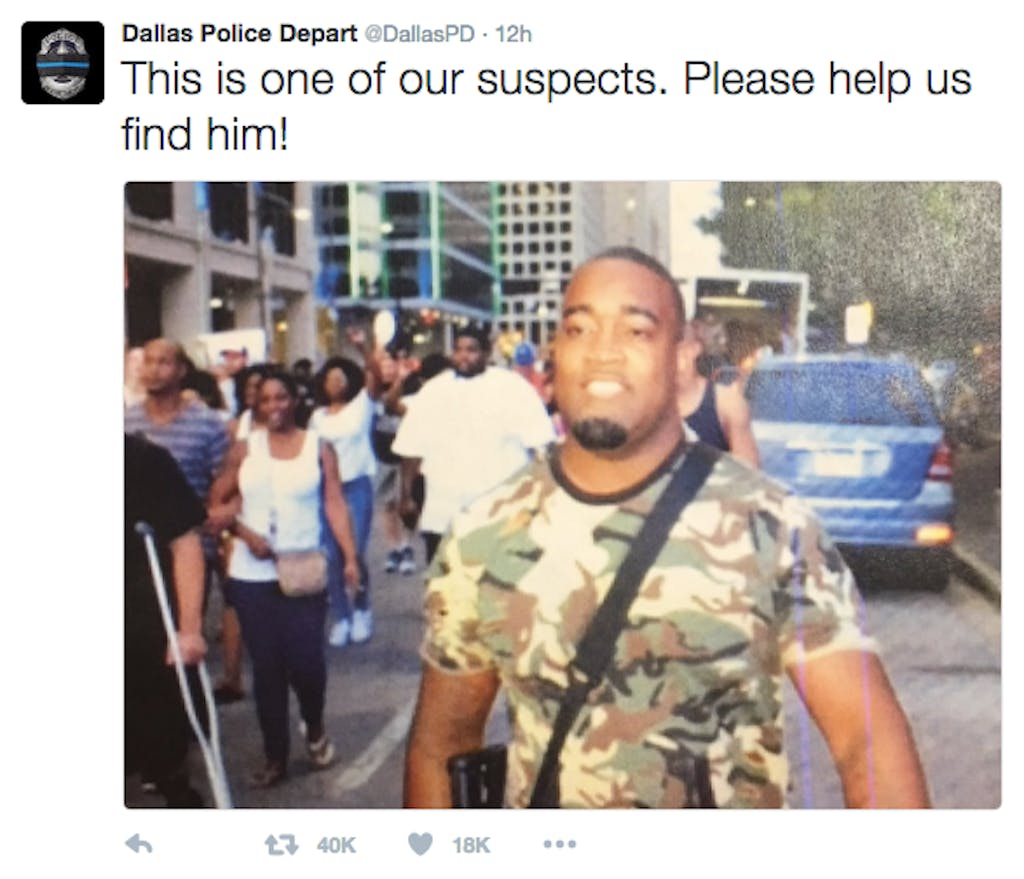 The man was Mark Hughes. Immediately, Twitter users began to question why police had shared the picture without giving much information as to why he was a suspect. Yes, he had a rifle, but it is legal to openly carry rifles in Texas. And Hughes wasn’t the only person exercising that right. According to Dallas police chief David Brown, there were about twenty or thirty people at the protest with rifles, and all of them fled with the rest of the protesters when the shooting began. None of people toting rifles acted as vigilantes, but they still complicated matters for the police department, which then had to track them down as people of interest. That makes sense. What doesn’t make sense is how only Hughes’s pictures was shared on social media as a suspect.

Pictures and videos of Hughes during the protest and in the moments when the shooting began were quickly shared on social media as other protesters rushed to explain that he’d been on the ground, not shooting. When Hughes’s brother, Cory, found out that the department was circulating his brother’s picture and calling him a suspect, he told Hughes to hand his gun over to a police officer in order to avoid being seen as a threat. There’s even footage of this handoff. Hughes also turned himself in for questioning, and he was cleared and released in about thirty minutes.

Meanwhile, Cory Hughes was talking to reporters to try and clear his brother’s name, because his picture still posted on the Dallas PD Twitter account. In fact, Hughes’s picture stayed up for over fourteen hours, well into the next day, even though he had been cleared as a suspect. When a department spokesperson was asked why the tweet hadn’t been deleted, the reply was abrupt: “Because we’re keeping it on there.” When Hughes was released, he told CBS 11 that during interrogation with police officers, they claimed to have video proof and witnesses who saw him shooting his gun, “which is a lie,” he said. According to Hughes’s lawyer, Corwyn Davis, since Dallas PD posted Hughes’s picture on Twitter, he and his brother have received thousands of death threats.

Confusion and misinformation during an event as horrific as a mass shooting is to be expected. There are bound to be mistakes. Similar things happened after the Boston Marathon bombing when Reddit users incorrectly went after Sunil Tripathi, and the New York Post placed an image of Salaheddin Barhoum and Yassine Zaimi on its front page, falsely claiming that the FBI was looking for these “bag men.” Yes, initial mistakes are bound to happen, but when Dallas PD irresponsibly posted Hughes’s image on social media while the shooting was still happening, they made him a target.

When a reporter asked Cory Hughes why his brother brought a gun to a peaceful protest, he responded with that it was for “the same reason that across the country, other people bring their gun: because it is his right.”

On paper, that right belongs to all Americans, but historically and in the present day, it often does not extend to black Americans in the same way that it does to white Americans. A Facebook live video captured by Diamond Reynolds, Philando Castile’s girlfriend, showed that Castile was shot by a police officer. He had apparently informed the officer that he was legally carrying a gun and was reaching for his identification. Louisiana, where Sterling was shot by an officer who believed he had a gun, is an open carry state. In Ohio, another open carry state, both John Crawford III and twelve-year-old Tamir Rice were shot and killed by police while holding toy guns. The fear of a black person with a gun, no matter how compliant and nonaggressive they are, has long been used as justification for their death, because the Second Amendment has never really been for black people.

Keeping guns out of the hands of black people, freed or enslaved, was one of the key factors in the decision of Dred Scott v. Sandford. The original fear of slave uprisings or retaliations furthered the image of black people with guns as aggressors, even as they only sought to protect themselves and their families from violent discrimination and lynchings. Even Martin Luther King Jr., who received multiple death threats and was eventually murdered, was refused a concealed carry permit. The desire to keep guns out of the hands of black people was so strong in 1967 that after an armed group of Black Panthers gathered at the California state capitol to advocate for black citizens’ ability to arm themselves, then–California governor Ronald Reagan signed into law the Mulford Act, which repealed an open carry law in California. That and other gun control laws that followed had the full support of the National Rifle Association.

Yes, that National Rifle Association. The same NRA that now pushes back against even the mention of gun control. The same association that white gun owners claim as they organize armed rallies at the Texas Capitol and gather in front of mosques. The same NRA that released a statement on the mass shooting in Dallas but hasn’t commented on the shooting of Castile, a black man killed for practicing the very right they claim to defend. So far, they’ve only stated that they would comment “once all the facts are known.”

Considering the history of America’s views toward black Americans with (or without) guns, the NRA’s silence, and the killing of Castile and others like him, the identification of Mark Hughes as a suspect only makes sense. When Hughes decided to attend the protest armed, he was following the footsteps of other black people who have tried to claim the right to protect themselves in the face of governments and institutions that wouldn’t. He was following in the footsteps of Harriet Tubman, Malcolm X, and even Philando Castile.

Eventually—and without apology—Dallas PD took down Hughes’s picture. And Hughes, frustrated by his treatment and how his name and image are now sullied, still knew that he was one of the lucky ones. “Hindsight 20/20,” Hughes told CBS 11. “I could have easily been shot.”