Last week, UT System Chancellor William McRaven announced that each of UT’s fourteen institutions will now require that at least one woman and one minority are interviewed in the final steps of the hiring process for senior-level positions. It’s too soon to congratulate the UT System on an inclusive method that’s long overdue, but as tension at the University of Missouri comes to a head, it’s not hard to see why it’s necessary.

The new practice is adopted from the NFL’s Rooney Rule, a policy named after Dan Rooney—the owner of the Pittsburg Steelers—who encouraged the league to interview a person of color for every available head coaching position. McRaven notes that though the policy doesn’t necessarily guarantee more women and people of color will be hired by the UT System, but “it will put more women and minorities in a position for the selection committee to recognize the great talents that may have heretofore gone unnoticed.”

Although individual UT institutions have made efforts to address the lack of diversity on their campuses, the levels of success haven’t been high. The University of Texas at Dallas had the goal of increasing their black, Hispanic, and Native American faculty population to 15 percent by 2015, but by fall 2014 it was only at 5.9 percent. At the University of Texas, Bill Powers reduced the overwhelming white student population to 46 percent, but 77 percent of the faculty members were white.

This call for more deliberate hiring practices on campus comes at an interesting time for the UT System and other universities around the country. As Abigail Fisher is still trying to battle it out with UT Austin over an affirmative action policy she says discriminated against her, a white woman, the university is still struggling with a low black student population — around 4 percent — and racial conflicts such as bleach balloons thrown at students of color and racist frat parties. One of the hulking, ever-present symbols of racial tension, a statue of Confederate president Jefferson Davis, was only just removed in August.

Even with a long way to go, McRaven’s comments on the Rooney Rule display an understanding of the importance of representation in university leadership.

“Making sure our faculty and staff reflect the changing look of Texas is not just about fairness,” McRaven said in his presentation. “It’s also about effectiveness. We need faculty, administrators and campus leaders who understand the people they’re serving, who come from the same kinds of places.”

That kind of understanding could have helped quell the rising tensions at the University of Missouri, where online threats to black students have spiked since president Tim Wolfe resigned. Perhaps having something like the Rooney Rule in place would have helped. Having a more diverse leadership will not only encourage a more diverse student population, but also provide a better network of support and understanding when issues arise.

The university shall provide a positive recruiting and work environment focused on the duties and skills of the work to be performed. It is the board’s expectation that all employees and potential employees will be treated on the basis of their contribution or potential contribution without regard to personal characteristics not related to competence, demonstrated ability, performance, or the advancement of the legitimate interests of the university.

It’s way too soon to know how the Rooney Rule will change institutions in the UT System, but the hope is that it’ll prevent some of the failures Mizzou has experienced. Perhaps more people of color in senior-level positions on the University of Missouri faculty would have taken matters more seriously when students began protesting racist incidents on campus earlier in the school year. Perhaps more diverse leadership would have encourage former Wolfe to apologize to students sooner after he sat silently while his convertible driver tried to maneuver around protestors during the school’s homecoming parade. Perhaps black leadership would have been more concerned about a grad student on a hunger strike before the Mizzou football team joined the protests. Perhaps. 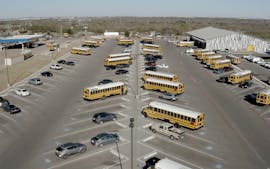