On Friday, six-month-old Dillon Martinez was supposed to be at day care while his dad worked. The boy’s father drove to his job at the Helotes Walmart at 6:15 in the morning, and when he returned to the car at 3 p.m., he realized what had happened: He left the infant in the backseat. Police and paramedics were unable to revive Dillon.

The man—whose name hasn’t been officially released—was hospitalized with chest pains upon returning to the car, though reports indicate that he was cooperative with police during the chaotic scene. At this point, Dillon’s father hasn’t been arrested or charged with a crime—though there are plenty of people on social media and in comment sections without much empathy for the man. 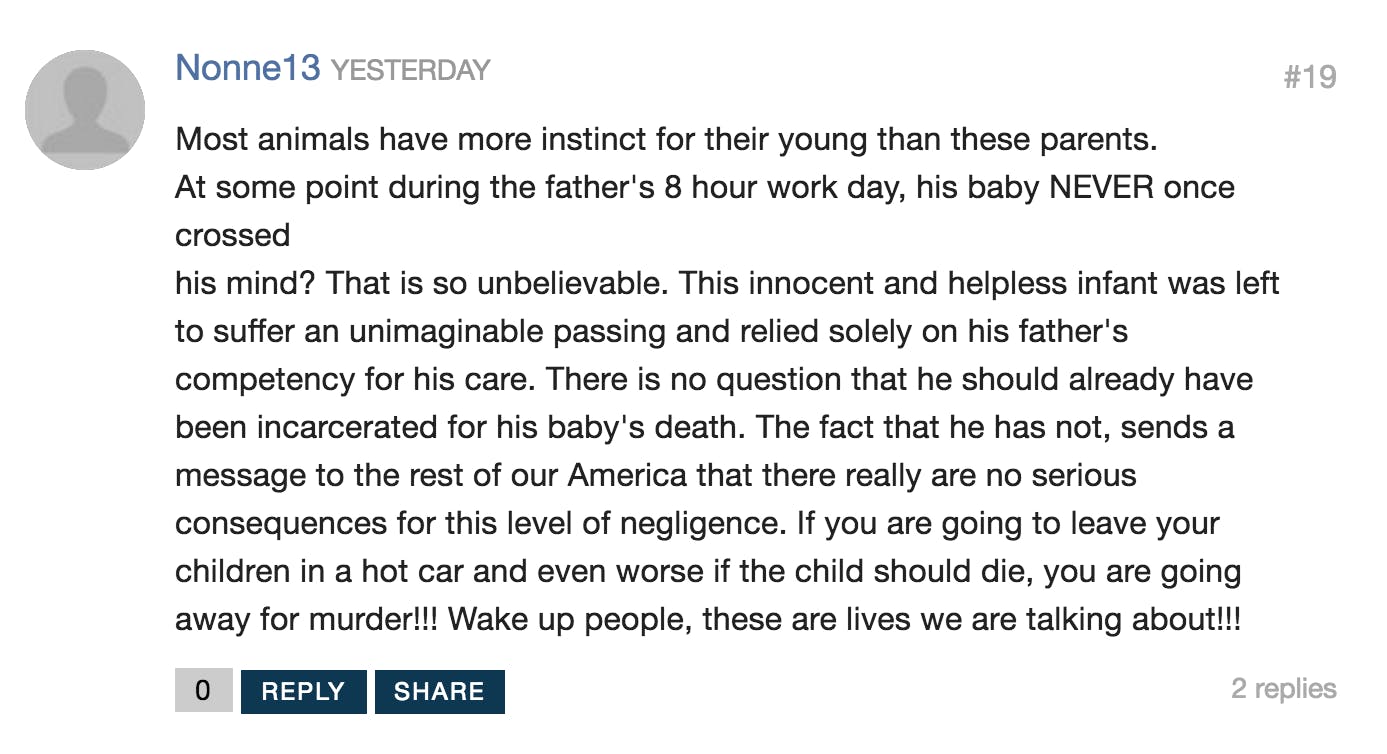 In 2016 alone, 27 children have died in hot cars. There is often prosecution that follows, but not always. A 2014 case in Georgia is going to trial this month—prosecutors are pursuing murder and child cruelty charges, believing that the man in that case acted intentionally because he had allegedly returned to the car throughout the day and drove for some distance after leaving work. But even in cases where the suspect’s motives don’t appear to be cruel or malicious, prosecutors sometimes bring charges against them.

That happened to Wade Naramore, an Arkansas judge whose eighteen-month-old son died after Naramore drove to the courthouse with him and left him in the car for six hours. Naramore was charged with negligent homicide, and his trial for the Class A misdemeanor began with jury selection on Monday. He could face up to a year in prison if convicted.

In other cases, though, no charges are brought. Austin’s KXAN investigated why there is such disparity with these cases last year, when no charges were filed against a woman who left her three-month-old in a car in South Austin. KXAN found that there’s no real way to tell if charges will be brought.

“What we have found is that there is really no rhyme or reason to whether a parent is charged or not and if they’re convicted,” said Amber Rollins, Kids and Cars director. “You can have two exact same circumstances in two separate cases, and in one case a parent might not be charged at all and in another case the parents are charged to the full extent of the law.” […]

Kids and Cars looked at cases dating back to 1968 of children dying from heat stroke in cars. However, most of the data is from 1990 to 2014. When it comes to accidental cases, the organization found about 28 percent of accidental cases result in convictions, no one is charged in 39 percent cases, and the others either had an unknown outcome or never made it through to conviction. The conviction rate is higher for cases where someone knowingly left a child in a car, at 60 percent.

That leaves a lot to the discretion of the individual prosecutor, which makes sense in a lot of situations, but when talking about the accidental death of a person’s child feels rather arbitrary. Accidentally leaving your child in the car while you go to work is a tragedy whether it occurs in Austin, Helotes, or Arkansas, but it’s only a crime depending on which prosecutor’s desk the case lands on. That’s an inconsistency that is hard to justify, given the circumstances that the person who may or may not be facing charges is already suffering through. Still, on comment sections and social media, there are plenty who demand additional punishment.

Right On Crime, the Texas-based conservative criminal justice reform organization, argues that incarceration should be for the people we’re “scared of,” not the ones we’re “mad at.” There’s plenty to be angry about when a child dies due to someone’s negligence, and we often do think of the criminal justice system as a place to address that sort of grievance. But the fact that it leads to a deeply uneven approach in punishment, though, makes things complicated. It’s certainly tragic when a child dies in a hot car, but when determining how to address the problem as a society, it seems like it’d be best to find a way to do it that’s consistent.

The State of Texas Tried to Kill Ernest Willis. But He Still Had a Lot of Living to Do.