Since Sandra Bland died in mid-July, a number of activists have been keeping vigil outside of the Waller County jail nearly every day since her death. Hempstead is the sort of rural that people who live in cities — like many of the activists who have traveled from Houston — don’t quite understand: The parking lot at the jail is gravel, and across the dusty street from the building to the east, you can spot horses in an unfenced yard munching on vegetation maybe thirty yards away. The building itself is a drab and tan, the exterior mostly marked by gutters and windows, and a tall chain-link fence with razor wire at the top. It is a jail, after all.

It’s also a base for law enforcement in Waller County, which means they have police vehicles. If you walk around the side of the building, from the front to the back, you can see them: armored cars, a bus — oh, and a Batmobile. That’s a tan, armored truck with Batman logos on the front, apparently ready in case the Joker ever gets loose in Hempstead.

In the early days after Bland’s death, there was talk about how to organize big protests — the kind we’ve seen in Ferguson and Baltimore — in Waller County. Hannah Bonner, who’s been at the jail most days since Bland’s death, has been organizing in the area, and she says that until people actually see the area, they don’t understand how difficult that is. “It’s not like other places,” she says.

Bonner wears a white collar along with her blue satin blouse. She’s a Methodist pastor at St. John’s Church in downtown Houston, as well as an organizer of the Houston spoken word/activism organization The Shout. She’s a petite, blonde-haired white lady who talks about how the media, depending on how they choose to slant the story they’re telling, either crops her out of the frame or focuses the camera exclusively on her. There are seven demonstrators outside of the jail the day I meet her, and Bonner is the only white person among them. “It depends what narrative [the media] want,” she says.

Another person outside the jail is Rhys Caraway, a young black man from Houston whose vigil in Sandra Bland’s name is his first experience with activism. “I’d wanted to before,” he says, “But I didn’t necessarily have the opportunity. But this hit really close to home. I went to Prairie View, my sister went to Prairie View — it could have been any of us.” Texas A&M-Prairie View University, where Sandra Bland was about to begin a new job, is in Waller County, too, but the makeup of the student body defies the demographics of the rest of the area — Waller County is 70 percent white, but the student body of Prairie View is 86 percent black.

Caraway’s idea that this could have been any of the black demonstrators outside of the jail is central in the discussions happening in that Hempstead parking lot. The fact that it most likely couldn’t have been the white activist Bonner is relevant to the group, as well. “In this nation, we grow up differently. I was raised differently than Rhys was raised,” Bonner says. “I was raised to see the police as people who were there to protect me. And that’s true—the police are here to protect me, because I’m white. Rhys was raised in a different way.”

There are several police officers in Caraway’s family, but for him, that experience only meant that he learned from an authoritative source that he’d be at risk in certain neighborhoods and situations. “Even though they’re police, at the end of the day, they’re still black,” he says. 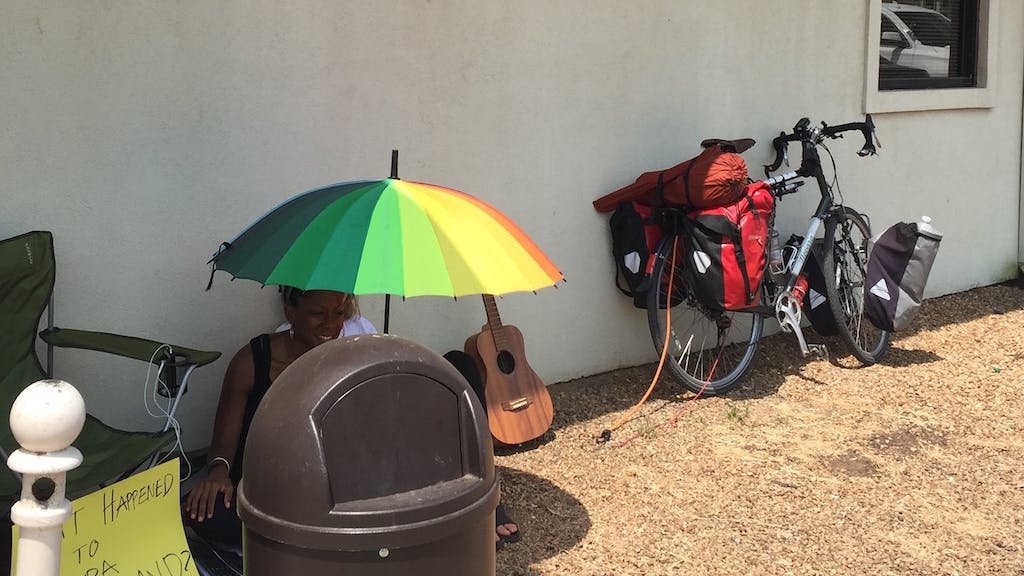 The law enforcement officers who work in the Waller County jail are extremely friendly to Caraway and the other demonstrators. “They’ve been really respectful to us, and we’ve been really respectful to them,” he says.  “They come out and ask us if we’re staying hydrated,” he says, and they let them in for bathroom breaks. And drinking water is important in Hempstead, where the summer temperatures frequently break 100 degrees and the shallow awning over the sheriff’s office provides little in the way of shade.

Most of the demonstrators have folding camping chairs, and some have packed umbrellas. It’s clear that this demonstration is important to them, but they’re sitting in a dirt parking lot with signs that read “What Happened To Sandra Bland,” a couple miles off of Highway 290, on a road few people besides the Waller County Sheriff’s Department officials have much cause to drive down, in 102 degree heat, for weeks on end.

“But our generation is sort of like a microwave—we want action, and we want it now. And if we don’t get it, we sit down and relax until the next problem happens, and then we get upset again, and we keep doing this process.”

A young woman named Jessica Davenport, who sits on the ground with a rainbow-colored umbrella for shade, explains what she’d like to say to any of the politicians who might wonder what she’s doing out there on a hot day. “As far as those who are running for political office, black lives need to explicitly be part of the agenda in politics,” she says. “Not just in terms of writing on a Facebook page that #BlackLivesMatter. We all do that,” she says. “The ways in which other topics have become point issues, where politicians can not get elected if they don’t speak to those — that’s what must happen with black folks, and the things we’re experiencing.”

Davenport is only on her second day outside of the jail when talking about politics. It’s clear from talking to her for even a few minutes that she’s got incisive thoughts about race problems in America, but that she doesn’t anticipate that those things are going to be resolved outside of the Waller County jail. She doesn’t expect that the changes she wants to see are being shaped in a direct way by her actions, which makes the entire experience outside of the jail a curious one to fully understand. It’s hot, and it’s boring — it’s a parking lot. People look at their screens a lot. Bonner has a guitar, and she jokes that she’s going to play the group Leonard Cohen songs if they’re not careful. People chat about various things, or they sweat, or they read — the sort of stuff that most people in a place like Hempstead do. 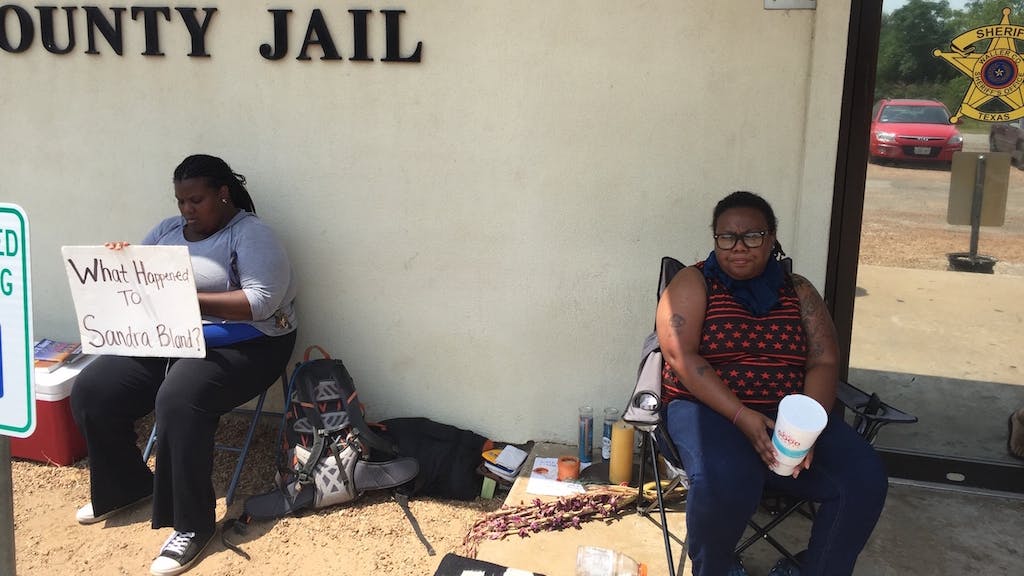 When you’re talking with people who clearly have conviction — and after sixteen days in the heat, it’s clear that this group does — it seems rude to ask, “Why are you doing this?” We’re unlikely to get answers about what happened to Sandra Bland that satisfy everyone, and whether the officer who arrested her keeps his job or not isn’t the burning question on everyone’s mind. So I can’t help but ask: Is this how any of them expected they might spend their summer?

A woman who’s been sitting on the other side of the doors from Caraway, Bonner, and Davenport speaks up for the first time. “She’s got a really good answer to this,” a friend sitting near her says. So I meet Karisha Shaw, a young black woman relishing the little shade left at this time of day.

“It’s not how I pictured myself spending my summer,” Shaw laughs. “But our generation is sort of like a microwave—we want action, and we want it now. And if we don’t get it, we sit down and relax until the next problem happens, and then we get upset again, and we keep doing this process. With every movement that’s ever had any great momentum, it started with people sitting, just to learn what they were actually dealing with. As long as there’s injustice in the world, I think that people need to be sitting somewhere. And for me, it’s in Waller County.”