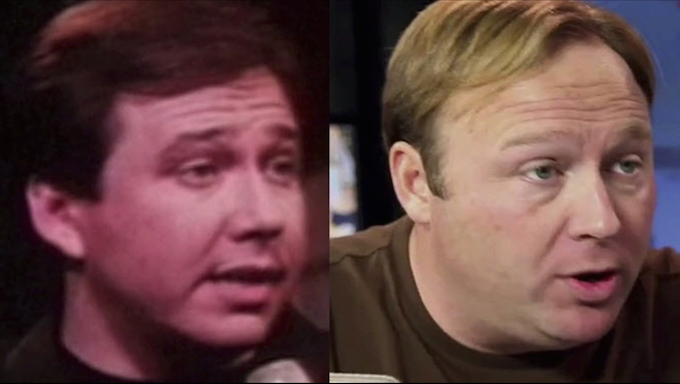 Alex Jones is no stranger to conspiracy theories, obviously, but here’s a really good one that doesn’t come from him—rather, it’s about him: Have you perhaps heard that he is actually legendary Texas comedian Bill Hicks, who allegedly died in 1994, but who was actually “recruited by the CIA to become the controlled opposition by the mainstream media” who was “continuously fed approved intelligence by his CIA handlers”?

If you haven’t heard that, fret not. There is a 33-minute long video on Vimeo, created by a user who goes by the name “CastleJenniferBassett” with the catchy title of “IRREFUTABLE PROOF that Alex Jones IS Bill Hicks.”

Thirty-three minutes is a long time to spend watching a conspiracy video, but with the promise of “irrefutable proof,” it’s hard not to at least be a little curious what the argument involves.

It begins with a bit from Hicks that opened his final comedy record, Rant In E Minor, in which Hicks—whom the sheeple would like you to believe was dying of pancreatic cancer at the time—claimed he had just sold a television series. After the audience cheers, he explains that the series is called Let’s Hunt and Kill Billy Ray Cyrus, who spent the early nineties as a mild country star before going on to his true purpose of raising his daughter, Miley, into the defining pop culture figure of 2013.

If you ignore the most obvious answer (it sounds like a man who is making a joke, which is appropriate behavior for a professional comedian performing his act in front of a paying audience), it really does make you think—as does the fact that, if you photograph the two of them from the same angle, they do look a bit similar.

Leaving aside the fact that two kinda doughy white guys photographed from the same angle, with their hair parted in the same way, might bear a superficial resemblance, the video goes on to explore the similarities in Hicks’ and Jones’ teeth, which are not dissimilar, but we’re not experts. Their noses, meanwhile, don’t look all that much alike, but that’s probably intentional misdirection on the part of the conspirators. How easy is it to get a nose job to throw people off the scent? (Fine, pun intended.)

All of this is actually the fun of conspiracy theories—if and when you decide that they’re true, every fact that supports the theory is gospel, while every fact that contradicts it is proof of just how deep it runs. Jones, for example, is forty years old, while Hicks would be 53 today—but that’s probably just what they want you to think, in order to further throw you off the scent. How simple it is to plant fake identification, if you’re backed by the CIA, after all?

There are plenty of good ways to refute this theory, ultimately, but “Bill Hicks died in 1994” is all we really need. (The fact that we both believe this and are publishing it, presumably, makes us part of the conspiracy—can’t wait for the CIA kickbacks, y’all!) But there’s a question or two worth considering that this video raises nonetheless. When the AV Club wrote about it yesterday, one of the points they make in their refutation of of the theory is that:

Hicks and Jones admittedly do share a passing similarity in looks, and both are given to passionate oratory, but Hicks existed on a wildly different side of the political divide than Jones.

At the end of the 1994 documentary about Hicks, It’s Just A Ride, Jay Leno—whom Hicks was fond of attacking unsparingly—talks about what Hicks might have developed into, had he lived. “It would have been a wonderful thing,” Leno says, “To see him as a sixty-year-old curmudgeon, still smoking and drinking, and looking terrible and talking about losing weight and never doing any of this.” And it’s possible that Hicks, who would be 53 if he were alive today, would have mellowed with age. But it’s also not impossible that had he lived, he’d take his passion for berating people who offended him and anti-government conspiracies on a sharp right turn.

In any case, all of this is an interesting thought-exercise, but nothing more. Bill Hicks died of pancreatic cancer in 1994, at the age of 33. Alex Jones may have similar teeth (we guess?), and some similar ideas about how power in the world works, but their journeys are pretty different—conspiracy theories to the contrary be damned.

By TM BBQ Club
Being Texan