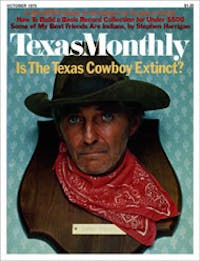 From all reports on the front, the art scene in Texas is being infiltrated by artists from all over the country. The word is out that Texas is a good place to work. That means studio space is relatively inexpensive; there are people interested in art who also have money to spend on it; and a host of new museums are beginning to exhibit the work of younger, relatively unknown artists.

The new director of the Fort Worth Art Museum, Richard Koshalek, is himself an immigrant—previously Curator at the Walker Center in Minneapolis. “In the Sixties we were all interested in California,” Koshalek says. “I think Texas is the same way right now.”

For years, of course, Texans have been importing their art, blue-chip art procured and certified by the Art Establishment, who operate mainly from the cosmopolitan confines of New York and Los Angeles. But perhaps this development, this migration of artists away from their traditional enclaves, means that this cultural stranglehold will be broken.

While chance and curiosity may have had a hand in bringing some of the new artists to the state—a car breaking down in Dallas, a teaching job available, the light being particularly fine on decision-making day—it is support which keeps them here. Most of the ones who stay feel they have found a whole new market for their work here, and a refreshing enthusiasm from patrons and museum directors whose tastes are independent. We asked six recently arrived artists to tell us what prompted their move to the state and what kind of artistic climate they have found here.

I chose to be isolated for a while, to find out what I was made of. I came here to teach ceramics at East Texas State. In terms of imagery, I don’t think my work has changed, but, there’s an energy here, a kind of freedom. You’re really able to branch out. But here’s the problem about the whole Texas image thing: in trying to make Texas art you’re going to try to identify it, classify it, and get it all down before you even get started. Right then and there it’s overstructured. Then you get a bunch of hippie artist cowboys. So many people come here—very gifted, established artists. All of a sudden they become Texas cowboys, hootin’ and hollerin’. What’s going on? But there is something happening here. There’s not a tremendous awareness of it yet; it’s as if everyone was waiting. All those brand-new empty museums all over the state: like a bid for a kingdom.

I used to live in Massachusetts but I discovered Texas cities on a trip—I hadn’t realized they were so green and neat and clean, so I came here to get a studio. The environment, the space, Texas in general are all important, but it’s mainly the light here that I work with. I can watch the different things I do with pigment change in my paintings; it really got me, spiritually, because light is spiritual to me. Your creativity breathes with your physical space, and when I move around Dallas I feel free. Elsewhere you have more going against you than you do here. People see your work, get excited about it, tell someone else, and all of a sudden they’re over here buying a painting. I’ve been able to exist mainly because I work in scale. My work lends itself to buildings, to the viewer in the community. Buck­minster Fuller once said in a lecture here that “you can get to any place in the world within thirteen hours from Dallas.” I realized I was cycling my energies in the center of the world, and I thought, well, that’s a good thought, I’d rather be here than anywhere. There’s a culture-consciousness starting; it’s just taking time.

Jan: There aren’t all the rules and regulations in Texas that there are in New Orleans and New York. The excitement of Texas is that there is a lot of open­ness here, and a lot of receptiveness. Something new might be able to happen. In New Orleans you know that you show at such-and-such a respectable gallery and that if you’re very fortunate maybe you’ll sell enough to buy materials. Everything there is totally controlled. If you moved to New Orleans as an out­sider—they use that word—you’d just feel that. In Texas everybody says, “Oh, do you like it here?” They’re so delighted that you’re here. We love being in Galveston; we have a big space to work in here. We think people who see our work [neon and Plexiglas] will feel they are getting something for their money.

Janice: The galleries in New Orleans used to do so well because sophisticated tourists from New York, Paris, and London would come through. But the city got more run down and violent and the nice people stopped coming. Now they come to Houston to do things like opera and ballet.

Everybody was saying, “You’re going to Texas—what? You crazy fool! Okay, go there, make some money, and come back to New York.” That’s what I in­tended, but I got stuck here. If you think you can go to Texas and enrich your­self culturally, forget it. It’s a weird place, visually. You go down the commercial streets—all of a sudden you look up and there’s this giant big cow standing on a pole; it’s an entirely different experience, as funky and junky as you could ever imagine. I go back and forth to New York; that’s where I’ve been selling my sculpture. If an artist thinks he can make it in Dallas, from Dallas, well, that’s a dream. There’s absolutely no art awareness in Dallas. I don’t know about other places in Texas; they say Houston is a lot better. Collectors don’t make an art scene; the scene is made by the general public. The collector who buys the work of the famous artist doesn’t make any difference. There’s a potential here in Texas but it’s not well directed. We need more strong artists who could work together and make something important happen, right here in Dallas or anywhere else.

I wasn’t able to earn a living making films in places like Michigan, Ohio, and Arizona. I was on my way to Oregon to take a teaching job when my car broke down in downtown Dallas. I knew a lot of people here, so I stayed. If you can stand the criticism, you can live in Texas. If you can’t, you’ve got to get out. There are a lot of images here—beyond the cows and the cowshit and the blue­bonnets—that are important. There’s also a lot of energy. You can’t sell a lot, but if you have what is commonly called a project, there are people who are willing to sponsor that, to take that gamble. Of all the places I’ve lived, people here are freer to do that sort of thing; they’re not so conservative when it comes to cash outlay. I do some tapes and some audio pieces, but mainly films. I deal in four major themes, the things I know most about: sex, violence, power, and money. Those things take up a good portion of my life, and everybody else’s. I don’t know how long it’ll last—my being in Texas. I have to do a lot of actual hustling but I’m glad to be here.