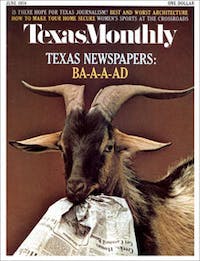 But we continue letting it into our days because it is a habit or because television’s half-hour off news roundup doesn’t satisfy our appetite, or because we like Brand X’s sports page or agree with Brand Y’s editorial opinions. We rarely like every attitude and every section one newspaper sends our way, and we frequently suspect it isn’t doing us justice as a whole or in specific news areas.

Texas Monthly decided to take a professional look at Texas’ daily newspapers. We went outside the state for judgement—to Kenneth M. Pierce, managing editor of the Columbia Journalism Review. To salve any remaining Civil War wounds, we note that Pierce has good summer memories of the Texas Hill Country from years back. He’s no stranger to these parts.

We also decided to skin newspapers down to their individual parts. Papers, like Boy Scout knives, have parts designed to do different jobs—covering various kinds of news, campaigning for progress, advising consumers.

So the editors of Texas Monthly asked Pierce to rate the individual sections and news coverage of The Austin American-Statesman, The Dallas Morning News, The Dallas Times Herald, The Fort Worth Star-Telegram, The Fort Worth Press, The Houston Chronicle, The Houston Post, The San Antonio Light, and The San Antonio Express. The result would be a fantasy publication, a composite of the best of Texas newspapering. Pierce agreed, noting that a full-scale scholarly study, including counting he amound of space given to different stories, for example, could not be accomplished by one editor in a short time. With the caveats, then, that his choices are based on the editions of March 7, 8, and 9, 1974, of the above nine papers, and reflect his personal reactions rather than a full-scale investigation of every item in every paper, Pierce supplied the following composite picture of the “best” Texas newspaper.

COVERAGE OF NATIONAL AND INTERNATIONAL NEWS: The Houston Chronicle

The Chronicle was Pierce’s choice because its editors and writers demonstrated they selected, placed, and published news analysis and interpretive reporting of national and international events with an eye to the reader’s understanding. Also, a hearty amount of space was devoted to this kind of news and the stories were placed appropriately in balance with news of other events of the day.

Pierce based this decision based on the quality of news coverage, the amount of news analysis, and probing beyond the routine press release.

Newspapers were rated for research demonstrated and the quality of writing, not for the opinion s expressed.

Pierce says that non-traditionalists might prefer the bold magazine style of the Fort Worth Press. He bases his “traditionalist” chouce on readability, clarity, and organization.

COVERAGE OF CULTURAL NEWS: A toss-up between the Dallas Morning News and the Dallas Times Herald.

Pierce made this selection on the amount of space given to music, drama, and books and well as television and film reporting. However, he rated the Dallas papers 4 to 6 in a rating of 1 to 10, noting he was not overly impressed with their work in this catagory.

COVERAGE OF BUSINESS NEWS: None

Pierce’s notes: Uniformly poor. Texans ought to subscribe to the Wall Street Journal. He was looking for service stories like trend-charting and interpretations of what is happening, and saw “damn little” of such work.

COVERAGE OF LOCAL NEWS: None

A leader inthis category would be moving aggressively ito its city’s neighborhoods, reporting on city life, defining trends like population growth, and going far beyond what Pierce calls “press release” stories—”news” announced by a local industry—or easily gathered stories from the local fire department and off the police blotter. It is a question of enterprise and Pierce reported he found few conspicuous signs of such initiative. He also noted that this kind of news-gathering is expensive in terms of staff, staff time, and space. “Perhaps this explains the gap in quality and quantity,” he wrote.

COVERAGE OF CONSUMER NEWS: None

The Fort Worth Star-Telegram, The Houston Chronicle, and The Dallas Morning News seem to be trying, but none seems to be outstanding in this category. This category is also an umbrella for transitory women’s sections. Pierce was looking for aggressive and imaginative work that serves consumers. Inflation versus the advertiser’s interest is usually a double-bind here and the expense of space, staff time, research, and enterprise is a problem for publishers and editors.

COVERAGE OF SPORTS: None

Pierce, being a non-sports buff, felt unable to judge this category so Texas Monthly’s sports and contest editor Paul Burka took the torch. His decision: None. He found a few good sportswriters, primarily with the Dallas papers, but no noteworthy sports page. Too many rewritten press releases and cheers for hometown heroes and not enough attention to the political, economic, and social side of sports, Burka scolds.

Pierce: “If Texas newspapers devoted one-half of the time, space, and staff they devote to sports to business, news, and consumer stories, they’d be better newspapers.

If you feel inclined to scissor-and-paste together a perfect composite newspaper, based on the observations of Pierce with Burka on sports, you will have a newspaper that includes national and international news, state news, game scores, editorial opinion, some cultural tone, and it will be easy on your eye.

However, it won’t tell you about what is truly happening around you and your neighbors and how you might ease the strain on your pocketbook now and in the future.