As Jim McBride of the Amarillo Globe-News wrote, the 74 year-old Amarilloan turned himself in Wednesday after 11 second-degree felony charges–six counts of “child sexual abuse” and five counts of “sexual performance by a child”–were filed against him.

Marsh 3, who suffered a series of strokes last year and is under the legal guardianship of his wife Wendy, was brought to the Potter County Detention Center by his wife and lawyers, then released on bonds totalling $300,000.

The Amarillo millionaire and iconoclastic “Cadillac Ranch” artist/prankster is already the defendant in a string of civil lawsuits alleging the same sort of activity. The first of two that were filed in late October called Marsh 3:

a serial abuser of boys and young men…Marsh 3 has been known to take in troubled young men, particularly ones with artistic talents, under a so-called ‘mentorship’ program.

Since then, the number of civil suits has grown to six, involving a total of 10 teens, and Lubbock County district attorney Matthew D. Powell has been appointed special prosecutor for the criminal investigation. According to Emily Griffin of Newschannel 10, Potter County D.A. Randall Sims “has recused himself as a possible witness” in the case.

Meanwhile, on November 14, a Potter County judge ruled that Marsh 3 was incapacitated. Marsh’s wife and two of his companies have filed a motion asking that Marsh 3 not be included in the civil lawsuits due to his condition.

…the teens in the civil cases waited until Marsh suffered a massive stroke last year to move forward with a plan ‘to become multimillionaires’ by signing with a Houston personal injury attorney.

The criminal case against Marsh 3 will now go to a grand jury. “This is the beginning of the process,” Powell told the AP’s Blaney.

As McBride and Aziza Musa of the Globe-News have recounted, Marsh 3 has previously faced similar indecency or sexual conduct charges well over a decade ago, but they were all dismissed or settled. He also pled no contest to charges of unlawful restraint and criminal trespass stemming from the infamous 1996 incident in which Marsh 3 locked up 18 year-old Ben Whittenburg in a chicken coop for stealing a sign that was part of one of Marsh 3’s art projects.

At the time, the Whittenburg family also alleged that Marsh 3 was engaged in sexual impropriety.

“I want Stanley Marsh removed as a factor in the lives of young people in Amarillo, especially teenage boys,” George Whittenburg, Ben’s father, said in Skip Hollandsworth’s March, 1996 Texas Monthly cover story. “For too long, people have been afraid of taking on Stanley Marsh because of his immense wealth and power. Well, it’s time for the truth to come out.”

Former Amarillo mayor and current Republican state senator Kel Seliger took an evenhanded tone discussing Marsh (prior to the filing of the criminal charges) in a November 21 story by Manny Fernandez of the New York Times. “One should always take allegations of indecency with a child seriously. But at this point they are just that, they’re allegations,” Seliger said.

“In Amarillo, the  question has always been–even when I wrote my story–whether Marsh was a true eccentric, or whether he was seriously disturbed,” Texas Monthly‘s Hollandsworth said Thursday morning. “When I wrote the story, the lone voice against Marsh was Whittenburg. I guess we’re about to find out if he was right all along about Marsh’s abuse of boys–and whether a lot of people in Amarillo turned their backs on what they knew Marsh was doing.” 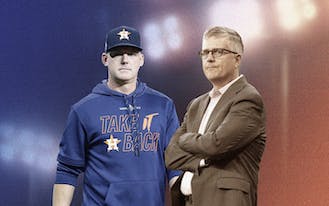