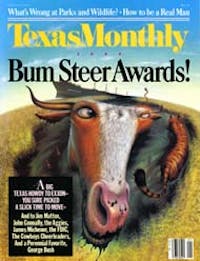 Early Texans thirsted to move west, yet the thorns, sand, and heat of the West Texas wasteland kept them at bay. Because there was too little water, traveling—much less settling down—was well-nigh impossible, and worse, a new encumbrance called barbed wire barred most farmers and ranchers from the few existing trickles of creek. Unbeknownst to them, the Ogallala and Edwards aquifers lay in cool promise a hundred feet underground, waiting for discovery.

Enter the windmill. By tapping West Texas’ hidden resources, the wind-activated water pump opened up for small-scale farming and ranching a good half of Texas once thought uninhabitable. On the heels of civilization came diversification, as the windmill and its successor, the electric pump, allowed ranchers to increase the size of their herds and farmers to expand from dryland crops to irrigated ones like corn.

In age the windmill is a piker next to an aquifer, yet the windmill has existed for more than a thousand years. Today’s classic sunflower shape appeared only in 1854, created by Daniel Halladay, a Connecticut mechanic. When Halladay discovered that there wasn’t a market in the Northeast for his sturdy, self-regulating pump, he headed to Chicago, where the burgeoning railroad industry realized its value: The windmill could enable steam locomotives to cross the dauntingly dry Great Plains. Dozens of manufacturers jumped in on the act, producing oddities like an umbrella mill that furled its slats protectively when the wind became too fierce and decorator mills with elaborate gingerbread, fancy paint jobs, and wrought-iron froufrou. But only Aermotor, 101 years old, is well known today. In 1986 the company bowed to the inevitable and moved to Texas, its major market. Its San Angelo factory produces a thousand or so every year.

A windmill works this way: A breeze spins the slats of the wheel, which moves a shaft; the shaft in turn moves gears connected to a guide wheel; that moves a rod up and down, drawing water into an adjacent tank (so called—usually the tank is just an earthen pond). Look closely, and you can see the moving rod, the on-off lever, the ever-present bullet holes in the vane or tail, and possibly a tin cup hanging on a nail to serve a passing cowboy.

In ranching lore, the care and maintenance of a windmill occupied a place of aversion usually reserved for scorpions and rattlesnakes. Cowboys especially hated the weekly chore of greasing the gears, which required climbing a creaky, swaying tower and perching on a platform the size of a card table. At the XIT Ranch’s Yellow House Division in Lamb County stood a windmill 132 feet tall—built to crest a canyon’s rim. XIT wives offered free cooking and washing to anyone who would take their husband’s turns. J. B. Buchanan, of Hutchinson County, tells of one hand who hated heights but finally screwed up the courage to climb his boss’s windmill. Once up, he saw the clouds rushing by in the wind, thought the tower was falling, and jumped off into the stock tank. “Stove him up for the rest of his life,” Buchanan allowed.

Buchanan is the Windmill Man. He has a baker’s dozen, all different, on his land near Stinnett, and at 83 he can still shinny up one in a trice. A former oil-field worker and wheat farmer, Buchanan started hunting antique windmills in 1965. His first, a 1915 Eclipse, he found unopened in its original crate in a general store near Santa Rosa, New Mexico. The Smithsonian Institution caught wind of his find and asked if he would donate it. “I told them I’d pret’ near let ’em have my wife as that windmill,” he recalled. But he agreed, and the museum dispatched a flatbed truck to collect every nail and splinter. The museum placed the Eclipse in its American History collection, next to a placard reading, “No woman should live in this country who cannot climb a windmill or shoot a gun.”

Ironically, the history of the windmill may be coming full circle. America’s westward-ho philosophy held sway with such a vengeance that now, a mere century since the invention of the Aermotor, the water table in Texas is severely depleted. Aquifers that took millenia to form are threatened with extinction; the Ogallala, for example, which is 70 million years old, provides billions of gallons of water a year to Panhandle farmers and receives only a quarter inch of rainfall in return. When there is no more water, there will be no more windmills, and half of Texas may revert to dryness and desolation. What a waste.