This pandemic holiday, when there’ll be no parties for hosting (though, with any luck, we’ll still have marshmallows for toasting), will you still deck your halls with boughs of holly and don your gay apparel? And what kind of yuletide treasures are you giving or hoping to get this year? During the final days of 2020, we’re ready to hail the new, ye lads and lasses, so we asked some friends of Texas Monthly how they’re celebrating differently this year. They all have a few wonderful things in common: there will still be holiday greetings and happy (virtual) meetings. In lieu of caroling out in the snow, they recommend some festive tunes for rockin’ around the Christmas tree at home. And a few have some great ideas for what to give to the stragglers on your Nice List.

“I really do enjoy the Christmas holidays,” says the legendary Snow’s BBQ pitmaster (and Netflix star) Tootsie Tomanetz, who turned 85 this year. And she loves it all: seeing yard decorations and the Nativity scene at church, feeling the joy of the season, hearing “Silent Night” and the occasional “I Want a Hippopotamus for Christmas.” But one jolly aspect stands out most: the ephemeral lights.

“I can remember our first Christmas trees with candles that were clipped on with little metal clips, and the tree only went up maybe Christmas Eve,” she says. “We only lit the candles a very short time at night to enjoy the light on them because the tree would get dry, and you would have a house fire if you got careless. So when we got electricity and could have a Christmas tree with electric lights on, it was real astonishing. I mean it was beautiful. It was so much prettier.” But even then, in the early forties, the lights stayed on for only a little while at a time: “The flat rate for electricity at that time was $1.25 a month, so you know, we saved our electricity!”

Whether your lights are on for a little or a lot this year, may they make your season bright. And if you’re setting out to see holiday lights around Texas—when she was a teenager, Tootsie says her parents would drive the family to Austin to see them strung up along Congress Avenue and adorning the Capitol—here’s where to go this year.

“I normally see family at both Thanksgiving and Christmas,” Dallas fashion designer Venny Etienne says. “This year, we will try and FaceTime or Zoom for Christmas as we open our gifts.” Like many Texans, his holiday season is looking a little different this year, but a few of his favorite traditions will stay the same.

What He’s Listening To: The Classic Christmas Album by Luther Vandross.

A Gift He Plans to Give: Someone on his list (and he’s not saying who!) will receive a Samsung sound bar.

A Gift He Hopes to Get: Venny remembers the best present he ever received was “a Mongoose bike when I was eight. I thought I was the baddest kid on the block.” This year, he’s dreaming of an iRobot vacuum.

What He’s Cooking: “My famous and irresistible mac and cheese!” A friend sent him the his favorite recipe about ten years ago, and he’s been making it ever since.

Learn more about Venny’s latest fashion collection, inspired by a jacket worn by Beyoncé in Black Is King.

Earlier this year, we turned to Texan country musician Charley Crockett for new songs about tough times: he released a new album titled Welcome to Hard Times in July and performed in our music series the following month. This month, we’re flipping the script: “What is the best gift you ever received?” we asked. “I’d say meeting my sweetheart, Taylor Grace, on New Year’s Day at the White Horse Saloon.” (She’s the beauty in red in the video for his song “Don’t Cry.”) Here’s what he’s planning for the holidays this year—his first season without nonstop shows.

Favorite Part of the Season:  “The eggnog I buy but never drink.”

A Gift He Hopes to Get: “I’d like to buy myself a little ranch and a couple horses.”

A Gift He Plans to Give: “I promised my friend James Hand I’d record his songs just before he passed away. I aim to keep that promise.”

What He’s Listening To: “I stay lost in the golden era of country and blues.”

What He’s Making in the Kitchen: “A bunch of dang mistakes.”

As an in-demand yoga teacher and founder of the Melanin Yoga Project, Davina Davidson is usually busy in the studio over the holidays. “It’s been many years since my whole family has celebrated together, and this year we will all be in the same space,” she says, referring to her quarantine pod. “I normally teach yoga on Christmas; however, this year I will not be teaching publicly. I may just round my family up and have them be my students!” Here’s how the Houstonian is celebrating the season:

A Gift She Hopes to Get: “Rest and peace of mind. I will be on a sabbatical for the month of December, and I am hopeful that my team feels empowered and confident to step in and lead while I am away.”

A Gift She Plans to Give: “Given that many yoga teachers have been out of jobs or have reduced schedules, I plan to give away some of my branded yoga goodies and a scholarship to my three-hundred-hour yoga teacher training.”

What She’s Listening To: “I love old gospel songs and tend to listen to Tamela Mann, Fred Hammond, and Hezekiah Walker. If my sister gets to play DJ at any point, I will be listening to Mariah Carey’s Christmas album.”

What She’s Cooking: Mashed sweet potatoes. “They have a secret ingredient that keeps the family wondering!” But she won’t tell us what it is. (Any guesses?)

Learn more about the nonprofit leader and her work.

“My brother-in-law is a pastor in Lubbock,” the beekeeper and TikTok star Erika Thompson says. “Since Christmas is a busy time for him and he can’t travel, my parents and I go to my sister and brother-in-law’s house. We go to church, then we come home and make homemade pasta and have a gingerbread house building competition.” This year, though, she’s embracing the pandemic’s push to form new traditions—a fitting endeavor for the newlywed.

What She’s Listening To: “Lyle Lovett’s Songs for the Season. This album has three songs on it, which is the perfect amount of Christmas music for me.”

What She’s Making: “Beer bread. I got married in October in a scaled-down, pandemic-size wedding, and we had a lot of leftover beer.” Her recipe, which yields one slightly sweet loaf, is from her brother-in-law. “Stir together a 12-ounce beer, 3 cups of self-rising flour, and ½ cup of sugar. The dough will be sticky. Bake in a greased loaf pan at 350 degrees for 50 minutes. Spread 2 tablespoons of melted butter on the top and bake for 5 more minutes until the top is golden brown.” And you guessed it: she enjoys hers with a drizzle of honey.

Her Favorite Gift Ever: “After years of asking my parents for a dog, when I was nine years old I got a Dalmatian puppy named Zoë. Zoë and I were together for sixteen years. She really shaped my relationship with animals.”

On Her List This Year: “Seeds, trees, and anything I can plant on my property that provides food for bees, which is the best thing that anyone can do to help the bee population.”

Need a gift for the gardener on your list? Erika recommends referring to Texas A&M’s guide to bee-friendly plants or stopping by a garden center and taking cues from the bees. “Look at which plants they’re feeding from and let the bees tell you what they like and what to buy.” 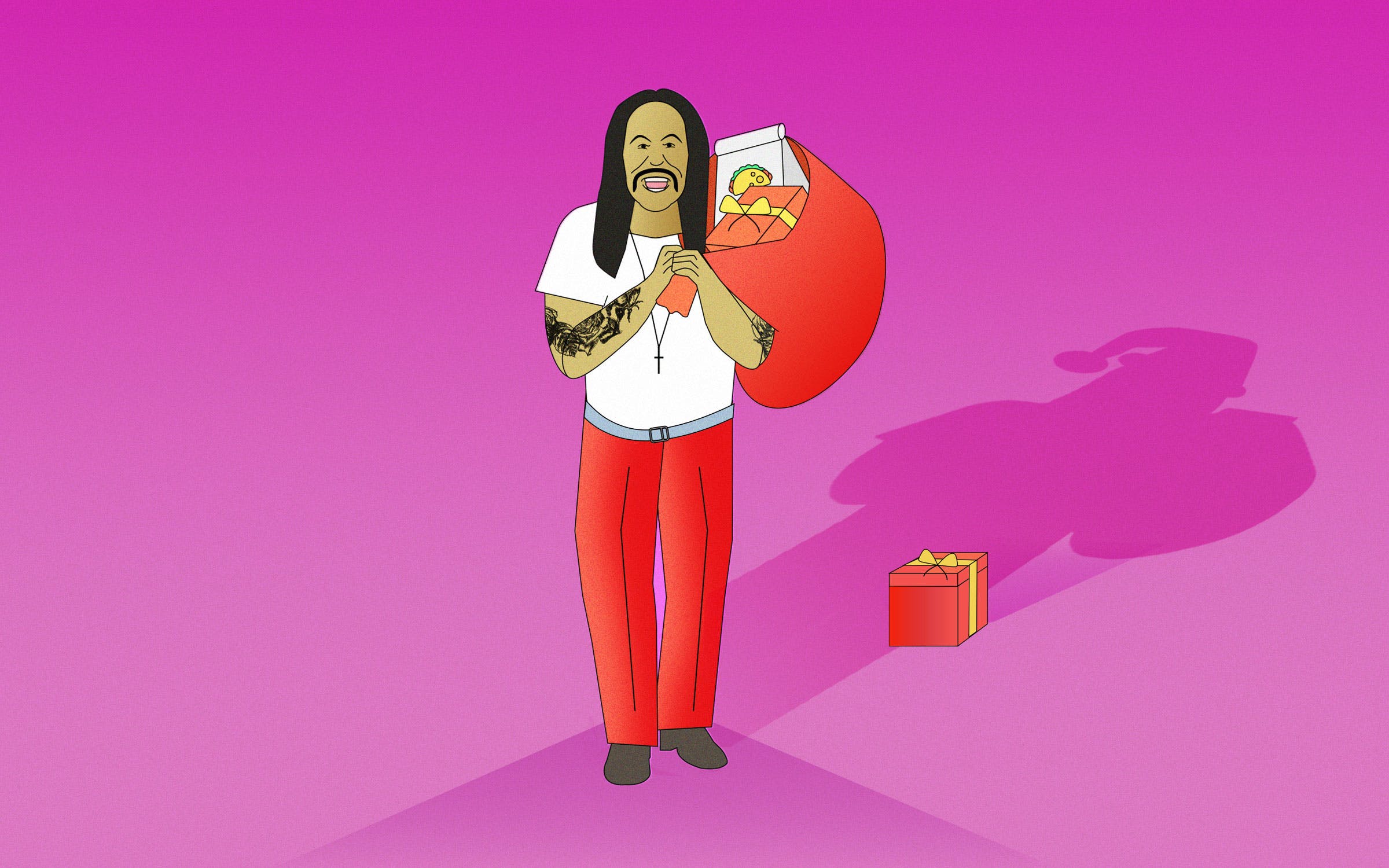 If you can judge a man’s Christmas spirit by his business endeavors, Danny Trejo is full of holiday cheer: the actor released his first limited-edition ugly Christmas sweater for Trejo’s Tacos this year, complete with his own mug stitched into the design. He told us he’s keeping spirits high at home by serving Trejo’s Tacos to loved ones throughout the season, too. Here’s what else he’s looking forward to:

A Gift He Hopes to Get: “The gift of being surrounded by the ones I love.”

A Gift He Plans to Give: “I’m celebrating from home. I’m blessed, so I’m doing my best to help those that need it most and in the safest way possible,” he says. “I plan on giving clothing, food, and much more!”

What He’s Listening To: “Christmas carols. All the top Christmas songs you can think of.”

Learn more about Danny, who built a decades-long film career after prison.