Ever had a “small end” rib sandwich? Do you know what your local barbecue joint charges for an order of “regulars”? Have you ever ordered a Styrofoam container of “breaks”?

If you’re confused about the paragraph above, it’s probably because you’ve been eating in the land of coarse black pepper and unsweet tea—in other words, barbecue joints owned mostly by white pitmasters who focus on brisket. These Central Texas establishments have become the dominant force of the state’s barbecue culture and the de facto style to judge against when determining another joint’s quality, but not all Texas barbecue aspires to the same tastes. Customers who frequent black-owned barbecue joints, especially in cities, often have different plate priorities: ribs are favored over sliced brisket, and the selection of cakes wrapped in cellophane near the cash register tempts a sweet tooth more than a cobbler’s seasonal fruit does.

At these restaurants, there’s also a different lingo used for some of the cuts you thought you knew everything about. “Fatty” and “lean” are just the beginning when describing cuts of brisket, and the rib sandwich definitely has bones. I talked with the owners of three places I’ve recently reviewed—Ray’s BBQ Shack and Burns BBQ, both in Houston, and Hardeman’s BBQ, in Dallas—to provide some insight on the language of African American Texas barbecue, which is such an important part of our state’s culture and often overlooked.

Regulars, short for “irregulars,” are all the end cuts of the ribs, including the two rib bones on each end of the rack. They include any piece of the rib rack that’s too crunchy or dried out to serve. Gary Burns of Burns BBQ told me: “You used to go into black barbecue joints and ask for regulars—ask for the morning’s batch—and they’d put it into a paper bag for, say, $5.” Ray Busch goes through lots of ribs, and he sells his regulars for $15 per gallon-sized bag—but don’t come asking too early. To accumulate the trimmings, the barbecue joint needs to have already sold quite a bit of ribs, so it’s best to come in right after a rush. Steve Burns said “regulars” originated in a time when barbecue was cooked more dry, so the end cuts ended up more like rib jerky. “You couldn’t cook barbecue with a red color or light coating [of smoke],” he said. “Folks wanted their barbecue cooked well done. If you’re getting a bag of regulars, it might be dry or whatever, but it would [have] some good seasoning in it.”  Today they’re the ultimate in cheap barbecue eats and allow the pitmasters to get a little something for their trimmings.

Breaks are regulars, plus a little more. George Hardeman Jr. explained that they are “all the ends of everything that we can’t use on a regular order.” That means brisket burnt ends, link ends, rib ends, and tips. “We used to be open until four in the morning,” Hardeman said of the restaurant’s old location. “People would come in looking for breaks, ‘and make them extra hot.’” (If it’s a little dry, it’ll last longer.) “It’s like barbecue cracklins,” Hardeman said. There are regional differences: Ray Busch said this term isn’t recognized in Houston. “I have a friend from Dallas who asks for breaks,” Busch said, “but I keep telling him that they’re called regulars in Houston.”

Not to be confused with breaks or regulars, rib tips are the prized ends of the spare ribs. Ray Busch orders them as a separate cut to smoke and serve as rib tips on the menu—otherwise he’d have to harvest them from the spare ribs. That won’t work because his customers “like the whole spare rib” and don’t want St. Louis cut ribs. The cut Busch orders and smokes is called the brisket bone. “I am the first one that got those anywhere in Houston,” Busch bragged. He said he worked at the sheriff’s department (while cooking barbecue on the side) with a woman from Chicago. “She was always asking for rib tips,” Busch said, but he didn’t know exactly what she meant. “One day, I was driving in my patrol car,” Busch continued, “and I saw this guy in a U-Haul with a pit behind him. I gave him some directions and followed him to make sure he got to his destination safely.” He got out of his truck, and he had a shirt on that said ‘Chicago style rib tips.'” Busch told him, “I’ve been looking for you,” and he got the lowdown on how to order and smoke rib tips.

The tip of a rib has some gristle in it but no bones. Busch said if you cook it right, “it can be so tender that it’s edible. Some people like that more than they like the actual rib.” The tips are cut into small strips for serving, with the gristle fully visible. That’s why Steve Burns says folks still come into Burns BBQ asking for “gristles” or “gristle tips” to get an order of rib tips.

Small end ribs, the most expensive item on the menu, are for those averse to rib tips. There are only about four or five short end ribs per rack. Hardeman explains which ribs they are. “If you’re looking at a slab of ribs, the heavy side is the brisket side. When you come down into the front where it narrows out, and the bones are smaller, those are small end ribs,” he said. “It’s mostly meat.” An order of ribs for $17 per pound at Hardeman’s BBQ will come with long end ribs, short end ribs, and the rib tips. An order of short end ribs for $19 per pound (there’s just a $1 difference between the two at Burns BBQ) would be just the meatiest ones on the rack.

To make a rib sandwich, “you take the ribs and put it on the bread,” said Gary Burns. “The bread is there for when you’re eating the bone and sopping the sauce and eating the meat around the bone,” Burns added. “It’s a culture thing,” Cory Crawford said of the most popular item on the menu at Burns BBQ. “We always ate it. It was like a peanut butter and jelly sandwich,” he explained, while adding, “you don’t really eat it like a Big Mac.” At Hardeman’s BBQ, a rib sandwich order will get you five bones, or about a third a pound of ribs, bread, pickles, and onions. I asked Hardeman if any customers had ever tried to take a bite out of the rib sandwich. “Nope,” he said. “They all know this isn’t some McRib.”

A loose cut is a Houston term for fatty brisket, according to Ray Busch. He swears “that’s where all the flavor is.”

A high top is the fattiest of the fatty brisket. It’s the top portion, or the peak of the brisket. If you remove the high top (which includes the fat cap), the slices beneath are called “moist-lean.” When you get into the lean side, especially after the fat cap is removed, Steve Burns said they used to call that “veal.” It’s a term you can still find on the menu at Pappa’s Bar-B-Q (not to be confused with the Pappas chain) in South Houston.

Sausage and links are two different things. They’re both on the menu at Ray’s BBQ Shack, and Ray says, “Links are round, and they’re all beef with a beef casing.” That’s not a hard and fast definition statewide, but the link is a shape that’s certainly not a rope of sausage. Hardeman said a link is always spicier than a sausage.

Speaking of spicy, another signature of a black-owned barbecue joint is that the hot barbecue sauce is not to be taken lightly. And no matter which sauce you ask for, you better expect that the sauce will be ladled over the top of the meat before you get it. If it’s spicy, remember that it’s not some of the regular sauce with a little hot sauce thrown in. “Eat at your own risk,” Hardeman warned, because the cayenne hits like a brick—after all, it’s the most common pepper found in the pantry. All that cracked black pepper is for predominantly white-owned Central Texas barbecue joints where the spare ribs are speckled with the stuff, and the briskets are coated in it. At Hardeman’s they don’t use black pepper anywhere. It’s on the brisket at Ray’s, but only because Herb Taylor, a young co-owner at Ray’s, persuaded him to make the change recently.

One difference in black-owned barbecue joints is almost expected, and that’s the home-cooked sides. The hot sides go way beyond pinto beans and might include yams, greens, cabbage, and cheesy broccoli rice. And don’t be surprised if you get the option of cornbread instead of white bread. Expect a little sugar shock from the sweet tea at a black-owned barbecue joint. Kool-Aid is another drink option you might find, and as Hardeman explained, “Tropical Punch flavor is the standard.”

For dessert, there will be cake. They’re usually stacked up by the register, either in plastic clamshells or wrapped in cellophane. Double layer chocolate and lemon are common, but the favorite is strawberry cake, according to Hardeman. It’s deep pink in color, with a flavor only reminiscent of fruit. I’m partial to a good 7-Up bundt cake, like the one at Berry Best BBQ, in Watauga, myself.

Barbecue lingo changes in every barbecue region in the country, and even within Texas. Don’t let ignorance be your excuse to miss out on a good order of breaks or rib tip Saturday at a spot like Fargo’s Pit BBQ in Bryan—and may you never attempt to eat a rib sandwich like a sandwich. 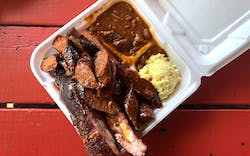 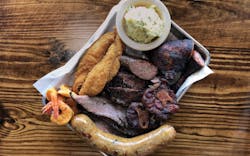 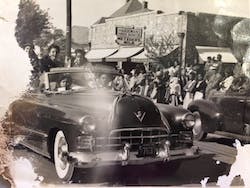 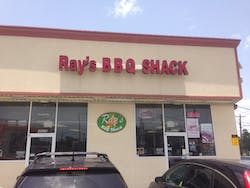