This joint is a family affair run by the tight-lipped Bob Allen, his wife, and son. A steel wood-fired pit was hidden by a fence, and they weren’t willing to give us a tour. Bob assured us that “there’s no gas up on this hill.” It’s all hickory that runs these pits. I took my order to the far end of the dining room to see just what these mystery pits might produce. 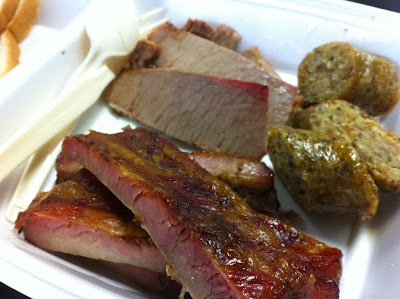 Ribs were thin and on the dry side, but not too much so. The subtle seasoning did little to hide the smoky flavor of the tender meat. The hot boudain lived up to its name with plenty of spice and good snappy casing. The last cut I tried was the brisket. It was sad uniform rectangles of gray beef with all of the fat and crust cut away. When I bit into it I was surprised by the moist meat and the hint of smoke that remained. Maybe they were holding out on me. I walked back to the counter and asked for some dark and crusty end cuts. They were happy to oblige and what I got was much improved. The fat had melted into the subtle salt rub like meat candy, and the deep black crust was smoky and crackled a bit in my teeth. I had to ask Bob why he wasn’t serving this stuff to begin with, and he said the customers expect ultra-lean beef, so he gives it to him. The difference between these two briskets was incredible, and I was sad to know that the majority of people prefer the first version. Now that I knew how to order the brisket here, I grabbed a couple of pounds to go. Some friends in Nacogdoches were going to be very happy.