In the middle of this Wednesday’s lunch hour nearly 16,000 people were watching a brisket smoke in real time on YouTube. Arby’s was re-airing their record-breaking thirteen-hour commercial that was first shown on a single television station in Duluth, Minnesota, over the Memorial Day weekend. They were promoting their Smokehouse Brisket Sandwich and at the same time proving it was smoked for the promised—and much ballyhooed—thirteen hours.

The commercial was a slam-dunk success. The size of the viewing audience became irrelevant once Arby’s caught the attention of the New York Times, Adweek, Slate, and Eater with their clever stunt. Before you knew it the #BrisketIsBack hashtag, which @Arbys created, was tending on twitter. The low-and-slow marketing method got them all the publicity they could have hoped for, but something was lost in all the hubbub. That brisket was one of several thousand that Arby’s would go through in their 3,354 stores across the country that day. This sandwich was creating waves across the Internet, but its re-introduction onto Arby’s menu had already created a ripple effect in the country’s beef market.

Check the 0:58 mark for a report on surging brisket prices

Last month I wrote about the volatility of beef prices, and especially the skyrocketing cost of brisket [Brisket Ain’t Cheap], but the only thing I had to blame then was a drastically depleted cattle population. On the same day that column was published, market analyst Gary Morrison at Urner Barry, a reporting service on commodity food markets, identified another cause:

A major QSR [Arby’s] tested a smokehouse brisket sandwich in late 2013, and called it the most successful new product in company history. They plan on bringing it back sometime in mid-to-late 2014. As a result, they have been stepping into the market to procure product hampering an already tight market. Prices have pushed to new highs on almost a daily basis.

As Morrison explained to me in a phone conversation, the “tight” market is due to the confluence of a few events. First, the Cattle on Feed report from the first of the year put the U.S. cattle population at its lowest since 1951. Big retailers start to ‘book’ their beef orders for the next six months right around that time, and the psychological affect of that news had them booking more aggressively than normal. Arby’s was no different. When big restaurants plan for a special menu item, like Arby’s with its brisket sandwich, they’ll ‘book’ or reserve truckloads of future briskets with their suppliers. In this case, Arby’s was reserving massive quantities of brisket in anticipation of this month’s big relaunch. “When they book they’re not worried about price, they’re worried about having the available product,” said Morrison.

One factor not to be ignored is the growing popularity of Texas style barbecue across the country. Folks from California to New York are eating more brisket now than they were even last year. Beef prices are going up across the board, but the level that briskets have risen to are unlike any other beef cut. As of last week the average price for Choice beef had risen ten percent over the same week last year while the cost of briskets shot up 44 percent. Part of the problem is that it’s not like ground beef that can come from a multitude of beef cuts. There are only two briskets per animal.

So how much brisket does Arby’s need to meet the demand of their “most successful new product in company history?” Based on my estimates, they need about a half million pounds of raw brisket per week*, and that’s just to match last year’s sales of the Smokehouse Brisket Sandwich during its first limited release. To put that into perspective, you’d have to open 175 Kreuz Markets simultaneously to match Arby’s appetite for brisket. Given their concerted marketing effort over the last few weeks, its likely they’re selling even more now, but Arby’s hasn’t released those numbers yet. 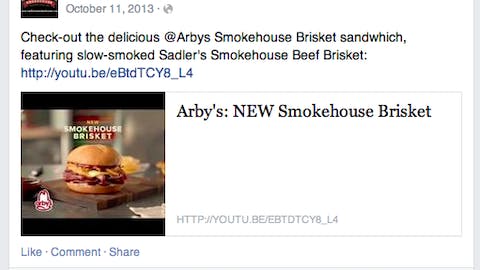 Arby’s smoked brisket supplier is also mum. I reached out to Sadler’s Smokehouse in Henderson, Texas, who smokes all those briskets, but they offered no comment. Sadler’s has been smoking briskets in their 300,000-square-foot East Texas processing facility since 1984, and you may have seen their pre-sliced briskets on the shelves at Wal-Mart or Sam’s Club. Their meat is actually pretty decent when compared to other pre-cooked supermarket briskets, and the sandwich that Arby’s makes from it isn’t as bad as some I’ve had at joints claiming to serve authentic barbecue in Texas [see more about the sandwich in Fast Food BBQ]. But this isn’t a sandwich review. I really wanted to know how much of the country’s brisket supplies are going to Sadler’s, then on to Arby’s.

Last month there were 62,674 steers and heifers slaughtered per day that graded at Select, Choice or Prime. These are the cattle producing briskets that would be sold whole to barbecue joints, grocery stores, and to Arby’s. If you estimate that the average raw, trimmed brisket weighs about twelve pounds, then Arby’s needs nearly 6,000 briskets or 3,000 head of cattle per day. That’s almost five percent of the total available supply. Five percent may not sound like much, but when you’re dealing with the entire supply of U.S. beef, that’s a huge number. Gary Morrison noted that “if cattle supplies stay low even a single digit percentage could probably be detrimental.”

The New York Times reported that the Smokehouse Brisket Sandwich promotion will be with us all summer. I just hope in the meantime that Texas barbecue joints can weather the price hike. I’d hate to imagine a #BringBrisketBack campaign across Texas once our local barbecue joints can’t afford to buy it anymore.

* In The National Provisioner, Arby’s reported that they sold 64 sandwiches per store (3,354 stores) per day last year. With three ounces of brisket in every sandwich, that makes 40,248 pounds/day and 281,736 pounds/week of cooked brisket. A conservative estimate of 43.2 percent loss** in briskets through trimming and cooking puts the raw brisket estimate at 496,014 pounds/week.

** A 2010 television profile of Arby’s supplier, Sadler’s Smokehouse, stated that they take in 51.1 million pounds of raw meat and have an output of 29 million pounds, for a loss of 43.2 percent.