Joe Cotten’s Barbecue was once the pride of Corpus Christi, or Robstown, to be more specific. Founded in 1947, the joint’s mesquite-smoked barbecue and their tomatoey sauce helped define the local style of smoked meats. The joint was legendary, and legends are hard to replace. Since it tragically burned to the ground five years ago, many have tried to fill the void, and plenty of family drama ensued around that effort.

After the decision was made not to immediately rebuild, George Gonzales took the first crack at bringing it back. He opened Mr. G’s BBQ (his daughter, Julie, now runs it), bringing in former Joe Cotten employee Jesse Peña and sausage maker Carlos Valenzuela. They used the same barbecue methods and made the signature sauce (I never had a chance to eat at the original Joe Cotten’s, so I’m not sure how well it compares). The sausage was a hit, but the rest needed work. The following year, a Cotten family member would take another shot at bringing back the family recipes.

Joe Cotten’s grandson Michael opened Cotten’s BBQ in Calallen, just north of Robstown, in 2012. It began as takeout only joint in a small strip center. Then, another fire struck. Michael said he got a call in the middle of the night, and his heart sank. “At first I thought it was a joke,” he told me. Then he got in his truck and drove to the site as quickly as he could, thinking, “Here we go again.” Fortunately for Cotten, the fire was contained in the burger place next door. Their tragedy became his gain when Cotten renovated the smoke-damaged space into his new dining room. 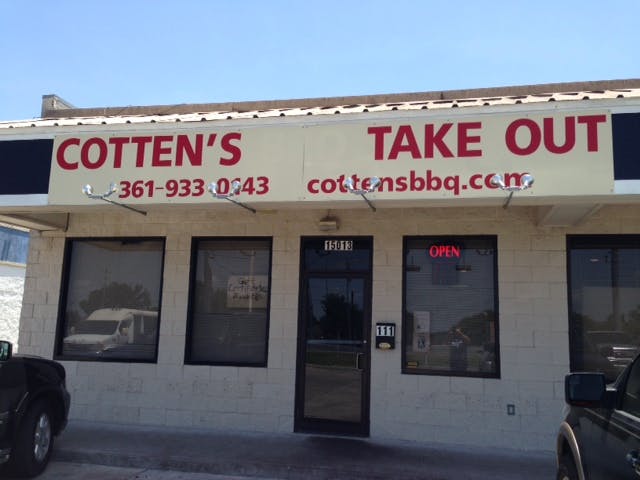 Another Cotten’s Barbecue in San Antonio, opened by Michael’s father Kenneth, was short-lived. But the Calallen location continued to draw lots of local attention, though some of it wasn’t the right kind. Michael’s uncle Cecil, who owned Joe Cotten’s Barbecue and also the rights to the Cotten barbecue name, sued him for trademark infringement. They finally settled late last year, and the name was changed to Mike Cotten’s Bar-B-Q. Since then, a second and much larger location has been added in Portland, just across the bridge from Corpus Christi.

The new location breaks from the strict adherence to the Joe Cotten menu, but there are plenty of familiar touches. “[In Calallen] we have our old clientele, and they like how it is, but I’m in a new market over here,” Michael explained. Customers still get their slice of onion, tomato, and pickle spear. An olive still comes on the potato salad, but there’s also mac & cheese, brisket nachos, and the de rigueur beef short rib, which Michael decided to add to the menu after trying versions at Black’s BBQ, Stiles Switch, and Pecan Lodge. The huge hunk of smoked beef was impressive, and the brisket was much better than my first visit to the Calallen location. 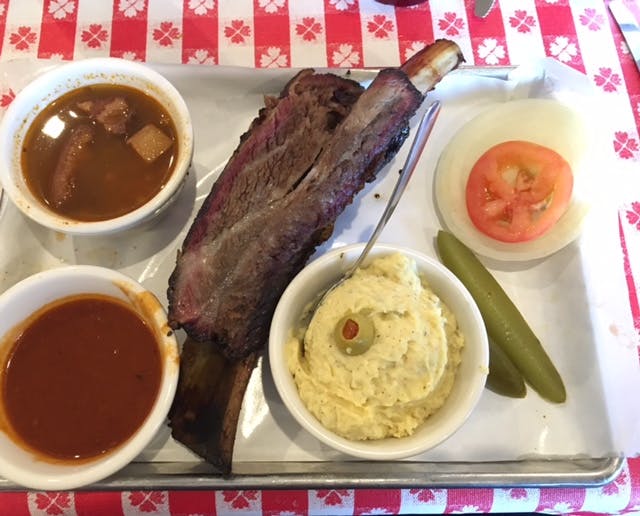 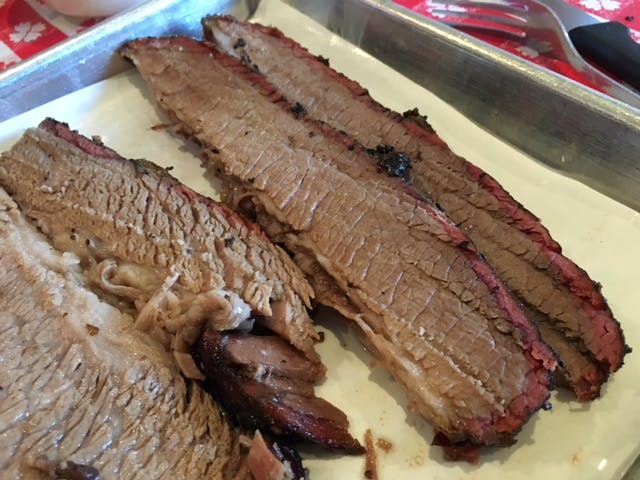 Improving the brisket has been a focus for Michael, even if it means veering away from mesquite wood and bringing in oak. “I prefer the oak,” Michael said of the month-old experiment (Calallen still uses mesquite). “It gives a better smoke ring and a better flavor,” he explained, while also noting that their beef now comes from Creekstone. The beef also spends more time resting after it comes out of the smoker for tenderness. Even the sauce has been updated. New customers in Portland aren’t necessarily familiar with the basic tomato-based sauce from the original Joe Cotten’s. Their expectations are different, which is why there are two sauces at Mike Cotten’s. Michael calls the original sauce “more of an acquired taste,” while the new one is “a little more tangy so it’s not all tomatoey.” It’s a tenuous balance between keeping a family tradition alive and making the changes required to improve the quality of the barbecue.

On the other side of the bay, Cecil Cotten may not have rebuilt yet, but plans are still in the works. He runs a catering operation called Cotten’s Barbecue Catering out of the kitchen at Mr. G’s BBQ. He hooked up with them a few months after they opened, but there are no plans to turn it into a Cotten’s Barbecue restaurant. Cecil endorses their cooking methods, but says the menu isn’t strict enough. “We only had three things and four ways to get it [at Joe Cotten’s],” he said. There was brisket, sausage, pork ribs, and sliced pork. Customers could ask for a plate, a sandwich, or an open-faced sandwich with any or all of the meats. “You had to special order chicken from the kitchen,” he told me.

The way it was is the only way for Cecil, but even he admits that the Cotten barbecue method has shifted over time. Even the genesis of his father’s barbecue prowess “was all by accident,” according to Cecil. The original joint opened as a beer spot and gambling hall. Men would come in after work, and Joe Cotten needed something to keep them there after the first beer. His answer was to start serving barbecue on butcher paper. “He’d cook mutton, chivos, and hindquarters [of beef]. Later came the brisket,” Cecil recalled. The beans took seven years to perfect, and the sauce took eight.

The sauce isn’t complicated, but Cecil didn’t want to divulge the exact recipe. “It’s a secret, but a lot of people know it,” he note, adding that a lawyer once jokingly asked him for the recipe while he was under oath. The beauty of the sauce is that it comes from leftovers. Onions, tomatoes, and pickled jalapeños were served with every plate. All the trimmings and any soggy peppers were culled out for the sauce, which also contained smoked beef drippings. Besides those ingredients, it also gets tomato juice, ketchup, Worcestershire sauce, yellow mustard, salt, pepper, and water. You just need to figure out the volume of each to crack the code. Cecil likes it so well that he claims, “I don’t care how good the barbecue is, I’ve gotta have sauce on it.”

I don’t see Cecil’s future spot having a second sauce recipe, but he did say he’d consider adding slaw and mac & cheese. Chicken might even make it to the menu as a Friday special. “You know how the Baptists are. They like chicken on Fridays,” he informed me. He also doesn’t mind using newer technology to cook the barbecue either. Joe Cotten started with brick pits fed by mesquite wood. He expanded to a huge walk-in pit stacked with shelves of meat. I’m still trying to figure out how any pitmaster would agree to tend a pit they had to walk into (Cecil says it was 275 degrees in there), but that eventually gave way to Southern Pride rotisseries which are a common thread throughout all the Cotten restaurant iterations.

An alliance with his nephew doesn’t seem to be a future option for Cecil. He wanted to make sure I understood that “They have no affiliation to me.” After five years, he maintains that a Joe Cotten’s Barbecue restaurant will return. “We’re looking for land between Robstown and Calallen,” he said, but there is no timetable. For now, he’s biding his time until his potential partner decides to pull the trigger. Until then you can enjoy the classic version of the Cotten barbecue legacy at Mr. G’s BBQ, where you might even run into Cecil. Or, if you have a hankering for a great beef rib, the new generation of Cotten family barbecue is right across the bridge in Portland. Either way, you’ll be able to taste a bit of South Texas barbecue history.