Abraham Franks got an early education in smoked meats growing up in Lockhart, the barbecue capital of Texas, but he set off to find his fortune in Las Vegas. After he moved there with his brother in the eighties to start a drywall and painting company, business went well for a while, but in 2002 the Franks felt the squeeze from larger competitors. The business suffered, and Abraham went from a six-figure salary to chasing hourly wage jobs. When he couldn’t keep up payments on two mortgages and several cars, Franks channeled his upbringing and tried his hand at barbecue to make extra money, but it wasn’t working. The stress mounted until it sent him to the hospital.

“They called it a stress attack,” Franks recalled from the conversation with doctors after he woke up on a gurney in 2002. He had been finishing up a barbecue pit in a friend’s garage when he felt faint. “I blinked a couple times, and whatever it was took me,” he said. Later, his friend told him he slid off his chair onto the floor after his fists clenched and his body tightened. At the hospital, Franks learned that his body had squeezed itself so tight that both shoulders were broken. He still has a screw in one shoulder to prove it.

His close scare only made him more resolved to try the barbecue business. “After that, my drive was still there,” said Franks, who finished his own barbecue pit after healing. The barbecue in Vegas wasn’t very good (and still isn’t), so he thought it might be his ticket to financial recovery. He did all the catering jobs he could find, but it wasn’t enough. “If you don’t know the right people there, get out quick,” Franks said of Vegas—both about the drywall and the barbecue business.

After his cousin, a North Texas pastor, urged him to come back to his home state in 2010, Franks shipped his smoker to Cedar Hill, a small town southwest of Dallas, and started catering for his cousin’s church. “Man, that’s some holy smoke,” his cousin told him, and the name stuck. In 2011, he opened Franks Holy Smoke BBQ in a car wash building. It sat at the bottom of the hill on the south end of Ovilla, a few miles south of Cedar Hill. It was a to-go-only operation, and Franks watched out the window as one barbecue joint after the next failed in the old general store at the top of the hill. In 2017 the landlord finally came down to the car wash to offer the place to Franks. He opened up with a new address in May of last year.

Growing up in Lockhart, Franks’s mom would cook barbecue in the oven for him and his three brothers. “Whenever [Dad] was home and he felt like it, he’d fire up the pit,” said Franks, who remembers his dad’s sauce fondly. “That’s what used to blow my mind.” That led him to develop a signature sauce recipe of his own for the restaurant. Franks started by doctoring commercial sauces, until he decided to just read the labels and start crafting his own versions. He now makes three sauces, including a spicy version and a sweet and tangy one that uses lemons, oranges, and pineapple juice for its sweetness. The original is so popular that he makes ten gallons every week.

I enjoyed the sweet sauce on the smoked half chicken. A huge, tender bird smoked over oak wood comes with two sides for just $12.45. I opted for some classic ranch beans and a crunchy slaw made with a thin mayo dressing heavy on apple cider vinegar. Both were better than the overly sweet mashed potato salad. I dipped alternating bites of chicken into each sauce. They’re all thick but not too sweet. The spicy version is coarse from all the dry spices added but not punishing. It goes well on the remarkably moist pulled pork sandwich and the chopped brisket. All the meats are chopped and/or pulled to order. My chopped brisket sandwich came wrapped in paper, and the bun glistened with fat. They use the brisket point, so request it lean if you don’t like that good fat.

Left: The smoked half chicken comes with two sides for just $12.45.

Spare ribs go on the pit with light seasoning. They get tender after a wrap in foil and come out looking a bit ragged. Unlike the Lockhart barbecue Franks grew up eating, these ribs were built for the sauce. Tear the meat off the bone and dip it, or squirt the sauce right on. An order comes with three ribs, one for each sauce. It’s the finishing touch they need, as Franks describes. “Your meat has to be good enough by itself to begin with, but you also need something to give it some enhancement if so desired,” he said. Those ribs pair well with a scoop of mac & cheese, baked with a layer of golden brown cheese on top.

The impressive stuffed baked potato needs no enhancement. It’s served in a plastic takeout container, offering is a strong hint that you won’t finish it. “The biggest one we’ve had was almost five pounds,” Franks said. I’m not sure how they make money on the three-meat potato I got for under $15. There had to have been two pounds of barbecue including brisket and two kinds of sausage.

Franks said his family leaned toward Black’s BBQ when growing up. He loved the chopped brisket and sausage there, but you’ll find another version of Lockhart sausage at the restaurant. Franks attended K-12 in Lockhart with Floyd Wilhelm of Chisholm Trail BBQ, which is where he gets his sausage now. It’s just as beefy and fatty as you’d expect from any ring of Lockhart sausage. I just wish it had been served in that iconic ring shape instead of already being sliced.

I talked to Franks while standing next to his barbecue pits parked behind the restaurant. He and his wife, Tonia (who keeps the books in order) had just returned from a fishing vacation, during which his pit hand, Patrick Lacy, took the reins. He said the trip was a success even if he caught only one fish, and he knew the restaurant was in good hands with Lacy and Franks’ daughter Rhonda, who slices the meat. “It was relaxing,” said Franks, who knows how important relaxation time is after his experience in Vegas. He’s now got himself a successful business in a permanent home surrounded by family, and that’s no small potatoes. 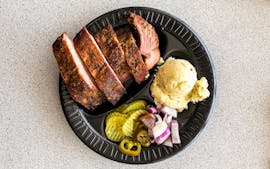 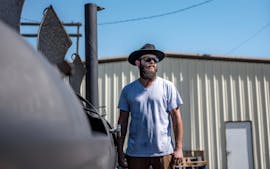 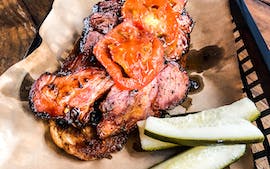