Chad Mudd came back to Krum to open a family-style home cooking restaurant. Then, a barbecue joint happened. It started this January when he reopened in the same space his previous restaurant occupied in the downtown strip of Krum some fifteen years ago. It started off as all chicken fried steak, chops, and fried chicken, but he wanted to play with his smoker on Mondays. Now, if Mudd’s is open, they’ve got barbecue, and it’s becoming a bigger part of the menu every week.

I stopped in earlier today for the Monday lunch special which is a refillable barbecue plate with sides and a drink for just $15. I asked for a little of all five – brisket, baby backs, turkey, pulled pork, and jalapeño sausage – and a slice of pie. The homemade pies are leftover from Saturday so there’s a limited selection, but they’re also just $2 a slice instead of the normal $5. With those prices, I got a twofer but couldn’t choose a favorite between the lemon cream and the buttermilk. 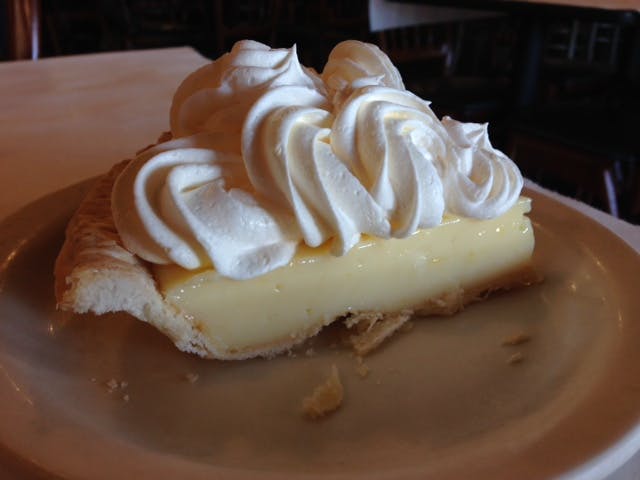 The smoked meat are served on a small cutting station near the kitchen. Mudd does the cutting. He’s just getting into the swing of things with barbecue, so a Monday lunch only requires three briskets. If he keeps it up, he’ll soon outgrown the cabinet-sized Ole Hickory smoker that sits under the exhaust hood in the kitchen.

The meats all get bathed in pecan smoke, so all have a mild but pleasant smoke flavor. A jet-black brisket was so glossy it sparkled under the light of the heat lamp. Its jiggle gave away the tender texture, and slices from both the point and the flat were juicy. Mudd says he still has a long way to go, but the brisket I had didn’t betray his beginner status. Doneness is the hardest thing to nail about brisket, and Mudd already has that down. With a little more salt, there would be little else to work on. 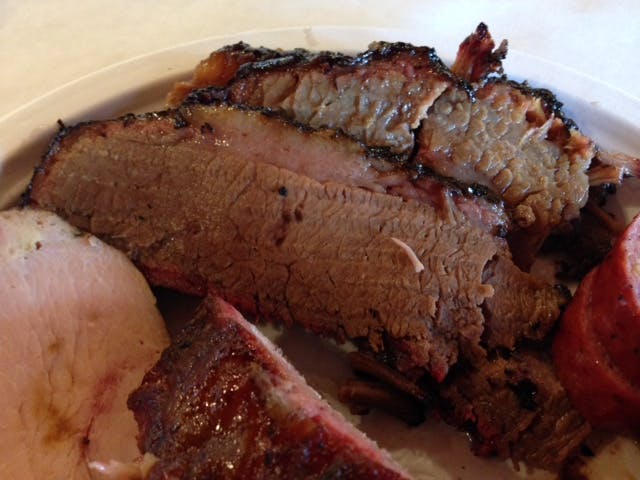 Mudd stressed the importance of serving fresh meat, and that’s what I got. Baby back ribs had a great texture, and went very well with the homemade sauce. Mudd says it took a while to get a sauce that he liked with all the meats. The one he settled on is thin with a little sweetness and some tart notes. It was needed for the pulled pork which is pulled ahead of time. Even ten minutes after opening it was already dry and stringy. Smoked turkey was still juicy and probably held the most smoke of any meat. A basic jalapeño/cheese sausage from Slovacek’s rounded out the meal. 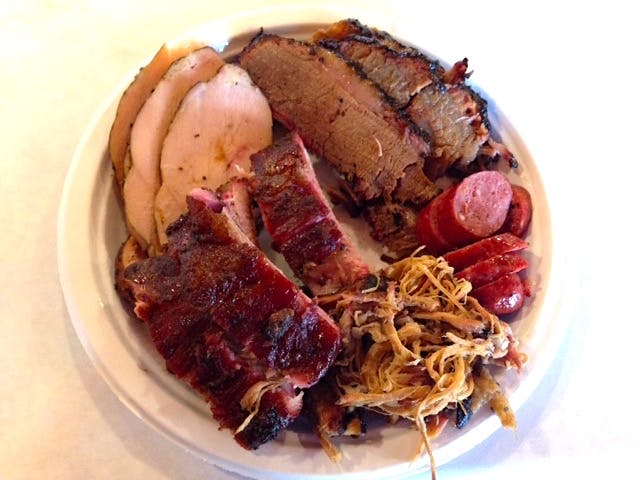 If you come for the Thursday-through-Saturday evening menu, the barbecue options are expanded and the home cooking menu is also available. Side options are more ample then too, but the peppery pinto beans and an eggy, mustard potato salad were good for lunch. The beans are homemade, but they fooled me on the potato salad. Although I would have guessed it was homemade, Mudd showed me a container of “Deviled Egg Potato Salad” from Stonewall Kitchens that he picked up at Sam’s Club. What can I say? It was good. The paprika flourish was the only homemade touch. 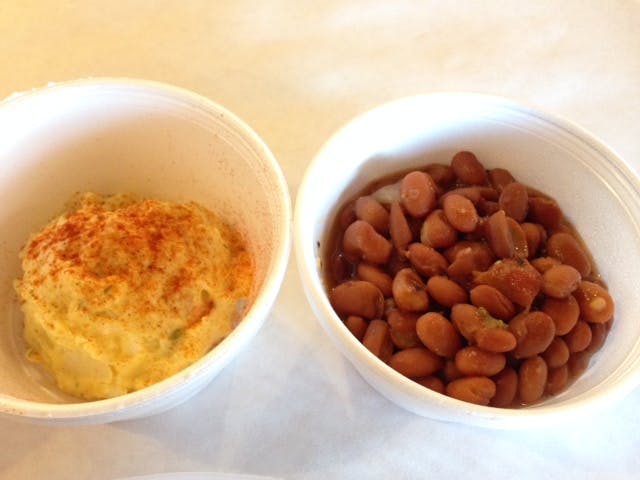 With the recent loss of Texas Smoke BBQ in Sanger, the addition of Mudd’s is an important one for barbecue lovers in rural Denton County. Even on a Monday just before the noon hour, business was steady. Although there are still limited hours, the quality of the barbecue is high and Mudd’s goal is to keep making more. I wouldn’t be surprised to see this place get too popular for just four services a week.