Smoked burgers have become a trend in Texas barbecue. We wrote about the first well-executed example back in 2016 when Lakewood Smokehouse in Dallas figured out that removing the patties from the smoker before they were fully cooked resulted in a juicier burger. Many have replicated those results, but Tejas Burger Joint in Tomball represents the first attempt to build a restaurant concept around smoked burgers.

Tejas Chocolate & Barbecue in Tomball has long been praised for its smoked meats that are as inventive as they are spectacular. We put them at number six in the state on our latest Top 50 list. Still, the joint on the outskirts of Houston struggled at times to attract customers throughout the week. Co-owner Scott Moore needed to develop a special on Wednesdays, and the Smokehouse Burger was born. It’s a smoked half-pound beef patty, seasoned liberally with salt and pepper, and topped with bacon, smoked cheddar, and onions grilled in beef tallow. It was a hit.

Early one Wednesday morning, before the barbecue joint opened, Scott was outside tending to one of his barbecue smokers. “The wind was just right, and it caught the smell from that flattop of the searing beef over the roof and down to the patio. I was like, ‘Holy moly,'” he remembered. Moore is used to the smell of smoke and black pepper and melted brisket fat, but this was a new aroma that rose above all the rest. It made his mouth water, and he thought it might have the same effect on others. While sitting at a red light, he noticed a new “for lease” sign in the window of a restaurant on Main Street in Tomball, and he felt drawn to a new vocation. “Noah, build the ark. Scott, cook burgers,” he said, jokingly characterizing the moment as a calling from God.

Moore, his partner Michelle Holland, and his brother Greg opened Tejas Burger Joint just last week. The Smokehouse Burger is one of the features, along with the Native Texan, which is a take on their chile relleno sausage. The sausage recipe was developed at the barbecue joint, and they nailed the mix on the first try. Its popularity has eclipsed that of nearly every other menu item, so Scott Moore wanted a burger that brought together the same ingredients. They mix the sausage spices into a beef patty, smoke it, grill it, then top it with pepper jack cheese, avocado seasoned with adobo spices, and a ranchero sauce. For structural integrity, they added a lightly grilled corn tortilla under the burger, “to keep the bread from blowing out from the chile grease,” Moore said.

There are six signature burgers available. “To me the sleeper on the menu is the Caesar burger,” Moore said. He went to grade school in Oklahoma City and ate Caesar burgers at the Split-T. An alumnus of Split-T, Johnnie Haynes, opened Johnnie’s Charcoal Broiler in Oklahoma City and still serves a Caesar burger. At Tejas Burger, chef Greg Moore makes the dressing, and tosses it with romaine, parmesan, and black pepper before topping the burger. All the signature burgers, except the Native Texan, start with a half-pound patty of ground brisket and shoulder clod. That’s seasoned with salt and pepper and smoked for an hour. “We ended up with a pit that’s a perfect burger pit,” Scott Moore said about the smoker they have out back. It has a little less airflow than their Moberg smokers and, Scott explains, “You put more smoke on meat quicker.” After the patties come off the smoker, they’re held in a warmer and then are finished on the flattop before serving.

Tejas Burger Joint cures and smokes its own bacon just for the Smokehouse Burger. It’s the signature burger in the lineup, and the bacon plus the beef fat in the grilled onions heighten the smokiness. The potato bun from Slow Dough Bread Company in Houston holds up well to the juicy patty, and the green onion aioli adds creaminess. Like all the signature burgers, it’s $14, which includes fries or onion rings. If you think that’s expensive, remember that the briskets are the same Prime grade, all-natural beef they use at Tejas Chocolate & Barbecue, and the shoulder clods are all-natural beef as well. There’s real effort going into every element of these burgers, and you can taste it.

If you’re looking for value, they also do straight-up grilled burgers at Tejas Burger Joint. A six-ounce cheeseburger, using the same beef they put into the smoked patties, is $10 with fries. Either way, Moore admits, “The math on burgers is a lot better than barbecue.” When a customer orders a half-pound of meat at the barbecue joint, that’s a half-pound of cooked meat. On the other hand, “The burger I advertise and sell is based on the precooked weight,” Moore says. He also notes that barbecue joints looking for some way to use their brisket trimmings will have a lot easier time making burger patties than sausage. “Barbecue restaurant are always searching for something that’s more profitable than barbecue, and we’ve found that with burgers,” Moore said. And since you can have a batch of barbecue burgers ready in an hour, I’d bet this smoked burger trend will only keep growing. 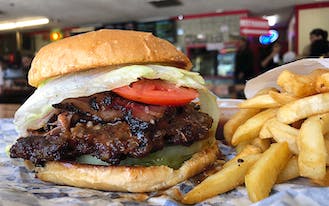 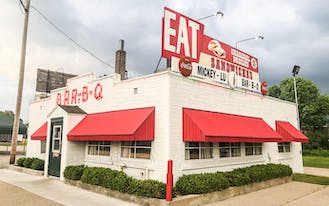