The smokers were everywhere. Co-owner Rhonda Scales had led me through a swinging door into the kitchen where a hulking rotisserie pit was churning with tomorrow’s briskets. “We use all oak,” she told me as we walked out the back door. Split oak logs were piled around two more trailer-mounted rotisseries, a Southern Pride and an Ole Hickory, that were loaded with poultry, links, and boudin. “We only use wood. The gas is just to start the fire,” Scales reassured. She said there wasn’t a single pitmaster, but rather the half dozen men we’d encountered all work as a group.

Back inside, Kevin, aka Snookie, was working the register. He was big enough that you wouldn’t dare snicker at his nickname. He also seemed impressed when I added a container of cobbler to my already large order. This being lunch, I did have to pass on the temptation of dual frozen daiquiri machines humming away on the counter next to me. 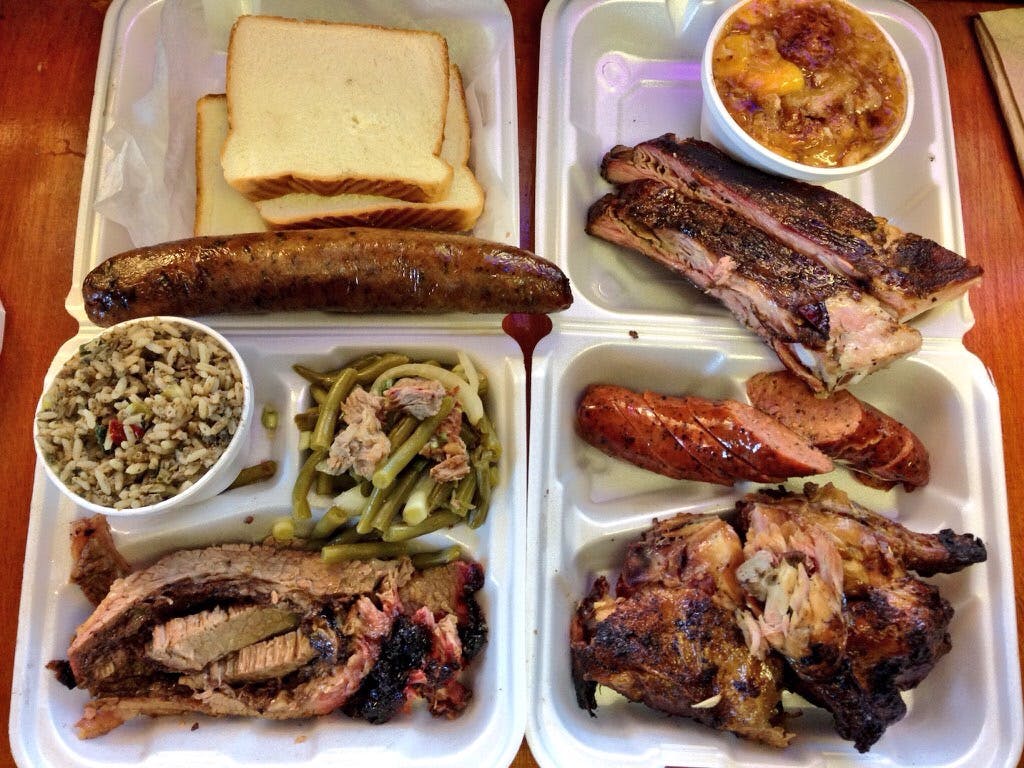 In the small dining room lined with bar seating, I inspected my haul. The sliced brisket was a grab bag of sloppy cuts – lean and fatty, thick and thin, some with flavorful bark and some shaved clean. None of it was noteworthy. A half chicken so dry it was flaky was a bigger disappointment. It was like they couldn’t bring themselves to toss it out behind the counter, so they used me as a trash can intermediary.

The rest of the meal improved rapidly. A peppery sausage link from Yoakum Packing was juicy with good smoke, but the cased meat you’ll come back for is the smoked boudain. They have this mix made for them locally and a spicy or regular version is available. The flavor was fantastic from the filling melding with the smoky casings. Unlike boiled or steamed boudin whose casings are too tough to eat, these had been crisped nicely in the smoker. I’d sooner order the original version next time as the excessive spice, largely from cayenne, didn’t come with the flavor of chiles and seemed more like a cheap thrill for those who crave the heat. 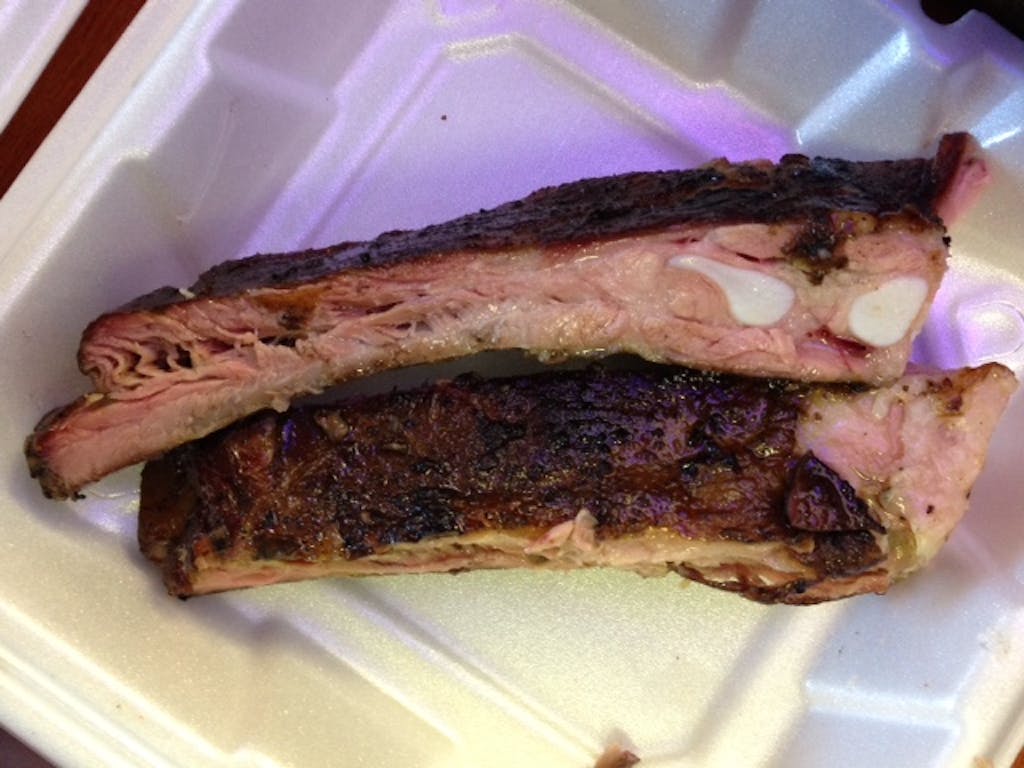 Rarely have I seen spare ribs this large and meaty that are still perfectly tender. Every bit of the smoky meat could be savored with little effort to get it off the bone. The peppery bark and juicy meat came together to form an excellent couple of ribs that were plenty for a meal on their own. But it’d be too hard to consider not getting the spicy dirty rice which rivals that of their cross-town competition, Gatlin’s BBQ, which makes one of my favorite dirty rice recipes in the state. It turned an otherwise good version of meaty green beans into an afterthought. 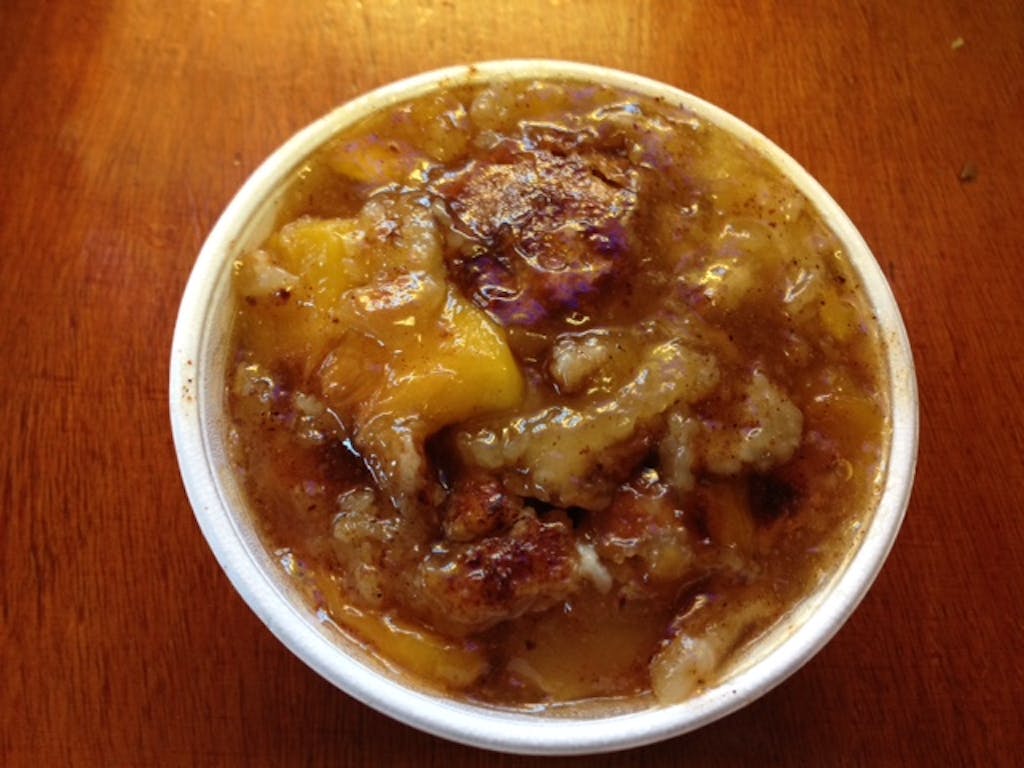 Peach cobbler was a gooey homemade version with canned peaches and loads of nutmeg and cinnamon. And like everything else at Triple J’s, you get a hefty helping of it.

Triple J’s Smokehouse isn’t perfect, but it’s certainly likable. The friendly staff and good prices can help you overlook some flaws, and avoiding a few menu items is made much easier when there are ribs and smoked boudain of this caliber. Just skip the brisket and order that dirty rice by the pound. It’ll make for leftovers that you’ll actually want.