The Texanist: Am I a Traitor If I Root for a Rival Texas Team When It Plays out of State?

Q: One of the great benefits of living in Texas is getting to eat tons of Tex-Mex, which sometimes involves eating some pretty spicy food. And one of the great benefits of eating lots of spicy food is that you develop a tolerance for it. But my coworkers recently challenged me to eat a Carolina Reaper, purportedly the world’s hottest pepper. Here’s my problem: I’m scared. Not of the pain, or of vomiting, but of doing actual damage to myself. I mean, there’s such a thing as a chemical burn, right? Is it possible to actually burn yourself with a super-spicy chili pepper?

A: The Texanist could not agree more that getting to consume copious amounts of tasty Tex-Mex is indeed one of the great pleasures of life in Texas. (And, while we’re at it, let’s not forget hot sausages, multi-alarm chilis, the peppery gravies with which our chicken-fried steaks are smothered, or the fiery dishes offered at our many Asian eateries.) Here’s to the enchiladas, tacos, taquitos, tamales, burritos, chalupas, migas, huevos rancheros, quesos, and so on. And also to the regular dinners, the number ones, the el jefes, and all the other plates and platters of this toothsome cuisine. Especially, though, here’s to the zesty salsas, both verde and roja, and the pico de gallo that tops them all off. Without these piquant sauces and dips, after all, there’d be no need for tortilla chips—or, really, a reason to keep living. The Texanist jests, of course, because, after all, there’s guacamole. The mouth waters, doesn’t it?

The chili peppers responsible for bringing the heat to the vast majority of spicy Texas cookery are anchos, chipotles, poblanos, Anaheims, Hatches, serranos, chiles de arbol, and habaneros, among a slew of others, including the jalapeño, the official state pepper and the real workhorse of Texas tongue tinglers. All of these rank on the Scoville scale, which measures a pepper’s heat. Anchos, a main ingredient in the Texanist’s chili, for example, rate somewhere between one thousand and two thousand Scoville heat units. Jalapeños come in at twenty-five hundred to five thousand. Serranos measure six thousand to twenty-three thousand. Chiltepins, the state’s official native pepper, are considerably hotter, weighing in between fifty thousand and one hundred thousand Scoville heat units. Habaneros boast between one hundred thousand and three hundred fifty thousand.

The Texanist has never forgotten his introduction to the powers of hot peppers, which came by way of dares from a mischievous older brother, who was also not beyond the occasional smear-of-jalapeño-across-the-kisser ambush. These were limited to the above-mentioned chiltepins and jalapeños, whose heat the Texanist has since come to enjoy. There are those out there, though, who crave the next-level super-hot chilis. Such foolhardy maniacs’ desire for hotter and hotter peppers has fueled an arms race of sorts among pepper cultivators, who have brought into the world the likes of the bhut jolokia (a.k.a. the infamous ghost pepper), the Naga Viper, the Trinidad Scorpion Butch T, and the Carolina Reaper.

That last pepper, the very one your colleagues have challenged you to eat, is a hellish beast, measuring more than 2,200,000 Scoville heat units. A pepper that is approximately a thousand times hotter than a jalapeño does indeed sound dangerous. Your fear of the Carolina Reaper, Blue Öyster Cult’s cowbell-inflected reassurances notwithstanding, is not unfounded. If you want to know what sort of experience you may be in for, check out the numerous YouTube challenge videos, in which everyday people consume these diminutive blast furnaces in search of fame and “likes.” It’s not a pretty picture, what with all the sweat, tears, snot, hacking, choking, hyperventilation, and desperate dairy consumption.

But just because something sounds dangerous and causes severe distress, or the appearance thereof, does not mean that it is actually hazardous to one’s health. If this were the case, nobody would ever drink flaming Dr Peppers. In search of an authoritative answer to your query, the Texanist consulted with an expert in the field, Dr. Brooks Cash, chief of the Division of Gastroenterology, Hepatology, and Nutrition at Houston’s McGovern Medical School at UTHealth, and the co-director of the Ertan Digestive Disease Center at Memorial Hermann-Texas Medical Center. Dr. Cash’s curriculum vitae, as luck would have it, also includes being a native Texan and a lover of spicy Tex-Mex.

The good doctor explained to the Texanist that there has been a wealth of research done on capsaicin, the active ingredient responsible for the heat and burning sensation experienced when hot peppers are ingested. “Aside from the misery (or, for some, ecstasy) that can come from eating super-hot peppers, there is no convincing evidence that they can damage the lining of the gastrointestinal tract,” Cash said. “But aside from the GI tract, capsaicin can cause inflammation and a very uncomfortable local reaction when exposed to the skin or other mucous membranes, as anyone who has ever rubbed their eye after handling a pepper can attest. These reactions, though, are temporary,” he added.

Dr. Cash’s final verdict was that super-hot peppers such as the Carolina Reaper are safe for the average person to consume, with the caveat that everybody responds to pain differently.

The Texanist, ever thorough, went one step further, however, and asked the indelicate question that you were apparently afraid to broach: What happens when a consumed Carolina Reaper reaches its gastrointestinal terminus? “About fifty percent of the capsaicin we ingest gets eliminated unchanged in the feces,” Cash said. “And the sensation as it is evacuated can be similar to the other unpleasant effects up top, though not typically as severe.” Cash also told the Texanist, “There is no remedy or mitigating food or medicine that will help with the symptoms down below.”

With that, the ball—potentially one of flaming hot gas—is now in your court, Mr. Allende. The Texanist cannot in good conscience advise you to chicken out, but considering the grim realities of the Carolina Reaper’s final passage (fifty percent of two million Scoville heat units is still one million heat units), neither can he advise you to proceed. Good luck, sir.

A version of this is published in the September 2018 issue.

The Texanist: Am I a Traitor If I Root for a Rival Texas Team When It Plays out of State?

The Texanist: Are Hot Sauce and Salsa the Same Thing? 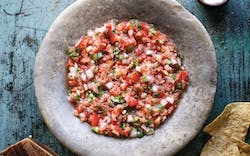 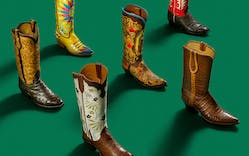 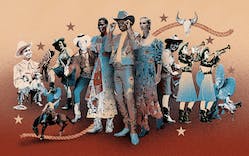