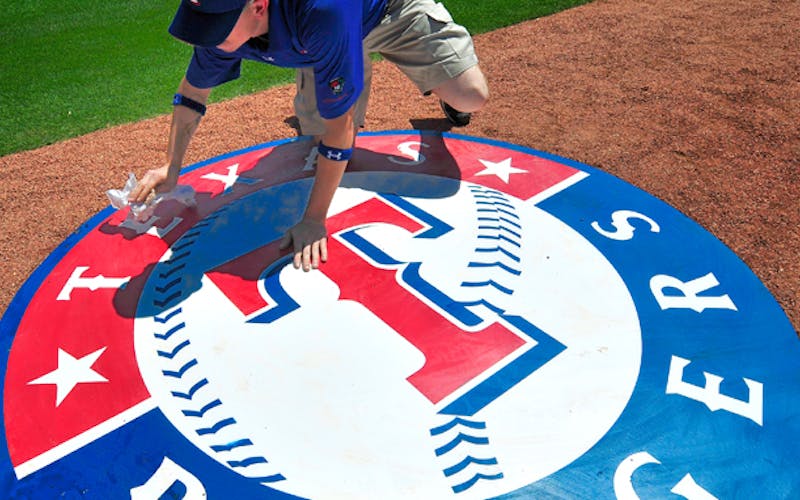 It used to be embarrassing to be a Rangers fan. The Dallas-Fort Worth Metroplex’s major league baseball team was the least impressive of the fifteen teams in the American League, having never made it to the World Series—or even come close—until 2010. Not only were they bad, but they were boring.  As Bryan Curtis wrote in 2008: “Around the country, mentioning you were a Rangers fan typically solicited . . . nothing. But it was an unsatisfying kind of loserdom.” So when he moved away from his Dallas-Fort Worth life—with its ”sunny contentment as the world passed by”—he abandoned his baseball cap (“the superior 1972–1985 model, with the red bill and the block T”). The Rangers had done their share to infuriate fans. Take, for instance, the fact that in 1998, Dallas mogul Tom Hicks bought the team for $250 million, and just three years later, in 2001, gave Alex Rodriguez a ten-year contract for $252 million. In “Spare the A-Rod,” George W. Bush, who previously owned one percent of the team while being the former managing general partner, said while campaigning for president to our own Paul Burka, “‘When you pay more for your shortstop than you paid for your team, that ought to be a warning sign that your labor costs are out of control.’”But by the time Curtis moved back to Texas as a thirty-something baseball fan, he had had an epiphany: “I had become exactly the kind of sports fan I hate: a bandwagon-riding poseur.” So he returned to his home team. It wasn’t hard. In fact, he fit right in. As he wrote, “The team’s culture was one of self-improvement, redemption, and recovery.”  Take for instance the incident in 2009, wherein beloved manager Ron Washington tested positive for cocaine. When Washington intrepidly confessed to his team, he met not with judgment or content, but with surprising support. Former Ranger Michael Young said in Curtis’s piece, “I’ve got his back. Anybody who doesn’t feel that way isn’t a Texas Ranger.” Supporting a fellow Ranger during a problem with addiction became something of a theme in 2009, when left fielder Josh Hamilton, a former alcoholic turned man of faith, had a well-publicised relapse when Deadspin posted pictures of Hamilton’s drunken night.After losing consistently in its division and suffering severe financial problems, the Rangers filed for bankruptcy in 2010. The team was sold to Chuck Greenberg and former Rangers pitcher Nolan Ryan. Despite their financial distress, the Rangers had their best season yet in the 2010 season..That year the Rangers won the American League West and advanced to postseason—for the first time since 1999. The Rangers went on to win all of the American League, only to lose the World Series title to the San Francisco Giants. Despite the disappointing end to their season, the Rangers had reinvigorated their fans and further developed the team’s brand; fans now had the iconic claw and antler hand gestures, which originated from the MLB’s All-Star Game. The next season played out similarly. The Rangers defended both their postseason titles within the American League but fell to the the Detroit Tigers in the World Series.The 2012 season left fans—both new and old—with their claws and antlers drooping with mingled disappointment. The team, leading most of the season, gave the American League title to the Oakland Athletics in the last series of the season. Then, furthering disappointment, they lost in the wild card game and waved goodbye to any chance of a World Series game.Ranger fans still hold on to hope as the 2013 season started, rallying around their team in hopes that this season will be their shining moment.