October is Texas Wine Month, and as we wander into its last couple of days, we thought we’d offer a few parting tidbits about this emerging wine region based on findings in my new book, The Wines of Southwest USA: A Guide to New Mexico, Texas, Arizona, and Colorado. This book is a culmination of coverage based on a single assignment I received back in 2008 from Texas Monthly executive editor Patricia Sharpe, who suggested I venture out into Texas wine country to see if there was anything worth writing about. Having since tasted thousands of wines, shared winemaker profiles, reported on grape-growing trends, and written myriad lists of suggested bottle selections for readers, I can confidently say that the answer to Sharpe’s question is yes. 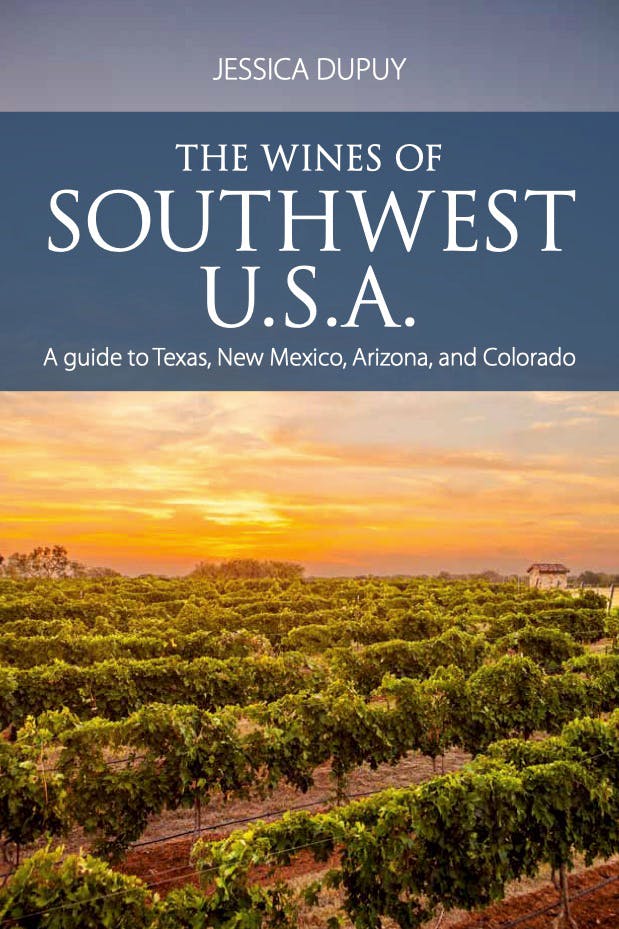 A little more than a year ago, I was approached by Infinite Ideas, a publisher based in the United Kingdom. Their Classic Wine Library series delves into the world’s most iconic and emerging wine regions—think Spain, Germany, France, South Africa, and New Zealand. They have now turned their focus to the United States, starting with the Southwestern states’ wine industries. After all, this region, not California, is the birthplace of wine-growing in the United States. They asked me if I’d be willing to expand my Texas coverage to include New Mexico, Arizona, and Colorado. To be honest, I was both thrilled and intimidated. The Southwest could fill most of the European continent; Texas is larger than France by about 20,000 square miles. Plus, this is an area of the country typically associated with cacti, cattle, and cowboys—not wine.

But I gladly accepted the challenge and spent more than a year traipsing through the vineyards of these profoundly beautiful states. I found the geography, the people growing and making the wines, and the wines themselves all to be exceedingly noteworthy. So, as we say goodbye to Texas Wine Month, I’m sharing five parting tidbits I discovered while researching this project. I hope you’ll find them equally intriguing.

The Panhandle—not the Hill Country—is home to more than two thirds of the grapes grown in Texas.

Unlike many wine regions, where the vineyards are usually located in the same place as the wineries, the majority of Texas wine grapes are grown in the Panhandle. Conversely, the overwhelming majority of wineries are elsewhere in the state, with the primary concentration in the Hill Country. This means the industry relies on two types of producers. The first is an increasing number of farmers, many of whom come from a long line of cotton farmers, who have planted vineyards to supply winemakers (the second key producer) with high-quality grapes. Though a good percentage of Texas vineyards are found in the Hill Country and other pockets of the state including Tyler, Washington County, and in West Texas, the vast majority of Texas grapes are grown in the High Plains, with around 4,000 acres (1,619 hectares) planted within this one region. Vineyard acreage in the Hill Country area is estimated to be around 1,000 (405 hectares).

The Texas Panhandle is semi-arid and desolate, with a persistent wafting of dust kicked up from the red, alkali-rich caliche soils that cover a subsoil high in calcium a few feet beneath the surface. The landscape is flat, often without a single visible rise, rock formation, or tree for miles. Historically, this vast expanse has been home to seas of cotton, peanut, and row-crop fields. But in recent years, those landscapes have been interrupted with the occasional flourish of vineyards. While many experts might take one look at this uninspiring, dust-covered region and conclude that it’s not ideal for cultivating vines, you’ll find more than three dozen grape growers who can prove those assumptions wrong.

The Southwest, including present-day Texas, was the first region in the country to have significant plantings of European grape varieties, or Vitis vinifera—predating California by more than a hundred years.

While Vitis vinifera was first planted in what is now New Mexico, in 1629, it’s fair to say that Texas was likely next. Those first vines were planted within miles of the future border between the two, when the area was part of New Spain. The first settlement around El Paso was established in 1659, and according to Thomas Pinney in his book A History of Wine in America: From the Beginnings to Prohibition, by 1744 one Franciscan monk was writing that orchards and vineyards were flourishing.

Are You Ready for Fine-Casual Dining?

In the early nineteenth century, wines from El Paso, referred to as “Pass Wine,” became popular among Santa Fe traders. In fact, according to Pinney’s book, El Paso wine had become the only revenue-producing crop in the whole province of Spanish New Mexico, of which El Paso was a part at the time. Wines during this era were in one of three styles: a high-quality light red wine; a lower-quality darker wine, the Pass Wine; and a lesser-quality, low-price wine.

Before European varieties were planted in Texas, a handful of native grape varieties were already flourishing in the state, and a few remain star performers.

East of El Paso, much of the state had already begun experimenting with native varieties such as the mustang grape (Vitis candicans/Vitis mustangensis), which was said to make tolerable red wine and decent port-style wine. In addition to mustang, muscadine (Vitis rotundifolia) and black Spanish saw a rise in popularity. Although no significant commercial production of wine ever came to pass, the use of wild and hybrid varieties continued among local hobbyists throughout much of the nineteenth century. Vitis vinifera plantings were virtually nonexistent by the end of the century except for a 200-acre (80.9-hectare) planting by Italian immigrants near the town of Laredo.

The black Spanish grape has a long history in the southern United States. The black-skinned grape variety has gone by many names, including Lenoir, Jacquez, Jack, blue French, Ohio, and El Paso. While it has long been accepted as a native grape of Texas, the origins of Black Spanish remain murky. The National Grape Registry identifies its lineage as a crossing of Vitis aestivalis, Vitis cinerea, and Vitis vinifera. Its American wild grapevine parent is Vitis berlandieri, the same variety whose rootstock Thomas Munson sent to Europe to help solve the phylloxera dilemma in the late nineteenth century.

Known in French as a teinturier variety, black Spanish is one of the few red varieties whose juice is naturally pigmented, similar to alicante bouschet, dunkelfelder, and saperavi. The resulting wines are rich in color and concentration, with notes of jammy blackberry and spice. The grape’s dark, juicy flesh yields wines that are sometimes musky on their own, but pleasurable when made into sweet, fortified wine with notes of cherry and chocolate.

Though its name may lead many to assume this variety hails from France, Blanc Du Bois is actually a white hybrid grape that has primarily been planted throughout the southeastern United States. It was developed in 1968 by Texan John Mortensen at the University of Florida as a crossing between Florida D 6-148, and Cardinal, a California table grape. The name Blanc Du Bois—with both capital “D” and “B”—was given in honor of Emile DuBois, a French viticulturist and winemaker who migrated to Tallahassee, Florida, in the early 1880s.

According to a 2019 report by the United States Department of Agriculture, Blanc Du Bois has overtaken other white varieties such as muscat and viognier as the most planted white grape in Texas, accounting for 15 percent of total white grape plantings. More than 40 percent of it is planted in the more humid parts of the state to the east and southwest, closer to the Gulf of Mexico.

Offering distinctive floral aromas with notes of tropical fruit, citrus, honey, and stone fruit, Blanc Du Bois can produce refreshing, crisp dry and sweet styles of wine. Producers such as Haak Vineyards & Winery have been early champions of the grape, growing it in their estate vineyards near the steamy Gulf Coast in Santa Fe, Texas. Haak is the largest producer of Blanc Du Bois in Texas, offering a range of balanced dry, semisweet, and sweet table wines. Haak has also garnered a reputation for Madeira-style dessert wine made from Blanc Du Bois as well as black Spanish.

The Southwest Texas town of Del Rio is home to the oldest winery in the state.

Here, Italian immigrant Frank Qualia took note of the native Lenoir grapes growing wild in the region and used cuttings to plant a family vineyard in the calcium-rich loamy soils of South Texas. In 1883, he opened Val Verde Winery, named for the county in which it is located. Today, the fourth-generation operation can claim the distinction of being the oldest continuously operating winery in Texas, having survived Prohibition by making sacramental wine for church services.

Today, the Qualia vineyard still has a few Herbemont vines, as well as some Blanc Du Bois, but is almost exclusively black Spanish, including vines that date back more than 120 years. The winery also makes wines using grapes from vineyards in the High Plains and Escondido Valley.

Around the turn of the century, Texas forever became an integral part of global wine history. During the late nineteenth century, an invasive root louse known as phylloxera had infested and destroyed hundreds of thousands of acres of vineyards throughout France and other parts of Europe. All efforts to eradicate the pest had failed. But in the late 1880s, Thomas Volney Munson, a grape horticulturist and researcher in Denison, Texas, delivered a saving grace. By grafting European grape varieties to the rootstock of a particular native Texas Hill Country variety, Vitis berlandieri, along with two other American varieties, Vitis rupestris and Vitis riparia, which were resistant to phylloxera, the vineyards could be saved.

Today, the majority of grapevines in France, as well as throughout Europe, are grown on the resulting grafted rootstocks. In the case of Vitis berlandieri, specifically, the rootstock crossed with chasselas resulted in the highly regarded rootstock 41B, which would replant both the Champagne and Cognac regions. In the coming years, other American stocks would also provide manageable options.

Munson’s research and contribution to solving the French phylloxera dilemma would earn him the Chevaliers du Mérite Agricole in the French Legion of Honor in 1888, a distinction that is typically reserved for French Nationals. He later received national recognition for his comprehensive Exhibit of American Grapes at the 1893 Exposition in Chicago. The exhibit was subsequently given to the United States Department of Agriculture in Washington, D.C., and was the most extensive and most accurate single collection of grape species ever made. By 1900, it is estimated that two thirds of French vines were bound to American roots. Today, nearly all grapevine rootstocks used worldwide rely heavily on native Texas grape species.

The Secrets of Bonfire Shelter

Three Texas Brands Pay Homage to the Spirits of the Desert

The Quirky History of the Osage Orange, Texas’s Ugliest Fruit

It’s a Bird! It’s a Plane! It’s Barbette, a Gender-bending 1920s Aerialist From Round Rock