Vodka’s popularity in the U.S. is relatively recent, having picked up steam only in the decades following World War II. Unfortunately, Americans’ appreciation for the noble spirit too often trends toward artificially flavored vodkas, like strawberry shortcake or whipped cream.

But there is a long and honorable Eastern European tradition of flavoring vodka with fruits, spices, and herbs. One such example, native to Poland and Belarus, is zubrowka, in which rye vodka is seasoned with a tincture of bison grass, a fragrant herb also known as sweetgrass. Zubrowka has a flavor that faintly suggests chamomile, with hints of vanilla and almond. Though available in many parts of the world, traditional production methods for bison grass vodka leave behind trace amounts of a compound known as coumarin, thus running afoul of the FDA, which has banned the substance because of its alleged hepatotoxic (liver-damaging) properties.

Dallas bartender Colin Phillips was turned on to the spirit by a Polish girlfriend while living in England. She also introduced him to the classic Polish highball known as szarlotka (“apple pie”), made of bison grass vodka and unfiltered apple juice. To update the drink for Design District hot spot FT33, Phillips turns to an Americanized version of zubrowka (formulated to eliminate the coumarin), along with baked-apple bitters and a shrub he makes with Honeycrisp apples; the apples are macerated with sugar and then fortified with an apple cider vinegar from Dallas brewer Barrett Tillman. Lemon juice and club soda give structure to the tart, crisp cocktail, making it an antidote to both cold winter nights and tired winter drinks.

Combine first four ingredients in a cocktail shaker and shake with ice to chill. Add the club soda to the shaker, then strain onto ice in a Collins glass. Garnish with apple slices.

Chop 1 pound of unpeeled Honeycrisp apples and layer with half a cup of sugar in a covered glass jar. Agitate daily, allowing the sugar to absorb the juice from the apples. After about 1 week, strain out the solids and capture the juice. Fortify the apple-sugar mixture with local cider vinegar to taste, about 1 ounce of cider vinegar for every pint of liquid. Cover and keep for up to 1 month in the refrigerator. 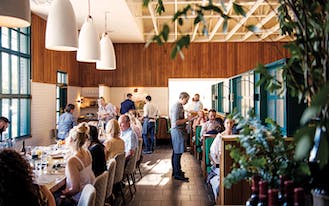 Matt McCallister Comes Back Strong With Homewood in Dallas