Before there was a Texas, there were tamales. We know this instinctually, because there’s something ancient about just eating one: to peel back the coarse corn husk and gaze upon the steaming bundle of golden, meat-filled masa inside—simple, nutritive sustenance—is like unwrapping a gift from centuries past. Indeed, tamales trace their roots to pre-Columbian Mesoamerica, where peoples such as the Aztec and Maya stuffed mounds of ground maize with berries, bugs, and iguana, then cooked them in corn husks or leaves. Around 1520, the Spaniards arrived and, as was their wont, mixed things up: They introduced pigs and cattle, and thus new tamal fillings. What they didn’t change, though, was the essential role of tamales as communal, celebratory fare. Back then, tamales were the ultimate party food, and as any Texan who has taken a bite of steaming, pork-stuffed masa at a wedding, baptism, or holiday get-together knows, we are the fortunate heirs of this tradition.

How to Make It

The sweet, pungent aromas of corn, chile, and pork are, for many of us, the smells of the holidays, and the labor-intensive act of making tamales is itself cause for an all-hands-on-deck fiesta. If you’ve never thrown a tamalada, now’s the time to speed-dial your siblings, cousins, roommates, and neighbors. “Do not make tamales by yourself,” says South Texas cookbook author Melissa Guerra, who also owns a cookware shop in San Antonio. Guerra has been hosting family tamaladas at her ranch near Edinburg for almost fifteen years, and the point of making tamales, she insists, is a connection with others—to laugh, gossip, and renew old ties. Even so, there’s a job to do, so keep in mind these tips: (1) Collect your ingredients a day or two in advance and cook the filling ahead of time, to allow the flavors to marry. (2) For the best taste, forget using a dry mix for your tamal dough and instead get it fresh at a tortillería or Mexican supermarket. Buy it first thing in the morning, then get to work right away, because masa can spoil by the afternoon. “If there’s a sour whiff, throw it out,” says Guerra. “Masa should smell sweet and earthy, like before a rain.” (3) Soak corn husks in warm water for an hour or two before your tamalada so that they’re pliable, then call your helpers over, turn up some Flaco tunes, and form an assembly line. You’ll need volunteers to spread masa on the husks, spoon filling onto the masa, wrap and fold the laden husks into packages, and load these into a pot for steaming. Discuss specifics, like how thinly or thickly to apply the masa, and assign clear roles. You want people to come back next year. (4) Use a light touch; spreading masa is notoriously difficult, and many a husk has been torn by too firm a hand. “Masa isn’t peanut butter,” says Guerra. Use a metal spoon or silicone spatula and stroke gently. (5) Save your arguments, nitpicking, and huffs for another day. Tradition says that if you are not in good spirits while making tamales, they will not cook properly. So roll up your sleeves, settle in, and have fun. —KR

Special equipment: large steamer pot with a basket and lid (such as a lobster steamer or a stockpot with pasta insert) or even a bamboo steamer for just a few tamales

Place pork in a 4-quart saucepan. Cover with water, add remaining ingredients, and bring to a boil. Reduce heat and simmer, partially covered, until juices are clear when meat is pierced with a fork, about 30 minutes.

Fill a 4-quart saucepan with water. Bring to a boil and add chiles. Boil until tender, about 15 minutes. Drain, discard stems, and put chiles in a blender. Add garlic and reserved pork broth and purée, adding more broth if necessary. Pass the purée through a strainer to extract seeds.

Heat lard in a large skillet over medium heat. When melted, add pepper, cumin, and salt and sauté for 10 seconds. Add the chile purée and sauté for 2 minutes. Add the reserved chopped pork, combining well. Adjust the seasonings as desired. Simmer for 10 minutes, then remove from heat. Set aside. (Filling may be prepared a day ahead; once cooled, it may be frozen.)

Masa should be purchased premixed with water but not lard. Put it in a large bowl, and, using your hands, knead in your own lard and salt. Add pork stock a little at a time and continue kneading until the masa is cohesive and smooth to the touch.

Dry off a handful of husks and place within reach, discarding those that are too narrow and tearing strips off the ones that are too wide. (The bottom edge of each husk should measure about 8 inches.) Take a husk and thinly spread the bottom two thirds with 2 or 3 tablespoons of the masa, leaving a 1 1/2-inch-wide strip along one edge uncovered. Down the middle of the masa, following the direction of the corn husk veins, place a row of pork filling (about 1 tablespoon). Now fold the masa-covered edge of the husk over the filling and roll it up toward the edge of the husk with no masa. Fold down the uncovered top part of the husk. Repeat until all the tamales have been made.

Fill steamer pot with water to bottom of basket and bring to a boil. Fill basket with tamales, placed vertically with folded end down. Cover tamales with extra corn husks, then with aluminum foil. Place basket in pot, over the boiling water. Secure lid of steamer, using additional foil around edges to keep steam from escaping. Steam until masa is firm, adding water if it gets too low, about 40 minutes. Makes 4 dozen tamales. 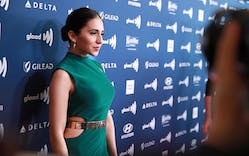 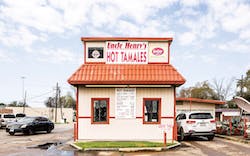 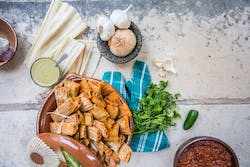 Love and Masa: 45 Years of One Family’s Tamalada

By Kathy Blackwell and Knoxy Knox