“What passes for a margarita looks like a Slurpee, tastes like a limeade, and packs as much kick as the punch at a Baptist wedding reception.” It was back in 1979, in “Requiem for a Margarita,” that this magazine made that sad declaration. And it is with heavy heart that I report that not much has changed. It’s a pitiful concoction that masquerades as a margarita these days: a soupçon of tequila drowned in a sickly sweet brew that’s never known a squeeze of fresh lime. It says a lot about the state of our favorite cocktail that, in two unrelated instances, waiters at different Applebee’s restaurants served a margarita (perhaps from a mislabeled container of—gasp!—premade mix?) instead of apple juice to an unsuspecting toddler. One of the mothers told a local newspaper that she knew something was amiss when her fifteen-month-old, after “saying hi and bye to the walls,” dozed for a bit, then “woke up and got real happy.” The good news is, the little guy is okay. The great news is, ­Applebee’s puts tequila in its margaritas.

Like the daiquiri and the martini, two esteemed cocktails that have been subjected to their own degradations, a proper margarita is simple and formidable, a bracing drink that carries a hell of a payload (it is just alcohol and juice, after all). But unlike gin or rum or vodka, tequila—lucky devil—lends itself to fewer adulterations, because it doesn’t always play well with others. Wrested from the heart of a majestic, cranky desert plant, it’s an ornery spirit, multilayered and temperamental. A careful hand can play with its fire, so to speak—add a little sweet here, a little sour there—and turn it into something truly sublime.

Which is why the much-­ballyhooed revitalization of the craft cocktail is such a welcome thing. Contrary to what you may have heard, this boozy renaissance is less about mustachioed “mixologists” in short pants fussing over esoteric ingredients and confounding concoctions than it is a return to the kind of well-made drink our grandparents would recognize. It’s a realization that a great cocktail requires fresh, high-quality ingredients, a little extra effort, and lots of love. And it’s about time the long-suffering margarita got in on that action.

But getting back to basics doesn’t mean we can’t play around with our unofficial state drink. With that in mind, we enlisted bartenders from three of the newest bars in Texas to come up with a variation on the margarita. And we start with a refresher course on what the original is supposed to look and taste like. Get yourself reacquainted with the real deal, then give one of these a try. On deck is a refreshing caipirinha-style elixir conjured up by San Antonio’s Bar at Bohanan’s; a frothy cucumber-­jalapeño libation from hot spot Cedars Social, in Dallas; and an unortho­dox brew from Austin’s Bar Congress that a fellow recipe tester likened to “drinking a volcano—in a good way.” ¡Salud!

Innumerable are the creation stories associated with the margarita, and so too the opinions on how to drink one. Rocks or frozen? (Answer: up.) Mexican lime or Persian? Plata, reposado, or añejo? Salt or no? (¡Claro que sí! ¡Un tequila sin sal es como un amor sin besos! ) As with many things, the best margarita is the one you like. That said, there’s a pretty strong consensus as to the building blocks of a perfect margarita: tequila (preferably silver), lime juice (preferably from Mexican, or Key, limes), and orange liqueur (preferably Cointreau). The recipe below is a guideline, so experiment a little to find the ratio that suits your taste. The trick is getting all the components working in harmony. And since those components can vary widely (the limes alone are a crapshoot), it’s a good idea to test your creation and make adjustments if needed. Finally, approach gingerly. This makes a wee, potent drink (like a martini, it’s meant to be sipped from a small chilled glass). If you find it too strong, you can always go lighter on the tequila or serve it over ice.

Combine all ingredients in a shaker, shake with cracked ice, and strain into a chilled, salt-rimmed coupe or martini glass.

Born in Oak Cliff, Craig Reeves has been bartending for 25 years, mixing up drinks for Craft Dallas and Los Angeles, the Mansion on Turtle Creek, and Iron Cactus before landing at five-month-old Cedars Social, a cozy haunt where the drink list is longer than the food menu. The self-proclaimed “culinary school dropout” runs the bar program with fellow cocktail guru and Mansion alum Michael Martensen, and their MO is as simple as can be: “Make great drinks and educate people on how to drink them.” His aptly named Fuego Fresco embodies that philosophy, a gossamer potion whose sprightly cucumber makes a perfect foil for a hit of jalapeño that lingers like a Texas summer.

Muddle the jalapeño and cucumber in a shaker with a pinch of salt. Add tequila, lime juice, simple syrup, and egg white, and dry-shake (without ice) to emulsify the egg white. Add ice and shake again. Strain into a chilled coupe or cocktail glass, and garnish with a slice of cucumber sprinkled with chile-lime salt. Serve with a salted rim if desired.

“It’s about being willing to reach past a glass that’s not the perfect temperature for one that is.” And there you have the bar according to Scott Becker, general manager of one of San Antonio’s finest steakhouses and unabashed champion of the “honorable craft” of bartending (he can’t abide the term “mixologist”). The Bar at Bohanan’s is a late addition—it opened in 2009, when the storefront below the nine-year-old restaurant came available—but it’s far from an afterthought. The principals knew from the beginning that they wanted to match the philosophy of the mother ship: Get the best-quality ingredients and, as Becker puts it, “don’t screw them up.” With that in mind, they went to cocktail evangelist Sasha Petraske, whose New York–based Milk and Honey got us all on the path to better drinking a decade ago. Hired as a consultant, Petraske developed the Bar at Bohanan’s drink menu, trained the bartenders, and makes regular visits to the Alamo City. And lucky for us, he loves tequila. Modeled on a caipirinha, this fruity, sunset-hued beverage puts the good stuff front and center.

Muddle lime and orange in a shaker. Add simple syrup and tequila, and shake with cracked ice. Use a straw to test for acidity, and add more orange or simple syrup to sweeten as needed. Pour (don’t strain) into a chilled rocks glass, and add ice. 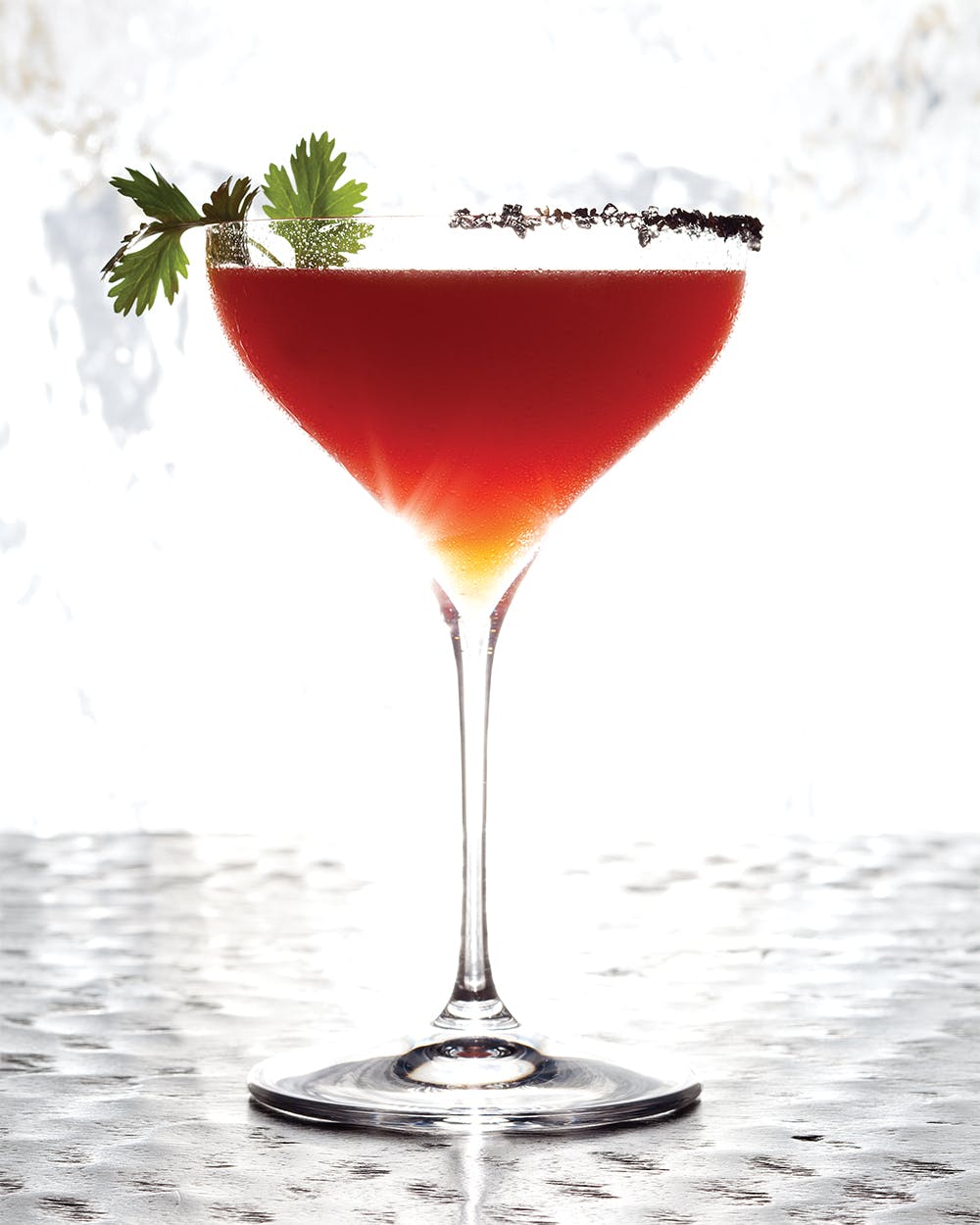 Of the many comments made while testing the recipe for this unusual contribution from Elizabeth Lopez, a bartender at six-month-old Bar Congress, the most memorable was undoubtedly “What the hell am I drinking and why can’t I stop drinking it?” Originally from Dallas, Lopez made her way north, where she earned a master’s degree in painting and drawing at the School of the Art Institute of Chicago before returning to Texas to defrost. Upon landing in Austin, she helped open the bar at Uchiko, then signed on at Bar Congress, a place where she can indulge her creativity using a whole different palette. “An artist needs good tools to do good work,” she says, and this explains a lot about her approach to this drink in particular. The Vesuvian mélange hits your senses on a number of levels—pepper and salt and sugar and smoke, all buoyed by the delightfully vegetal cilantro—­and is both enticing and confounding. Kind of like a great work of art.

Rinse a coupe glass with the Lagavulin, and then rim half the glass with a mixture of lava salt and smoked black pepper. In a shaker combine the rest of the ingredients with ice, shake, and double-strain into the coupe. Garnish with 2 sprigs of cilantro.