When the Fort Bend Independent School District announced that it had found the remains of 95 people on the construction site for its new James Reese Career and Technical Center in Sugar Land on July 16, the discovery made national and international news. But the remains, thought to be part of an unmarked cemetery for black convict laborers who worked on sugar plantations there in the late nineteenth century—chains were also discovered in the cemetery—were no surprise to Reginald Moore. The local activist has lobbied the city of Sugar Land for decades to recognize the black slaves and convict laborers who worked the sugar plantations that gave the town its name.

Texas Monthly caught up with Moore this week to hear about his emotions when he viewed the remains, his contentious relationship with local officials, and what he hopes will happen to the exhumed bodies.

Texas Monthly: What were your thoughts when you saw the excavated cemetery?

Reginald Moore: It was overwhelming. The way these people were brutalized and all the things that happened to them—for them to finally get the recognition for what transpired during that period of time, I was grateful for it. I was grateful that they were finally being recognized by the city, the county, and the state. It felt like I knew these people, like I was seeing relatives. It was personal. To actually see the people I was advocating for, it was powerful. It takes a lot out of me, even now when I talk about it. I went through a lot of pain.

TM: For a long time, local officials didn’t look into your concerns and even barred you from this site. Now it seems they’re finally starting to take you seriously.

RM: I don’t know if it’s sincere or because the pressure has been on because of the national publicity. I invited a lot of city and county officials to a Memorial Day event earlier this year. I reached out to them, trying to offer an olive branch. The mayor and the city council were at the event, so I think that opened a lot of doors. Before that, they fought me, ran me off, and didn’t want to have anything to do with me. Now the Sugar Land Heritage Foundation is saying they want to display artifacts from the cemetery.

TM: Is that what you want?

RM: No, sir. They didn’t have anything to do with it. The chains that have been found should be in our museum [Moore has been lobbying Sugar Land officials, so far without success, to build a museum dedicated to convict labor]. The Sugar Land Heritage Foundation doesn’t have any of the work that I’ve done—it’s all at Rice University. I’ve done research in museums all over the state and gathered all this archival material. It’s a bunch of people [at the Heritage Foundation] who are trying to sanitize the Kempner family and the city of Sugar Land. [Isaac Kempner was the co-founder of the Imperial Sugar Company, which created the company town of Sugar Land.] They want to piggyback on my work. [The Sugar Land Heritage Foundation did not immediately respond to a request for a response.]

TM: What do you think should be done with the bodies that have been discovered?

RM: I want them to be interred in the Old Imperial Farm Cemetery  [a nearby cemetery for inmates of the former Imperial State Prison Farm]. I’m the official guardian of that cemetery. But first, they need to do some research on the Old Imperial Farm Cemetery to make sure there aren’t more bodies there. They need to use a magnetometer to see if there are any more bodies in there. To do that, they have to scrape off the topsoil. Fort Bend ISD and the city of Sugar Land say they want to work with me.

TM: Do you think there are more graves still to be discovered on the James Reese Career and Technical Center site?

RM: Yes. The whole area used to be a prison camp, and they haven’t done adequate studies on the land. I believe there are other cemeteries with more bodies. A lot of homes in Sugar Land are built on unmarked cemeteries. People may not want to hear that.

TM: Is the Fort Bend ISD’s James Reese Career and Technical Center still going to be built despite the discovery of this cemetery?

RM: They’re already building it. They’ve got the steel framework up and they’re putting the siding on. I wanted them to stop, because I feel like maybe there are more bodies under it. I don’t think they went deep enough. They say there aren’t any more bodies—I don’t agree, but I’m having to accept it. I can’t win all the battles. Now they’re saying they’re going to set aside some space in the building for educational materials about the cemetery—they’re trying to rebrand the center, because they’re getting all kinds of heat from the public and the media.

TM: How would you like to see Fort Bend ISD and Sugar Land commemorate the convict leasing system and this historical cemetery?

RM: I’ve been trying to get them to build a freestanding museum on the site. Not something done by the Sugar Land Heritage Foundation, but a freestanding museum that tells the history, tells about the abolitionists, tells about prison reform. We’ve got more people in prison today than during slavery. The people who benefited from the convict leasing system should pay for it—the Kempner family, the county, the state, and the federal government.

TM: Have you received an apology from Sugar Land or Fort Bend ISD for the way they’ve treated you? 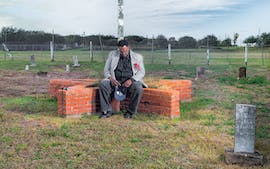