The debate over whether Texas should expand its Medicaid program is still raging. Funding the current program, though: that much we can do. The proof came on Tuesday, when the Senate passed its version of HB10, the first supplemental appropriations bill of the session. The bill, which the House of Representatives passed last week, allocates about $4.7 billion from the state’s general revenue accounts to pay for Medicaid spending in the current (2012-2013) biennium.

That the bill passed was the opposite of a surprise. In 2011, the 82nd Legislature, facing a yawing shortfall, tacitly recognized that the budget they ended up passing meant that the 83rd Legislature would have to quickly provide for the agencies that would otherwise run out of cash before the end of the fiscal year. (In addition to shoring up the state’s Medicaid spending, HB10 undid a couple of the accounting tricks that the legislators had, in 2011, used to make their numbers work out.)

Both the House and Senate passed the bill unanimously. For the House, the unanimous vote in favor of the supplemental spending was a sign of that chamber’s newly cooperative ethos; the House has historically been rowdier than the Senate, and the House has at least a handful of tea party-type Republicans, who might have been expected to throw a fit about extra spending.

Still, it was apparent that the mutual suspicions of the last session have not entirely abated. That was clear in the Senate, during a lengthy and somewhat testy exchange between Wendy Davis, a Democrat from Fort Worth, and Tommy Williams, a Republican from The Woodlands and chair of the Senate Finance Committee.

The key issue was public education funding, which was cut by $5.4 billion in 2011. The state’s overall budget had been severely cut last session, of course—but for many Democrats, at the time and now, the cuts to schools suggested a political agenda more than a simple abundance of caution. Texas Republicans are clearly committed to fiscal discipline. Few would question that, outside of the Michael Quinn Sullivan crowd. In recent years, however, they have also been talking up a number of educational reforms, and now that the state’s revenue outlook has improved, they are apparently keen to use some of the money in new ways, rather than simply restoring the funding that was cut.

For Republicans, this is just common sense: they had no choice but to cut the education budget, and now that circumstances have changed, the state might as well look for efficiency gains. Democrats are suspicious, however. They are also emboldened on ths point: when the comptroller released her biennial revenue estimate, she estimated that Texas would end the 2012-2013 biennium with a surplus of $8.8 billion. In other words, the state would have had suggesting that the state would have had the money to maintain school funding, plus several billion dollars extra. Last week Mark Strama, speaking at a panel discussion hosted by the LBJ Future Forum, offered a withering critique of the suggestion that Republicans had no choice but to be cautious. In 2011, Representative Donna Howard, also a Democrat from Austin, had proposed a measure that would have allowed the Lege to restore some of the school funding if receipts came in higher than the comptroller projected. In other words, Strama argued, Howard had come up with a way to get around the constraint imposed by its part-time legislature—and her measure died in conference committee.

Today, in any case, Democrats would like to see funding restored, and as soon as possible. Davis’s point, in the Senate debate, was that the supplemental appropriations bill presented an opportunity to do so. The effects of the cuts were palpable across the state, she observed, and ran through some numbers how many educators had lost their jobs in several of her Republican colleagues’ districts. The state could, she suggested, take several billion dollars from the thriving rainy day fund and use that to pay for some of the health expenditures that HB10 addresses, freeing up the corresponding amount of general revenue funds to restore some of the school funding.

Williams had several objections to that suggestion. For one thing, he said, the Lege usually doesn’t address supplemental appropriations bills until later in the session. The reason they were taking up HB10 was that otherwise the state Department of Health and Human Services, which administers Medicaid, was going to run out of cash—possibly as soon as mid-March. Barring an acute issue, then, Williams still thought a cautious approach was better, and accordingly, that any supplemental appropriations to schools should wait until the second bill on the subject, later in the session. As for school finance, Williams predicted that a full discussion of that subject would have to wait for a special session, in 2014, after the state supreme court gives its ruling on the pending lawsuits.

Finally Davis asked directly: did Williams think the legislators would have cut public education by $5.4 billion if they knew there was going to be an $8.8 billion surplus at the end of the biennium. “Senator Davis, the comptroller makes the revenue estimate, and we can only work within that,” said Williams. “I don’t mean to be trite about it, but my grandfather used to say, ‘If ifs and buts were candy and nuts we’d all have a Merry Christmas.”

On Tuesday, at least, Williams won the battle, but it may come to seem like an early skirmish in a long campaign. 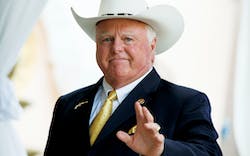